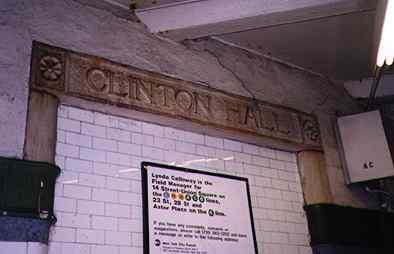 What’s that bricked up doorway with “Clinton Hall” carved above it on the southbound platform at the Astor Place (#6) station all about? Where did it go?

There really was a Clinton Hall, and it’s still standing at the triangle of Astor Place, East 8th Street and Lafayette Street.

When the Astor Place station was finished in 1904, part of it was beneath the building at 13 Astor Place known as Clinton Hall. Clinton Hall was home to the Mercantile Library Of New York from 1855 to 1932. The original building was formerly the Astor Place Opera House, made infamous in 1849 when rioting broke out between anti-British supporters of American actor Edwin Forrest and wealthy patrons of English actor William Macready. 20 people were killed when the Seventh Regiment National Guard fired on the rioters. A more complete account of the riot can be found in Luc Santé’s excellent book, Low-Life. 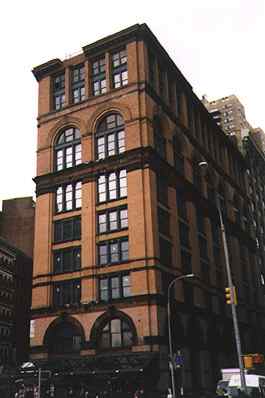 The old opera house, the original Clinton Hall, was torn down in 1890, and a new, 11-story Clinton Hall (right) was built in its place on the site to house the library. The building was considered important enough to have its own entrance to the subway when it was built under the building in 1904. In those days, admission to the subway was by ticket; turnstiles and tokens were still a few decades in the future.

The Mercantile Library was to fall on hard times. As taxpayer-supported libraries began to appear, its importance diminished. The library left Clinton Hall in 1932 and moved to 17 East 47th Street, where it remains.

Presumably, the doorway and staircase connecting Clinton Hall and the subway platforms were bricked up in the 1940s.

Clinton Hall itself was converted to condominiums in 1995.

[…] On February 8, 1866, during a meeting at Clinton Hall on Astor Place in New York, Bergh pleaded on behalf of “these mute servants of mankind.” According to the The Sun, Bergh impressed attendees with his indignant recollection of a family watching a bullfight in Spain and details of inhumane practices in America, including cockfighting and the horrors of slaughterhouses. To his audience, which included some of Manhattan’s most powerful business and government leaders, Bergh stressed, “This is a matter purely of conscience; it has no perplexing side issues. It is a moral question in all its aspects.” Clinton Hall, formerly the Astor Place Opera House and located at 13 Astor Place, was home to the Mercantile Library Of New York from 1855 to 1932. For more information, visit Forgotten New York. […]

[…] the melee. Clinton Hall was converted into condominiums in 1995, though remnants can still be found if you know where to look. Manhattan: the Harlem Opera House, 209 W. 125th Street, undated. George P. Hall & Son […]