Located under City Hall Park is the world’s most beautiful former subway station. It is located at the south edge of the loop that turns Lexington Avenue IRT locals (#6) around to the south of the Brooklyn Bridge station. It’s been closed to the public since 1945. It can be seen by staying on the #6 local after the end of the line riding southbound, and looping around to enter the Brooklyn Bridge station northbound, provided the motorman allows you to do so.

Not too long ago, the Transit Museum conducted occasional tours of the old station, but these were eliminated in mid-1998 because of growing concerns of the Giuliani administration over possible terrorist attacks on City Hall, which stands above the station.

Over the years, the station has fallen into disrepair with rust and water damage. But enough remains to show that this was once the crown jewel of the subway system. 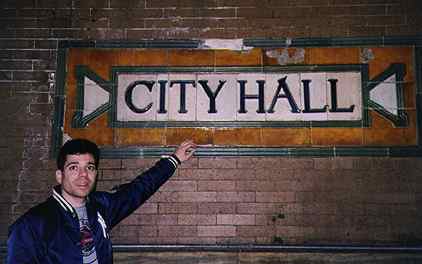 Forgotten Fan Vincent Losinno displays the City Hall station’s nameplate. The station, including all signage, was designed by the architectural firm of Heins and LaFarge, who had earlier designed the Cathedral of St. John The Divine and several buildings in the Bronx Zoo. For their work in the NYC subway, beginning in 1901, they were paid an annual fee of just $2500!

The subways of New York City officially opened for business at 7 PM on the evening of October 27, 1904, at the City Hall station, but only after Mayor George McClellan had taken the first car on the line out for a spin, much to the chagrin of nervous IRT officials.

Clifton Hood describes the scene on opening night in his book 722 Miles: The Building Of The Subways (Johns Hopkins University Press, 1993):

The night took on a carnival atmosphere, like New Year’s Eve. Many couples celebrated in style by putting on their best clothes, going out to dinner, and then taking their first subway ride together. Some people spent the entire evening on the trains, going back and forth from 145th Street to City Hall for hours. Reveling in the sheer novelty of the underground, these riders wanted to soak up its unfamiliar sights and sensations for as long as possible. In a few instances high-spirited boys and girls took over part of a car and began singing songs, flirting, and fooling around. The sheer exuberance of opening night proved to be too much for others; although they bought their green IRT tickets and entered the stations like everyone else, these timid passengers were so overwhelmed by their new surroundings that they did not even attempt to board a train. All they could do was stand on the platform and gawk.

The crowds that sent the first IRT train from City Hall Station are gone, and have been gone for 55 years. But if you stand on the ghostly, deserted platforms now and listen especially hard, you might just hear an echo. 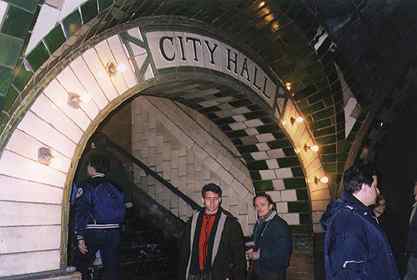 The City Hall station is usually not this populated! But on this day, the NYC Transit Museum was conducting a tour of abandoned stations and City Hall was on the itinerary.

Heins and LaFarge incorporated several design items they used at the Bronx Zoo into the City Hall station. These included such techniques as arches, vaulted ceilings, and polychrome tile.

House and Garden magazine was effusive with its praise in describing the City Hall station:

“The broad structural vaults satisfy the esthetic and scientific imagination that a necessary strength has been created underground in the proximity of the Post Office and the skyscrapers of Park Row. Moreover the sturdy forms here and the restraint of ornament are suited to the workaday heart of ‘downtown’, where the daily rider will be quickly swung to his office on these smooth curves and as gaily spirited away.” 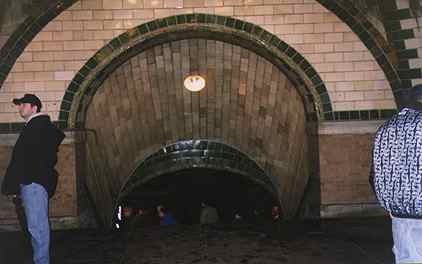 View from the lobby which led down to the platform. 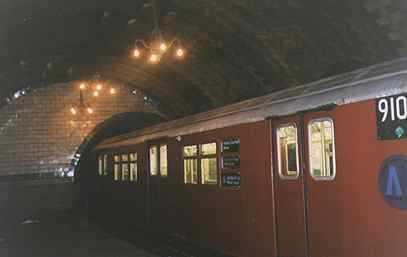 Having completed its downtown run, the #6 IRT local R-36 Redbird rumbles through City Hall on its way back to the uptown track. Note the arched ceilings and chandeliers.

2003: The Redbirds, like this station, have passed to history, though hope springs eternal for teh eventual opening of this station as a Transit Museum adjunct. 2004 Subway Centennial celebratiosn may also employ the station. 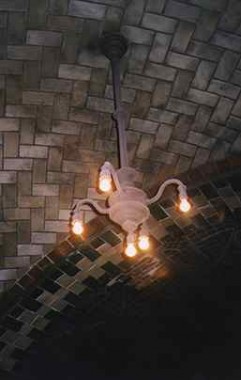 Elegant chandeliers supply light and are supplemented by vault lights of amethyst glass–which are still visible from City Hall Park, if you know where to look. 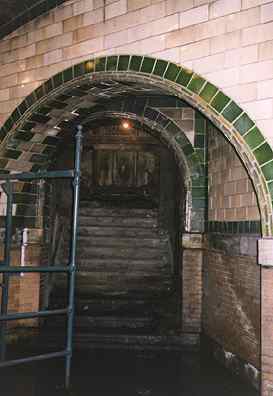 One of the two arched stairways that led from street level to the mezzanine, where tickets could be purchased. Tokens were never available at the City Hall station since it closed before tokens were adopted!