AN ISLAND JUST FOR U

Smack in the middle of the East River, near the UN Headquarters, is an artificial island built in the 1890s. U Thant Island was named for the Burmese secretary-general of the United Nations between 1961 and 1971. 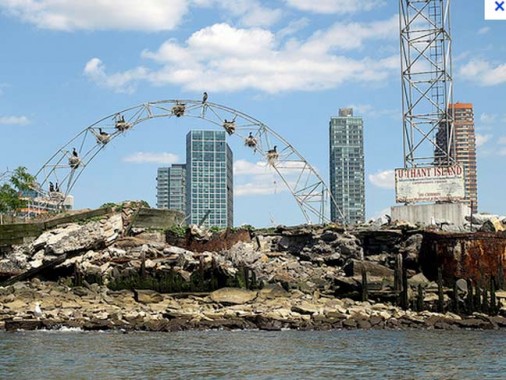 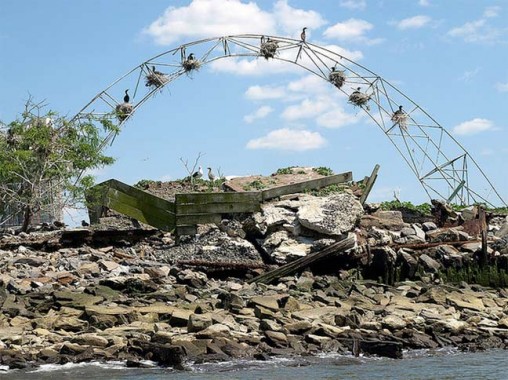 The island was built by subway pioneer August Belmont, who was completing the Steinway Tunnels under the East River. Piano manufacturer William Steinway had begun the tunnels in 1890, hoping to extend trolley service between Manhattan and Queens. Steinway died before the project could be finished, but Belmont stepped in. Belmont Island (as it was then called) was made up of landfill from the excavated tunnel.

For the next 70 years, Belmont Island was all but forgotten, but in 1976, United Nations employees who were followers of spiritual leader Sri Chinmoy rediscovered the forlorn island and redecorated it by planting trees and flowers. The island was renamed for U Thant, a good friend of Chinmoy. photos: Acravan, Flickriver 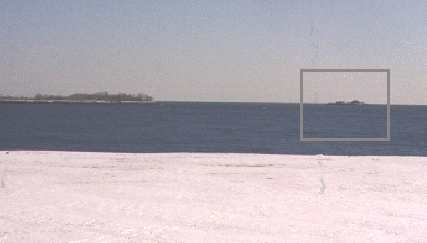 Two abandoned islands lie in the Atlantic Ocean off the southeast coast of Staten Island, rather like Phobos and Deimos, the minuscule Martian moons. Hoffman Island, the largest and closest is at left, while Swinburne, the smaller and more remote, is boxed in grey. Both were formed from landfill in the 1870s.

Hoffman was named for an 1860s NYC mayor, while Swinburne, originally named Dix Island, was renamed for hero Civil War surgeon Dr. John Swinburne. The islands were used to care for and quarantine immigrants who, after being pronounced to be without major disease, were sent on to Castle Garden and later Ellis Island for processing. This use continud till the 1920s. 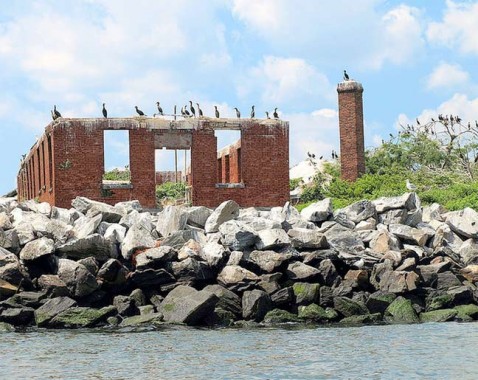 In the 1940s the Coast Guard used Hoffman as a training academy, while Swinburne was used as a control center for mines spread along the east coast to keep enemy subs at bay during World War II.

Uber-road czar Robert Moses and financier Bernard Baruch hatched a plan in the 1950s to turn the islands into a 250-acre park, but the idea never got off the ground.

That was the end of any activity for the islands, though. All remaining buildings were razed on Hoffman in the 1960s. Some crumbling remains are still on Swinburne and can be glimpsed with binoculars or by going past in a motorboat.

–Information from The Other Islands Of New York City, by Sharon Seitz and Stuart Miller, Countryman Press, 1996 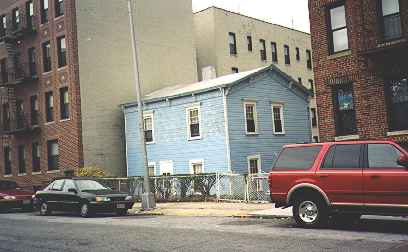 At one time, Bay Ridge, Brooklyn, was filled with wooden two-story houses like the one shown above, which is on Gelston Avenue just off 92nd Street. It’s quite likely that it dates from the 1800s and could have been a farmhouse at one point. The brick apartment buildings surrounding it date to the 1920s or 30s–the golden age of brick apartment building.

RIP: the farmhouse was demolished in 2002. 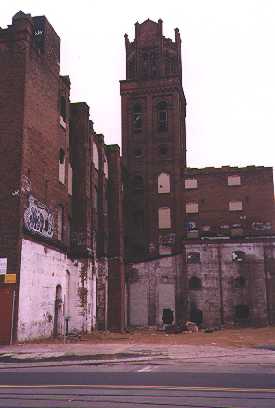 Is it an abandoned church, gutted by fire? The ruined home of an 1890s railroad baron perhaps? The Xanadu of a New York City Citizen Kane maybe? 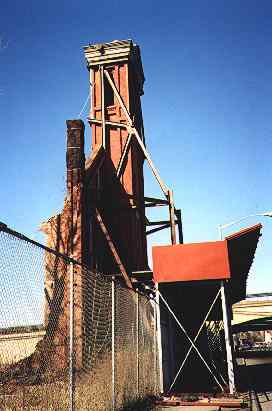 But if it’s abandoned churches gutted by fire you want, we’ve got ’em too. This is all that is left of St. Monica’s Roman Catholic Church in Jamaica, just south of the Long Island Railroad.

Built in 1857, it gradually lost its congregation in recent years and burned to the ground in 1996, leaving just its campanile (belltower). A day care center has since been built on the site, incoporating the belltower. 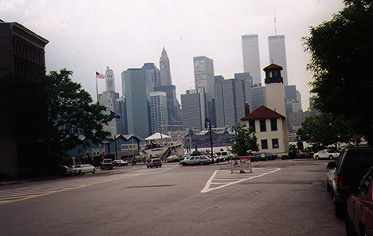 Forgotten Fan Al Trojanowicz, FDNY Supervising Dispatcher and maritime historian, has contributed some interesting information about the small building at the ferry landing.

The building is actually the former station of [fireboat] Engine Co. 77. In 1931 the company moved to this new (blt 1926 per AIA) station from Beekman Street, Manhattan. Ferries were no longer running. In 1959 fireboats were redesignated as Marine Companies, and Engine 77 became Marine 7. The FDNY closed this company (and house) in 1970. Later in the 1970s, the building was briefly occupied by the National Maritime Historical Society. Then it laid vacant many years.

Recently rebuilt by the City’s EDC, it is likely that its next life will be commercial. Rumor has it that both River Cafe and Bargemusic are interested in the property. Check out the newly restored pier also, neat (new) historical medallions at the SW corner. [2012: the building currently hosts an ice cream parlor] 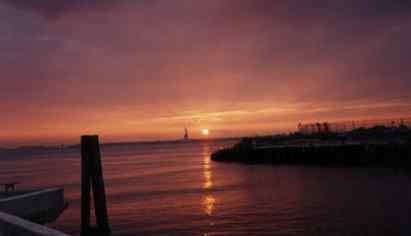 A fiery June sunset at the Statue Of Liberty can be seen from Louis Valentino Jr. Pier at the foot of Coffey Street in Red Hook, Brooklyn.

GREENWICH VILLAGE. Its back alleys and lanes