Flushing Airport, the former Queens private aircraft facility, hasn’t seen a landing or takeoff in many years. It’s not even in Flushing. Along with the Whitestone Expressway, it’s the chief reason for College Point’s isolation from the rest of Queens, because of its location south of 20th Avenue and west of the Whitestone Expressway. These days, it’s basically a huge expanse of weeds and rusted remains, surrounded by miles of chain link fence. I ventured into Flushing Airport in the summer of 1999 and found some rather strange things. Since then, other Forgotten Fans have ventured into, and over, the old airport and submitted some rather weird shots as well. 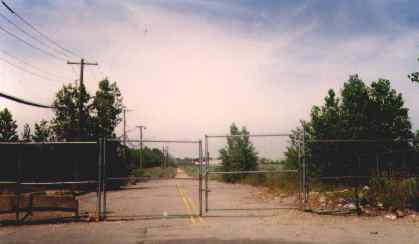 The roads that traversed Flushing Airport, Linden Place and 23rd avenue, are long closed and are being recaptured by weeds. 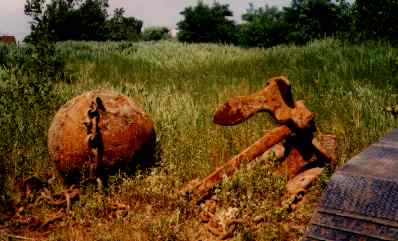 Heavy rusting equipment–what looks like a wrecking ball and an anchor–lie near a flatbed truck near the entrance. 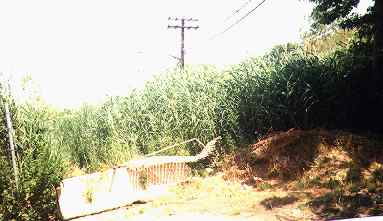 Flushing Airport shares a distinction with Flushing Avenue: neither are in Flushing.

Flushing Airport is accessible from this opening on 23rd Avenue near a bakery. Various detritus has been piled up at the “entrance” and weeds have grown eye high. 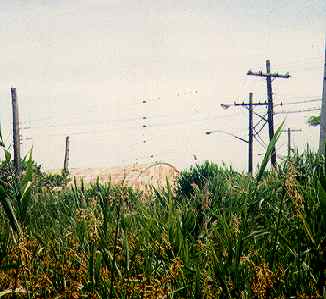 Nature is recapturing the area surrounding the two remaining Flushing Airport hangars near the former intersection of 23rd Avenue and Linden Place. 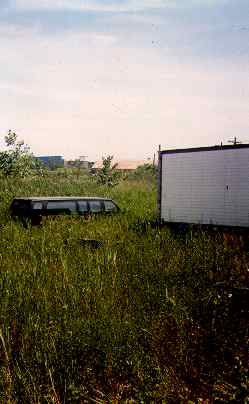 This will give you some idea how high the weeds have grown. The other remaining hangar can be seen in the background. 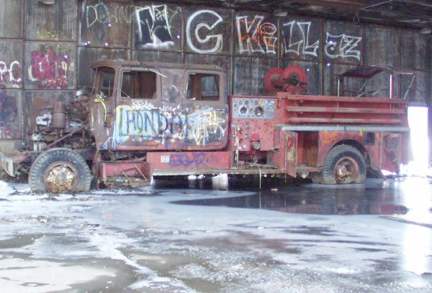 A look inside the hangar will reveal an ancient rusted fire engine. Photo: Andy Hoffer 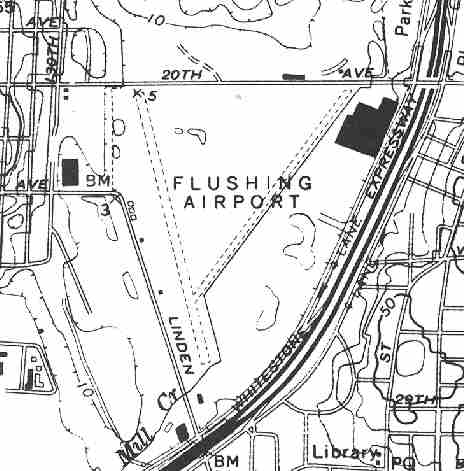 Peter Zaremba, writing in the April 22-29 Time Out New York, reports that Flushing Airport was opened in 1927 as Speed’s Airport (named for former owner Speed Hanzlik.) It became the busiest airport in New York City for a time. But, North Beach Airport opened in 1939 and, as LaGuardia Field, it quickly took business away from the older airfield. As the neighborhood around the airport was gradually built up, the airport became a liability. A fatal crash in the 1970s convinced locals that it should be closed, and it was in 1984. 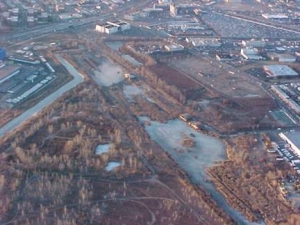 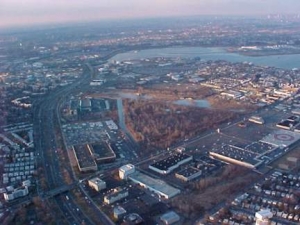 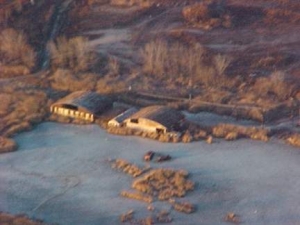 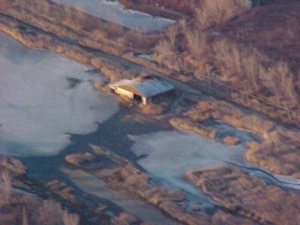 During its years of abandonment the old airport has become marshy and waterlogged; ice, seen here in this view looking northwest, has formed a thin film. Flushing Airport can be quite dangerous an area to explore in the winter, when snow often covers the deep puddles and swampy areas.

We are facing southwest with the Whitestone Expressway in the foreground and Flushing Bay in the back. 20th Avenue, which connects Whitestone and College Point, bisects the picture. In recent years, the area has become a mecca for ‘big box’ retailers; a few of them can be seen at the lower right.

The abandoned hangars, since demolished, can be seen from the air. 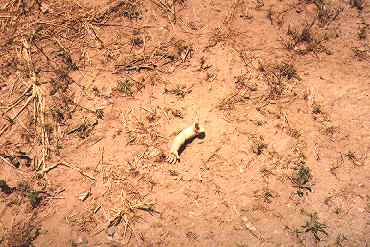 It’s hard to convey in words the stillness and the spookiness of the abandoned airport with its crumbling, rusted hangars and other equipment.

But this picture is worth a thousand words.

Thanks to Andy Hoffer and Chet Wilson for their assistance with this page.

BROOKLYN POURS IT ON

It’s all gone now…I think the remains of the old gas truck may still be there !!

I used to use this airport when I was in the area in the 60s.

I remember this airport. My dad used to take me to the adjoining Adventurers Inn amusement park. He’d always promised to get me a ride in one of the planes to shut me up.

I used to fly from Pgh to this airport to visit with my cousin, aunt and uncle in the late 60’s.
As I recall, it was not a bad GA airport to use my only problem was that VFR departures were prohibited from sunset to sunrise. Logbook 11/22/1968.

I lived in an apartment in Linden Towers in the 1960’s. I used to watch small aircraft fly over the building across the street on their final approach. It always seemed that they ramped down the engine over the building and glided in for a landing.

In 1973 I talked my sister into going for a ride in one of the planes to see what it was like. It was a short flight, but memorable because it was my first time.