Five Points, (the approximate location of which is circled in grey) which had long been wiped out by the time this 1946 map was published, would by all accounts put the West 42nd Street of the 1970s and 1980s to shame for its collection of thieves, brigands, prostitutes, murderers and fiends.

“The Deuce” had nothing on Five Points, which centered around a 1792 brewery on Cross Street near its intersection with Anthony and Orange Streets, at first known as Coulter’s Brewery, but by 1838 had become a rooming house known as the Old Brewery.

From Kenneth Dunshee’s 1952 account in As You Pass By:

The Old Brewery was a five-story building, old and dilapidated. Along one wall an alley led to a single large room in which more than seventy-five men and women of assorted nationalities and races lived together. This was the Den Of Thieves. The name was appropriate. Along the other wall ran another filthy lane called Murderer’s Alley worse than the first.

Upstairs there were about 75 other chambers, housing more than 1,000 people…men, women and children. The section was a warren, with underground passages and murderous cul-de-sacs, into which the police dared venture only in large numbers, for the Old Brewery for a period of more than fifteen years averaged a murder a night.

Five Points was too tough, too unlawful, too unsavory to last, even in the New York of a century ago. The Old Brewery was razed, the last of the gangs destroyed. Today it bears little resemblace to the bull-baiting, rip-roaring hell it was in 1850.

And from Charles Dickens in America: Notes For General Circulation (1842):

What place is this, to which the squalid street conducts us? A kind of square of leprous houses, some of which are attainable only by crazy wooden stairs without. What lies behind this tottering flight of steps? Let us go on again, and plunge into the Five Points. This is the place; these narrow ways diverging to the right and left, and reeking everywhere with dirt and filth. Such lives as are led here, bear the same fruit as elsewhere. The coarse and bloated faces at the doors have counterparts at home and all the world over. Debauchery has made the very houses prematurely old. See how the rotten beams are tumbling down, and how the patched and broken windows seem to scowl dimly, like eyes that have been hurt in drunken forays. Many of these pigs live here. Do they ever wonder why their masters walk upright instead of going on all fours, and why they talk instead of grunting?

By the 1920s, most of the vestiges of the old Five Points had been replaced by court houses, and by the 60s, high rise apartments had obliterated the last of its little wood frame and brick buildings. It’s a shame, though, that some of the buildings of this notorious slum couldn’t have been preserved in some way.

Notable: Worth’s tomb is at a traffic island at Fifth Avenue and 25th Street across from Madison Square.

Location: Chatham Street (Park Row) near Pearl Street north to Prince Street
What’s there now? Renamed Baxter Street, after Mexican War hero Lt. Col. Charles Baxter, ca. 1850. The city renamed it to disassociate it from the reputation it picked up in the Five Points era.

Today the section between Park Row and Worth Street is occupied by the U.S. Courthouse (1936) and New York County Courthouse (1926).

Location: From abt. Chambers and Elm Streets northeast to Mott Street near the Bowery
What’s there now? Renamed Park Street in the late 1800s. The city replaced the crowded tenements in the area partially due to the pleas of reformer Jacob Riis; the street was named for Columbus Park, which replaced the slums.

The notorious Old Brewery was located on Cross Street just southwest of Five Points at Anthony and Orange Streets.

Today, Park Street has been mostly wiped out, first by Columbus Park, the New York County Courthouse in 1926. The last remaining section, between Mulberry and Mott Streets, was renamed Mosco Street in the 1970s.

Notable: Little Water Street ended in a cul de sac known as Cow Bay (after a bay in the Collect Pond, which, with a group of tanneries and rendering plants, occupied this site before the Five Points slum appeared in the late 1830s). Cow Bay was ground zero for the most notorious tenements of Five Points, with dwellings known as Jacob’s Ladder, the Gates of Hell, and Brickbat Mansion. 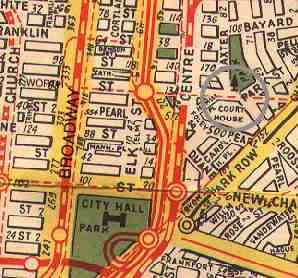 Leaving the ghosts of Five Points behind, lucky that we’ve survived to walk another day, we move over to the cluster of streets west of the Civic Center, where quite a few changes have been made since the mid-1800s.

Lafayette Street didn’t come into existence until the early 1900s, when its route was carved from the former Elm Street, Marion Street and Lafayette Place, and connected to Centre Street at the Municipal Building.

The city’s major prison in the 19th Century, the Tombs, was located on Elm Street.

In 1990, a long-forgotten African Burial Ground was found on a construction site at the present Elk (Elm) and Duane Streets. The ground has since been preserved and a monument is in the works. 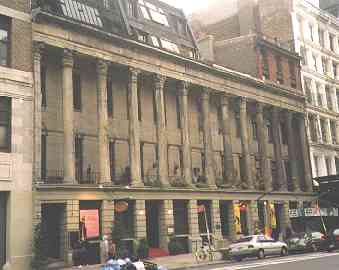 The landmarked Colonnade Row on today’s Lafayette Street was built in 1833 by architect Seth Geer and originally consisted of nine houses, of which only four remain today. When first built the houses were occupied by social bright lights of the era such as the Astors and Vanderbilts.

Location: Chambers Street north of City Hall north to Centre and Spring Streets
What’s there now? Renamed Elk Street in 1939 in honor of the Benevolent and Protective Order of Elks, New York Lodge #1, on the stretch between Chambers and Duane Streets.

North of Duane, its route was taken over by the new Lafayette Street in the early 1900s.

A probable explanation for the unusual name is that one of the city’s prime industries in the early 19th Century was distilling rum, of which sugar is a prime ingredient. The Rhinelander Sugar House, which stood at Rose and duane Streets from 1763-1892 was used by the British as a prison during the Revolutionary War.

This little alley is now working on its THIRD name. Originally Augustus Street, it was later called City Hall Place and in 1941 it was again renamed for Patrick Cardinal Hayes who had died in 1938.

Location: Great Jones Street north to Astor Place and East 8th Street
What’s there now? Originally a dead end on Astor Place that was home to John Jacob Astor and son William’s mansions, and the distinctive “Colonnade Row”, built in 1833.

It was later cut through to Centre Street near City Hall, assuming the path of Elm Street, in response to increased traffic after the Brooklyn Bridge was opened in 1883.

These two tiny alleys were gone by the mid-1970s. 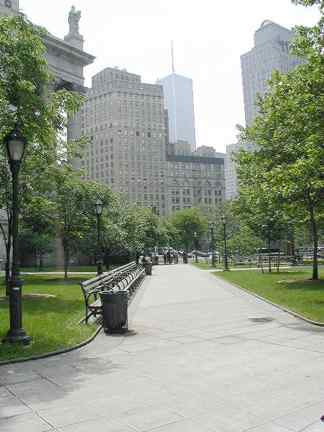 Location: from Centre Street north of Foley Square northeast to Worth Street.
What’s there now? A pedestrian walkway. When Foley Square was renovated in the 1990s, Hamill Place was demapped and subsequently obliterated.

Hamill Place was named for Pete Hamill.  Not the columnist, novelist and newspaperman, though. This Pete Hamill was a political leader who succeeded Thomas Foley (of Foley Square fame) as Tammany Hall boss. The alley was named Hamill Place in 1936. 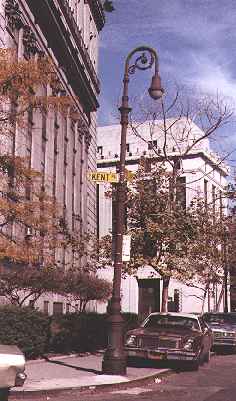 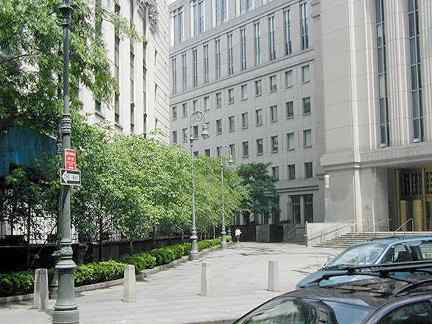 Location: from Pearl Street east of Foley Square northeast to Baxter Street.
What’s there now? When the U.S. Courthouse Annex was built in 1995, Kent Place was demapped. Like Hamill Place it too became a pedestrian walkway.

THE CORNER at 6th Avenue and 24th Street