THE CORNER at 6th Avenue and 24th Street 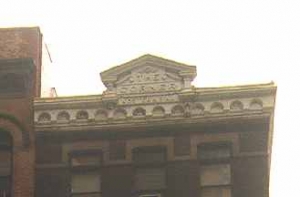 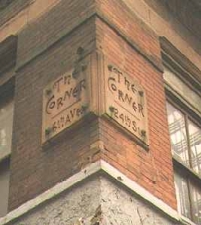 At first glance, the brick building at 6th Avenue and 24th Street doesn’t appear to be all that unusual, other than the presence of the longtime strip joint Billy’s Topless on the bottom floor.

But before going inside to ogle the girls, take a look at the two signs chiseled into the building on the corner, and also at the cornice on the top of the building.

In playful lettering, the building is identified as “The Corner” of Sixth Avenue and 24th Street.

“The Corner” is also plainly visible on the cornice at the top of the building.

So what’s going on?

I first noticed “The Corner” signs while biking past on a 5-borough bike tour in May 1999. I wondered about it, but then forgot about it. Later in the summer I picked up The Curious New Yorker, a book from the New York Times Press, and found an item explaining the whole thing.

While the building with “The Corner” signs is today the center of its own entertainment megalopolis, it is also the last remnant of a larger entertainment center in the Madison Square area. Here’s what the book says:

Built in 1879, it was called The Corner, and was the beer hall annex to Koster & Bial’s Vaudeville Theater/Concert Hall, where Victor Herbert conducted his forty-piece orchestra.

[In 1896 Koster & Bial closed] and entered into a brief partnership with Oscar Hammerstein II at his Thirty-Fourth Street Manhattan Opera House (on the present site of Macy’s).

The Curious New Yorker is erroneous in one thing…since Oscar Hammerstein was one year old in 1896, it was obviously his father who made the agreement with Koster & Bial.

6/1/01: Billy’s Topless itself has joined the ranks of the deceased. The only stripping going on at 6th and 24th now is workmen stripping the exterior of the building, as lower 6th Avenue continues a building and rehabilitation boom.