When is a subway not a subway?

When, of course, it’s an elevated.

The elevated used to be king in Manhattan. The sun never saw lengthy stretches of Pearl Street, Church Street, the Bowery, Greenwich Street, West Broadway, Columbus Avenue, First Avenue, Second Avenue, and Sixth, Eighth and Ninth Avenues, since they were hidden beneath elevated lines. In addition, it’s rarely mentioned today, but cross streets like 23rd, 34th, 53rd, and 110th also were under els for short stretches.

The oldest elevated line came to be known as the Ninth Avenue El, which began in 1867 and survived, in part, until 1958. While all trace of the Second, Third and Sixth Avenue Els have pretty much been eradicated since, except for the Third which met its Manhattan demise in 1955, the other els were torn down fairly early in the century. For a more detailed history of the Ninth Avenue, see nycsubway.org. 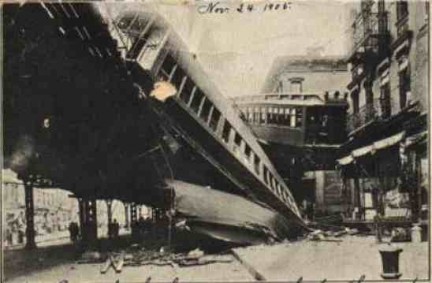 Forgotten Fan Peter Sefton sent me this picture of a train wreck somewhere on the 9th Avenue El in September 1905. The cars jumped the rail at the sharp curve at 53rd Street, the connector between the Sixth and Ninth Avenue Els. There have been other wrecks on NYC elevated trains since, but this was the worst. Twelve persons were killed and 42 were injured.

I’ve since been informed that this accident happened on September 11, 1905.

A short stretch of the Ninth, between 155th Street in Harlem and the IRT elevated over River Avenue in the Bronx, was allowed to remain as a shuttle until 1958 because of its convenience for baseball fans en route to the old Polo Grounds at 8th and 155th. But that, too, ended when the Giants left for San Francisco… 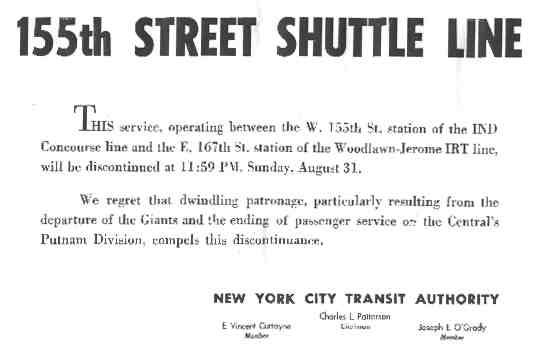 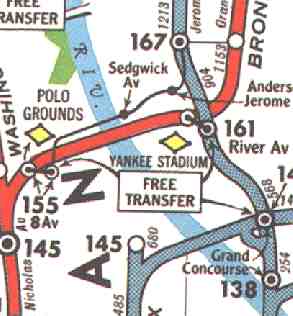 This Hagstrom subway map from 1956 shows the Polo Grounds Shuttle. Transfers were available from the IND at the 8th Avenue/155th Street station and at the 167th Street station on the IRT elevated at Jerome Avenue.

What’s interesting about the old Ninth Avenue el, and what set it apart from all other elevated lines in New York City, was that for about a four-block stretch in the High Bridge section of the Bronx, the elevated actually traveled through a tunnel, making it a de facto subway… although it wasn’t a part of the IRT, IND or BMT.

An expedition in January 2000 sponsored by Subtalk, the message board of nycsubway.org, the premier subway website, investigated the remnants of the Shuttle and discovered some interesting items… 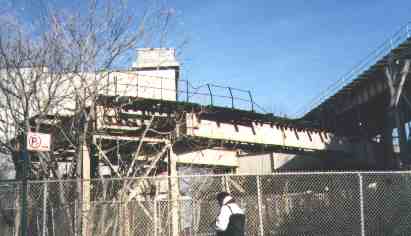 This is what remains of the Ninth Avenue Elevated as it connects to what is now the #4 train at River Avenue and E. 162nd Street just north of Yankee Stadium. 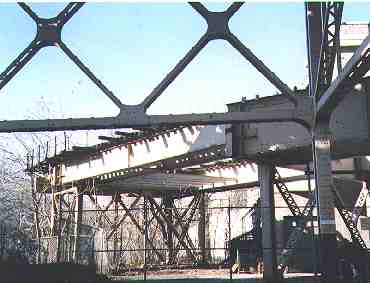 A second view of the spur. Some of the railing, roadbed and ties are still on the ancient section. 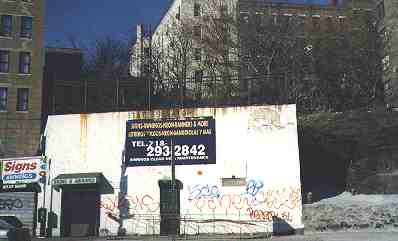 The first stop on the Shuttle on the way to the Polo Grounds from the Bronx was this station between Jerome and Anderson Avenues. These days, the wall that supported the platforms, as well as the concrete platforms themselves, are still there. The door at the bottom of the white wall originally led to the platforms while the elevated stretched across the street above it.

Unless you want to make a somewhat treacherous climb on the rocks to the right of the station, the only way to access the platforms these days is to walk through the tunnel from the Sedgwick Avenue platforms (see below). 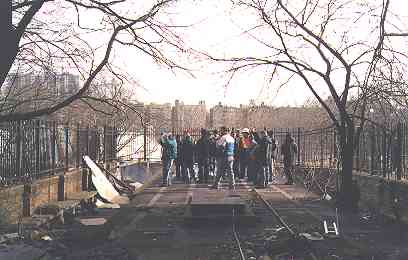 This is what remains of the old Anderson-Jerome platform. Garbage and old tires are strewn all over. 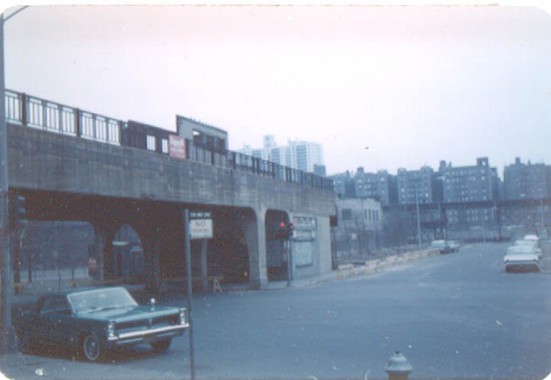 This view of the Anderson/Jerome station, from a different angle, was taken in 1966. The elevated section was torn down, leaving only the concrete wall underneath it. The IRT elevated is in the background. 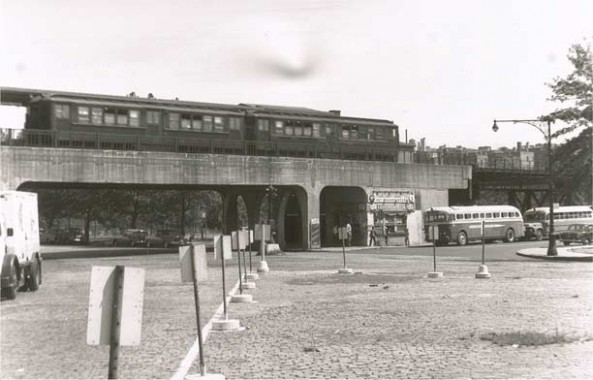 The other station on the shuttle in the Bronx was located on Sedgwick Avenue. This station is now nearly completely covered by the Major Deegan Expressway and its approach roads, but surprisingly, much of it still remains and is accessible, in a rather difficult fashion, by the public. 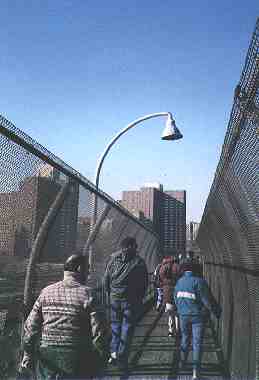 A catwalk over the Major Deegan Expressway at 161st Street leads to an abandoned park, which allows entrance to the old Sedgwick avenue platforms.

The lamppost over the walkway hasn’t worked in 50 years and the park on the other side has likely been abandoned for an equal amount of time.

The catwalk has not seen this amount of traffic in some time. 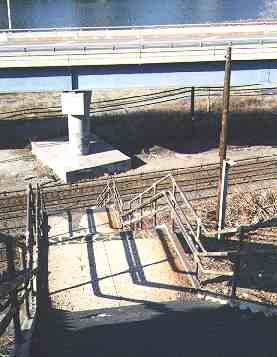 This stairway, now blocked by an iron gate, led to the former Sedgwick Avenue station on the old New York Central (now the Metro-North). No trace of that station remains today. The Harlem River is at the top of the picture. 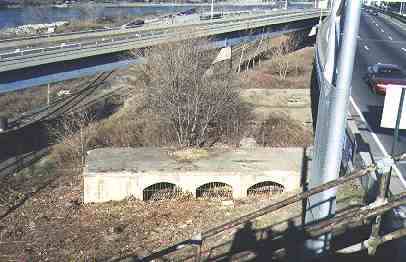 The skeleton of the old Sedgwick Avenue station is still in its old spot. A rarity among elevated stations, this is actually below ground, making it a “subway” station even though it was never on a subway line. The reason is that it starts at Coogan’s Bluff in Manhattan and winds up in a valley in the Bronx.

The tracks were in the grassy area between the platforms. In their heyday the platforms were covered with wooden slats and boasted elaborate metal railings, with blue and white enamel Sedgwick Avenue signs. The Sedgwick platform when it was open. We are looking east toward the tunnel. 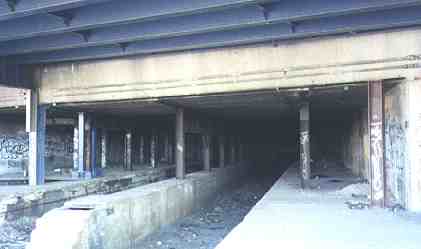 1999: We are now on the Sedgwick Avenue platform looking back through the tunnel toward the Jerome/Anderson platform. The blue overpass above is the Major Deegan Expressway.

Mark Feinman has posted pictures from the tunnel walk on the official nycsubway.org website. 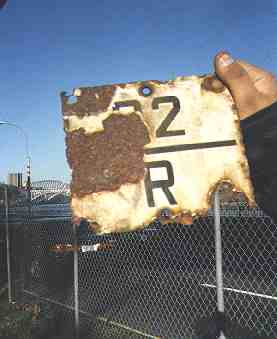 This signal plate was removed from the tunnel as a souvenir by our team leader Mark Wolodarsky.

Continuing along the abandoned park from the old Sedgwick Avenue station to Macombs dam Bridge, from which we would cross into Manhattan, we spotted a couple of interesting items along the way. 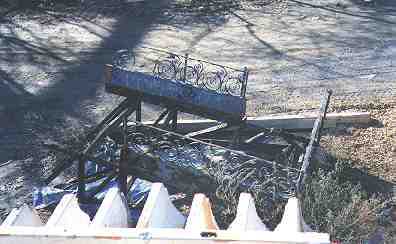 A bit of railing from the old 155th Street Viaduct was spotted in this Bronx construction area.

The 155th Street Viaduct is among the highest traffic bridges in Manhattan, towering 80 or so feet above the pavement. Anyone with vertigo should definitely not look over the fence toward the street. There used to be two connecting staircases to the Polo Grounds shuttle, and while most of the staircases were torched off and scrapped decades ago, a few ornate traces remain. These are the remains of the ancient staircases on the south (above) and north (at right) sidewalks of the 155th Street Viaduct. They don’t make ’em like this anymore, especially since they’re a nightmare to paint. The posts formerly held a canopy that shielded the stairway from rain. When the staircases were open to the public, if you wanted to kill yourself, this was your perfect place. It’s a LONG way down. This picture shows the stairway in the early 1990s, when it was still intact, albeit closed to pedestrians. Photo by Diana Stuart from The New York Chronicle, Spring 1998. Sorry about those moiré lines, folks. The viaduct preserves a longer stretch of ancient fence near the Harlem River Driveway. Subtalkers descend the only staircase that remains open to the Polo Grounds Houses. Not recommended in slippery or icy weather. Old hand lettered sign. Signs like these have pretty much been eliminated in favor of standard white on gray; this one has survived, along with the hospital, which is still there. Even on its newer signs, the MTA believes that the last stop on the IRT #4 is at Woodlawn Road, at the eponymous cemetery. Psst, MTA: it’s called Bainbridge Avenue, and has been for a few decades now. I have a map that does show Bainbridge Avenue as Woodlawn Road…but the map is from 1916. The John T. Brush Staircase near Edgecombe Park boasts a plaque presented by the New York (now San Francisco) Giants. [In 2011, restoration of the staircase was under way] This plaque in the Polo Grounds Houses marks the spot where home plate used to be. The Shot Heard Round The World was launched from here.