In the 1990s, the Long Island Rail Road made great strides in improving things for its customers…a brand new terminal in Penn Station, rebuilt and restored station houses, and brand new cars.

Few consider, though, that Brooklyn is a part of Long Island as well. Looking at the defunct Brooklyn branches of the LIRR shows them to be barely operational, and in the branch we’ll show you today, they’re downright vestigial. For want of a better name, a defunct LIRR branch in Ridgewood, Queens is called the Evergreen Branch. 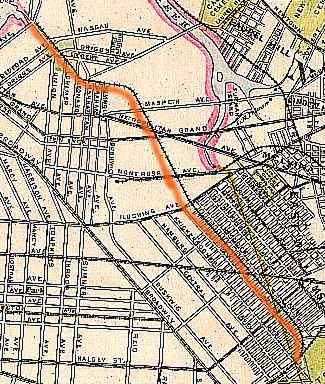 This 1873 Beers Atlas map shows the Evergreen in its heyday. In this era it actually served as a passenger line for a few years and at its greatest extent, it ran from the waterfront in Greenpoint and extended through Ridgewood until it connected with what is now the Bay Ridge Branch. In its salad days, the line saw steam locomotives like the one shown on the background of this page.

A later map shows an ‘old railroad grade’ and an Old Railroad Grade Alley. In point of fact, there’s really no alley to be found in this location…though tantalizing remains of the former railroad certainly can.

[Online maps have certainly improved since this 1999 number!]

Sometime in the early years of the 20th century, the old line was cut back to a junction with the Bushwick Branch near Flushing Avenue. From there, the Evergreen ran in a cut between Wyckoff and Irving Avenues to its eventaul merge with the Bay Ridge Branch at Cooper Avenue. For most of its life the line was used for localized freight deliveries to the various businesses that dotted its route. Gradually, those businesses disappeared, and the need for the railroad branch died too.

But the ghosts are still there. 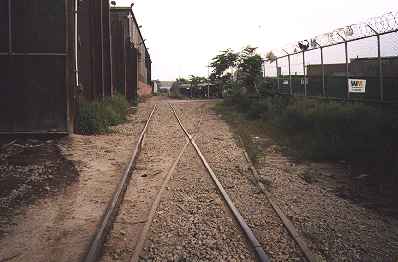 This picture shows the Evergreen Branch, upper right, at its junction with the Bushwick Branch just west of Varick Avenue. 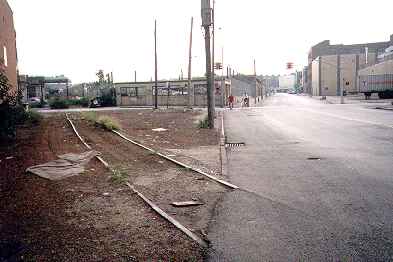 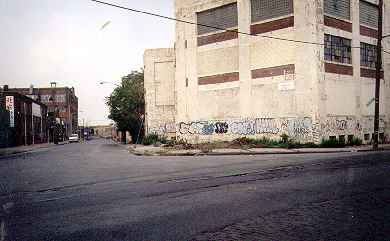 The only tracks in this picture are the old Flushing Avenue trolley tracks, but the cut in the building at Stewart Avenue indicated the railroad’s right of way. 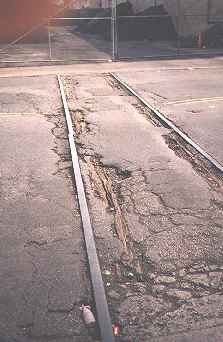 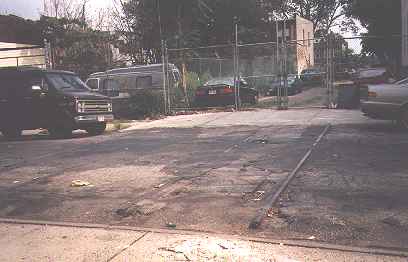 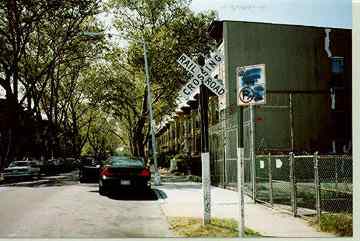 An amusing anomaly took place at Hancock Street, where a railroad crossing sign warned motorists about trains which would never come again. Unlike parallel streets, there were no former tracks poking up through the concrete here. 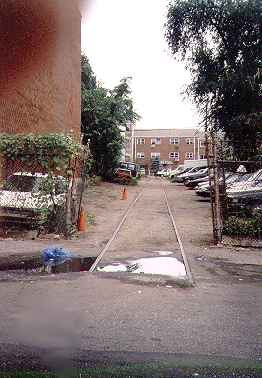 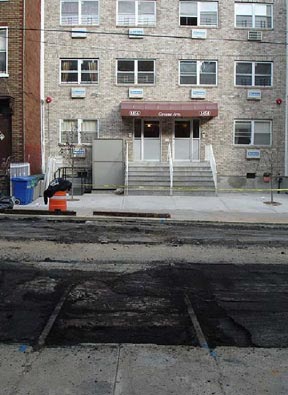 The northern section of the Evergreen, north of Myrtle Avenue, apparently disappeared sooner than its southern section did. However, these tracks, which cross Greene Avenue, have been preserved by a parking lot…

…as we see here in the same location in 2005, after some architecto-junk has been erected on the site. 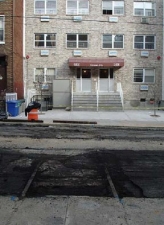 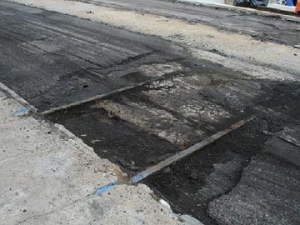 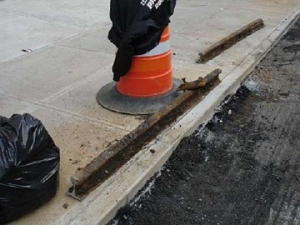 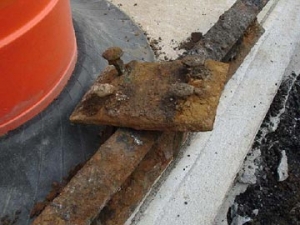 Forgotten Fan Patrick Cullinan Jr. reports that on April 29, 2005 road crews stripped off the pavement on Greene Avenue in preparation for resurfacing and pulled up the Evergreen LIRR tracks. Pat kept a spike as a souvenir. 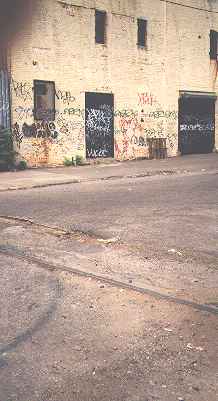 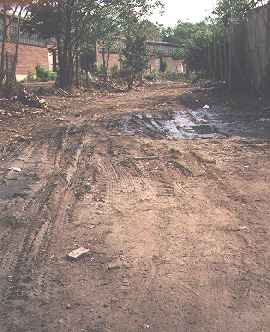 The right of way at Cooper Avenue. This is where the Evergreen joined the Bay Ridge Branch.

2011: More on the Evergreen Branch, including a video of the route, on Bushwick BK

The factory my Grandfather worked at was located next to the tracks and used the freight line for both supplies in and products out.

Reply
Remnants of the Evergreen LIRR Branch in Ridgewood | Brownstoner Queens June 7, 2013 - 10:00 am

Here is a link to a YouTube video of The Evergreen Line, a song I wrote about the Evergreen Branch of the LIRR: http://youtu.be/Axu-Z629zBA. The performance took place at the Peoples’ Voice Cafe / Community Church of New York in Manhattan on November 23, 2013.

Having been named after the powerful line, the evergreen, I am reminded of the pasture northeast about 100 miles, with cows and lamb, and a 3 legged goat to be explained later.

Worked putting freight cars down the cut. There was a lumber yard called tulnoy that also has a yard on Webster ave in the bronx also a beer distrubutor. Ralph Strobel Conrail engineer

I use to live on Irving Avenue and Starr Street in the late 60s and early 70s. I saw the tracks all over the place and wondered how long ago were they used.