Back in June 1999, I entered the grounds of the old Flushing Airport, and got as far as the mud, the ticks, the mosquitoes, and the head-high weeds and reeds would allow, and scraped the merest surface of what still lurks in the abandoned facility.

Now, Forgotten Fan Andy Hoffer has gone me one better and gone much further than I ever dared go. There’s all kinds of things lurking in Flushing Airport that haven’t been touched since the 1940s and possibly earlier. Andy endured some moments of uncomfortability (partially broke through the ice and spent the rest of the day pretty wet) but shot a few dozen terrific pictures, some of which we’ll present here.

CAUTION: unauthorized entry here is trespassing. Cooperate with the authorities. 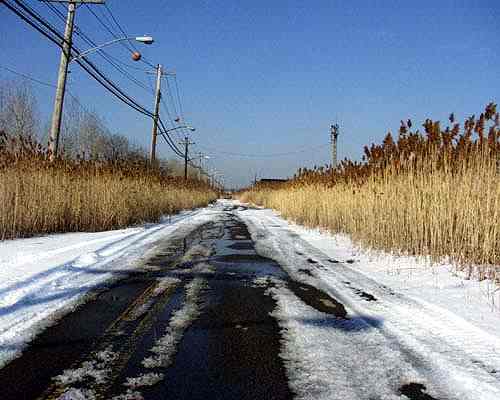 For years Linden Place was the main road leading into Flushing Airport. These days it hides its secrets behind a locked gate.

Note the round objects on the high tension wires, as well as the tower on the right side of the road. 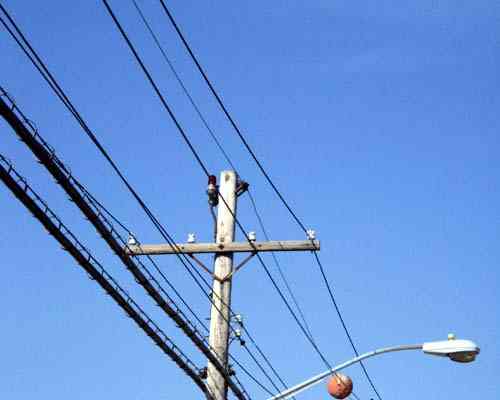 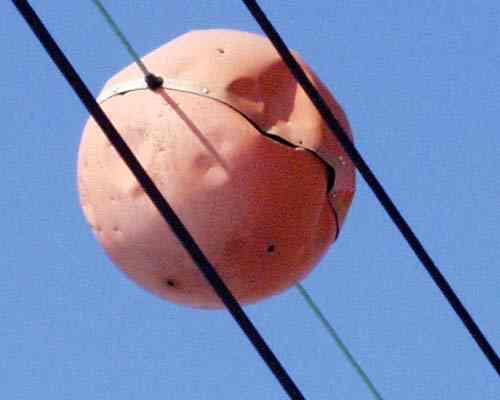 Metal spheres were placed on the wires, as far as I know, to help keep any incoming small aircraft away. Obviously this method would be of help only during the day.

It should be noted that these wires are still very much active. 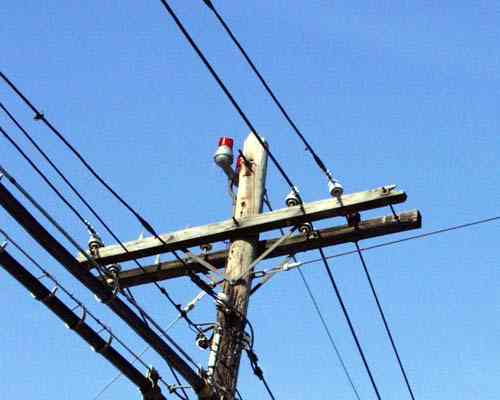 Red lights placed atop some of the telephone poles may also have served to warn aircraft away from the wires. 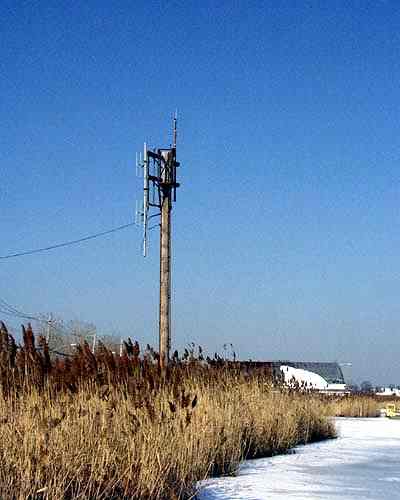 Towers on Linden Place near the hangars. Forgotten Fan Charles Gallo reports that these are transmitters for Microburst weather radar, part of the weather radar system for La Guardia Airport. 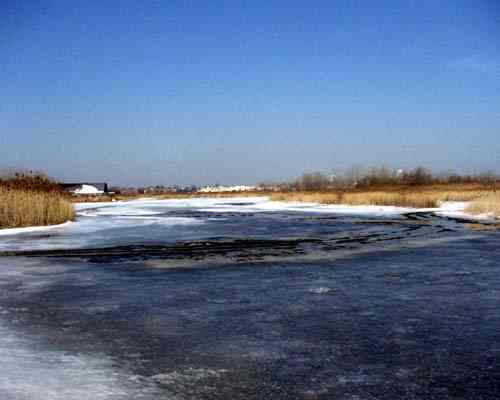 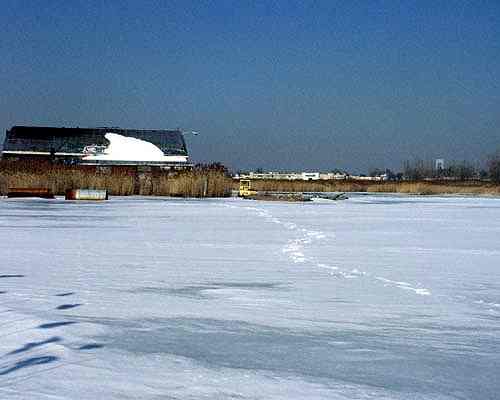 We are looking generally north from one of Flushing Airport’s two runways close by the two remaining hangars. The Whitestone Bridge is at right, and photographer Andy Hoffer’s footprints are in the foreground. The old runway is filled with snowfall and rainwater. 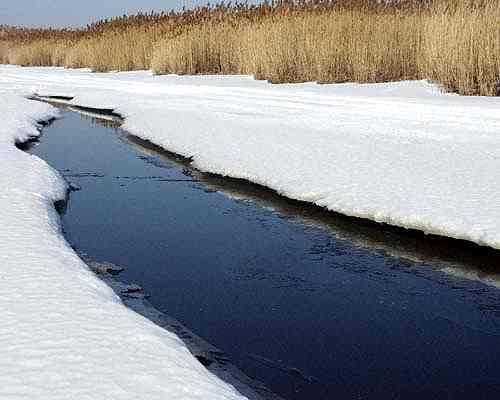 One of the streams, Mill Creek, that winds its way through Flushing Airport. 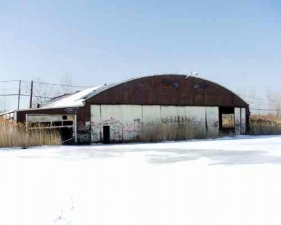 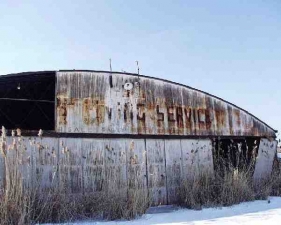 Flushing Airport had two remaining hangars, of varying decrepitude, that are still standing at Linden Place and 23rd Avenue. Only gravity and inertia kept these buildings standing, apparently. 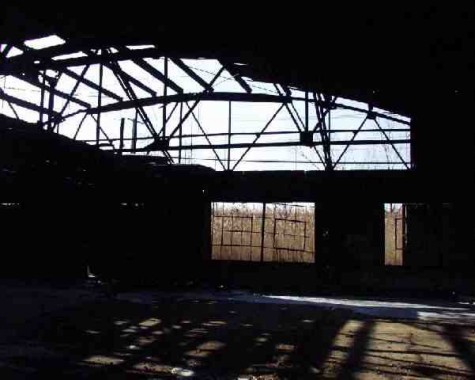 Most of the roof and much of the walls have gone in this hangar. The window glass was knocked out decades ago. 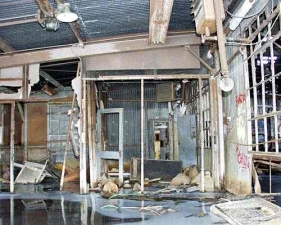 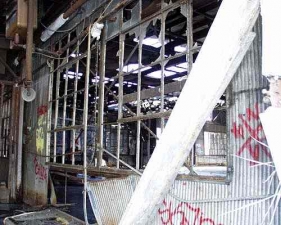 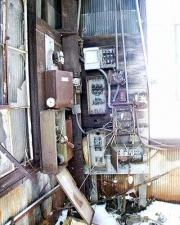 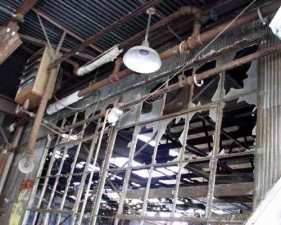 Some views from inside one of the hangars. 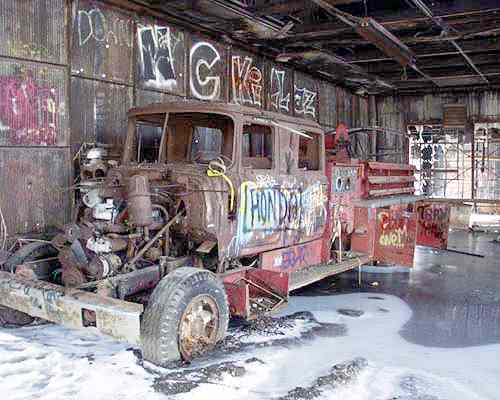 Long-abandoned fire engine inside the hangar. This shack is between the two hangars. I have been told it used to be a snack bar. An abandoned tanker outside the hangar. Note the depth of the thin ice at this point. I’m kind of reminded of the scene in Alien where they find the wrcked alien space ship, complete with dead alien. No deceased trucker here though. 23rd Avenue, the thoroughfare that connects Flushing Airport with College Point, is seen in these photographs. 23rd Avenue is covered with reeds and weeds with only a slight clearing to navigate through. Was College Point ever a German stronghold? The Steuben Society of America, founded 1919, is nearby.

The round orange ball is a captured UFO. It still supplies power to the surrounding communities.

Yes, the red lights atop the poles, & the large balls on the electrical wires were to alert pilots to the presence of the wires & poles. Back when I was 11 or 12, my best friend & I would bike to Flushing Airport to watch planes land & take off.

What definitely outclassed everything else, however, was being lucky enough to be there when the Goodyear Blimp was about to take off. The mooring lines were cast off, & the pilot would rev the engines just a bit to get the blimp moving forward, He then raised the nose up until the entire blimp was practically standing on its tail, at an angle of around 45-50 degrees from the ground.

The pilot would then open the throttle for the engines, there was a tremendous, steady roar you could feel in your midsection, the rear-facing propellers would be a practically invisible blur, & that thing would rise into the air with increasing speed until it was at its traveling altitude. It was quite a sight, & one that contrasted strongly with the usual peaceful image of the blimp cruising at altitude.

Another part of my boyhood gone; Speed’s Flying Service (the formerly visible full name on the rusted hangar sign) is no more, but the memories live on.

I have a pal from College Point who has various photos of flushing airport during the 1930’s and 1940’s have you any interest in posting them ?

i learned to fly at flushing, have vivid memories of speed hanzlik and of the j-3s, standing on their noses in the hangar. any chance your friend would want to email to me a few of his photos? i have a little powerpoint presentation about some of the airports from long island’s past, but there aren’t many pix of the very early years of flushing airport.

Hi, Joe Curto! Although I am not the owner of this site, I am researching the history of Flushing Airport as my grandfather, Archie Smith, learned to fly there back in the early 1930s. Unfortunately, I have no photos of this time in his life and while do not expect that your friend would have pictures of my grandfather, I would love to see whatever photos he has for the Airport from that time period. If you feel comfortable doing so, you can forward any such photos to me at colindavid1973@yahoo.com. If not, no worries 😉

Thanks to the creator of this website for the pictures and narrative of your visit(s) to the old Flushing Airport. I think I will be making a trip there soon. Have a happy New Year, everyone!

Mort Arken, the owner of the Skytypers seemed to have taken over some of the airport operations in the mid to late 1970’s. I had had some business with him during this time. Using WWII torpedo bombers with a smoke reservoir, which they could fill with different types of smoke. Originally they would use a manual release for the dots, they graduating to Hoelring(punch) cards, and now finally to computers to generate the “typed” words in the sky. They used to park the planes near their hangers with the wings folded, it sort of looked like a WWII movie of an airstrip in the Pacific.

During the time we lived across the street, there were numerous plane crashes including the one that killed Judge Rowe and his family, and the civil air patrol crash that killed 6 cadets when in crashed into the roof of a local home on 28th Avenue and 146th Street . Most of the plane problems occurred because the local no-good-nicks used to siphon the aviation gas out of the planes for their race cars,

Had my first few initial/official hours @ Speed’s in a J-3 back in the early/mid 60’s. Speed couldn’t stop fighting with the instructors (and rest of the world!:) from time to time so I moved over to the more organized peace & quiet of Joe West’s LaGuardia Flying Service and the newer, more ‘sophisticated’ Cherokee 140.

You don’t remember me, Joe Curto. But I remember you, Walter Press, etc. Best regards! 🙂

Hi, Joe Curto! You don’t remember but I remember you …. best regards. 🙂

Where I learned to fly and my FIRST SOLO in 1946! Mitch, another bit of history, scenes from the movie “Blaze of Noon” were filmed here. When skytyping replaced sky writing, the first skytypers were WWII surplus SNJ’s the Navy version of the Army Air Corps’ AT-6, advanced trainer.