New York City used to be an el town. Beginning in the 1870s on Ninth Avenue in Manhattan, dozens of elevated lines rose and swift travel over traffic-clogged streets became a reality. Whole neighborhoods came into being as former farmland was converted for business and residential purposes at the coming of elevated trains.

But in October 1904, the beginning of the end of the els was in sight. The very first subway line, that ran from City Hall to the upper west side, was open and people began to see the dark, forbidding and occasionally dangerous streets that ran under els in different ways. One by one, Manhattan’s great els came to be seen as redundant as more and more subway lines were built. The city’s last great subway project, the IND, was started in the 1920s and mostly finished by 1940, and when it was, the els had already begun to fall. The Second, Ninth, Sixth and finally, the Third Avenue els were gone by 1955. In the case of the Second and Third Avenue els, there were not even any new IND subway lines to replace them and the passenger crunch on the IRT Lexington Avenue subway continues to this day with no relief in sight.

In the Bronx, Brooklyn and Queens, els fared somewhat better and continued to be built until about 1920. In Brooklyn and Queens they replaced surface railroads and eliminated dangerous grade crossings. In southern Brooklyn, els (and embankments, in the case of the Brighton Line) are still the primary mode of rail transit, since only the Fourth Avenue BMT, built as a pure subway and finished in 1916, penetrates to Brooklyn’s southern fringe.

Yet, there are still many elevated lines in Brooklyn and Queens that have vanished…but not without traces. On this page, we’ll see signs of where some former lines used to be. 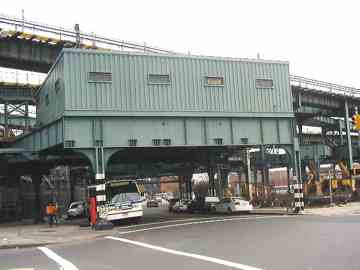 Fulton Street, named for steamboat inventor Robert Fulton, is one of the longest streets in Brooklyn, extending from the East River to the (former) City Line.

It also used to be home to two separate elevated lines, of which only one remains. The vanished one was built in the 1880s and extended from Fulton Ferry to Richmond Hill, Queens. (The other is the current J line which runs on Fulton Street from Broadway to Crescent Street).

When both els were operating on Fulton Street, only a one-block section of it in Brownsville and a six-block section near City Line were open to sunlight. 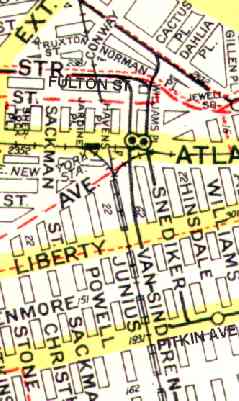 The map above shows where the Fulton Street El turned south along Van Sinderen and Snediker Avenue and then east along Pitkin Avenue. The line extended along Liberty Avenue in Queens east to Richmond Hill. The above picture shows a stub of the Fulton Street el in the East New York el complex at Van Sinderen Avenue. 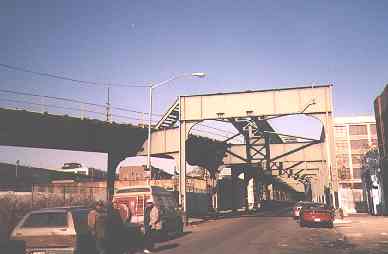 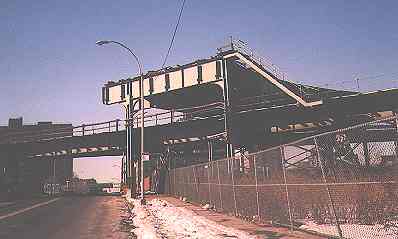 Here the old Fulton Street line flies over the Canarsie Line at Pitkin Avenue (foreground) and Snediker Avenue. The line continued east along Pitkin and then to Richmond Hill along Liberty Avenue.

The IND 8th Avenue line employs the el trackage along Liberty Avenue till the end of the A line at Lefferts Boulevard.

Another section of the old Fulton El survived till the mid-1990s, when it was razed during renovations of the Franklin Avenue Shuttle.

This trestle is scheduled to be demolished as part of the simplification of the Atlantic Avenue el complex. Canarsie Line service will then run over Van Sinderen Avenue both north and southbound. It contains ironwork from the original Kings County Railroad. 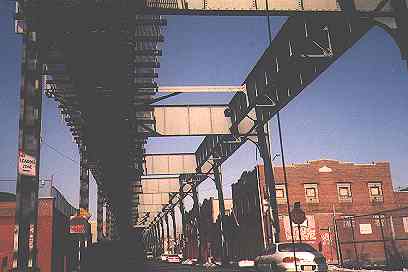 November 2003: demolition of this section is mostly complete.

The Myrtle Avenue Line ran from Manhattan to Middle Village, Queens, running over the Brooklyn Bridge, down Adams Street, east on Myrtle Avenue and coming to an end at Metropolitan Avenue at Lutheran Cemetery.

The Myrtle survived until relatively recent times; the section from Jay Street to Metropolitan Avenue hung in there until October 1969 and by then was the only mass transit line in NYC still using wooden cars. Since the Myrtle never went underground it could do this (no wooden cars were allowed in tunnels). 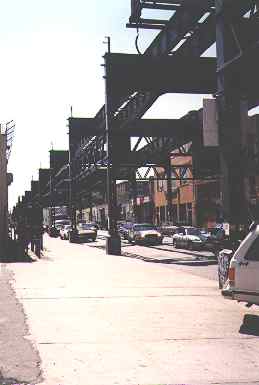 Most of the Myrtle west of Broadway was demolished soon after its closing in 1969, but this short section between Lewis Avenue and Broadway was left standing, apparently to retain structural integrity of the Broadway el and the remaining section of the Myrtle Avenue el extending east from Broadway to Metropolitan Avenue.

Though the wooden cars never carried the marking, the Myrtle Avenue el was briefly designated the MJ line a couple of years before it closed. 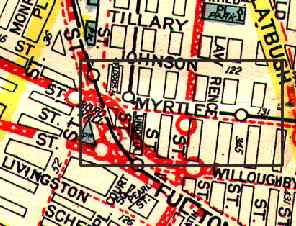 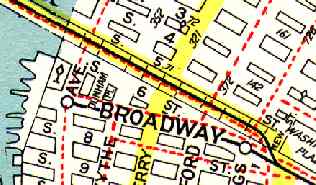 Two sections of this el have been eliminated. The first, a spur along Broadway from Marcy Avenue west to Broadway Ferry at Kent Avenue, eliminated passenger service in 1916 but the trestle was allowed to stand until 1940. It had stops at Driggs Avenue and Broadway Ferry. (The ferry, of course, is also long gone). 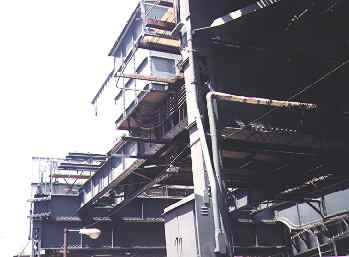 A small section of the old Broadway Ferry spur can still be seen west of the Marcy Avenue station. The entire spur was demolished in 1940, opening a four-block section of Broadway to the sun, the only part of Broadway that can claim sunshine.

The second section to be eliminated made it all the way to 1978. The el originally extended to 168th Street, but the IND along Hillside Avenue ultimately made that section expendable. In the first new construction in decades, the MTA dipped the line underground, built three new stations and ran the line to Parsons Blvd./Archer Avenue and chipped in a transfer to the IND E, which was also extended as a spur from the Hillside Avenue line. That section opened in 1988. 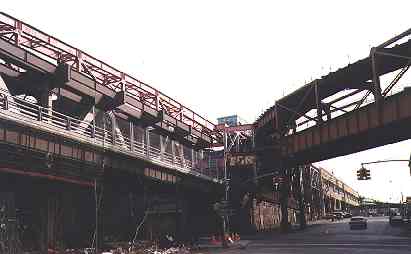 The Second Avenue el extended north from Chatham Square (where it joined the Third Avenue el) north along 1st Avenue, 23rd street and 2nd Avenue to upper Manhattan. A spur connected it with the Flushing Line across the Queensboro Bridge.

The Second Avenue Line closed in sections; the last part, from Chatham Square north to the Queensboro and east across the bridge, closed in 1942.

However, a short section of the spur (seen above) extends over the roadway of the bridge. 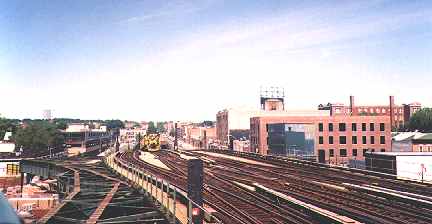 The Culver Line branched from the West End line at 9th Avenue in Borough Park, Brooklyn, and continued in a right-of-way south of 37th Street and then along McDonald Avenue, joining other lines in Coney Island. The first part of the new elevated opened March 16, 1919 and the service reached the new Coney Island terminal May 1, 1920.

When the 6th Avenue IND was connected to the el in 1954 with new construction, the Culver between 9th Avenue and Ditmas Avenue was orphaned.

The MTA made the remaining Culver section a shuttle line between 9th Avenue and Ditmas, with stops at Fort Hamilton Parkway and 13th Avenue. 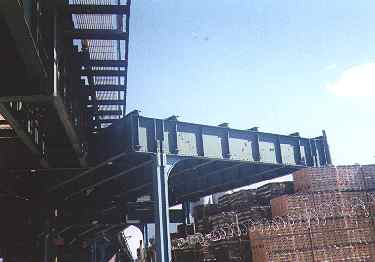 Business fell off, however, and the shuttle was closed in 1975. The structure remained in place until 1985, when it too was demolished. A very short section of the spur is still in place at Cortelyou Road and McDonald Avenue.

Additional information about the Culver Shuttle can be found at Paul Matus’ excellent website Third Rail at rapidtransit.net.com.

For photos of the Culver el in operation check out Jeff Saltzman’s photos.

THE LONG ISLAND RAIL ROAD and the JAMAICA EL 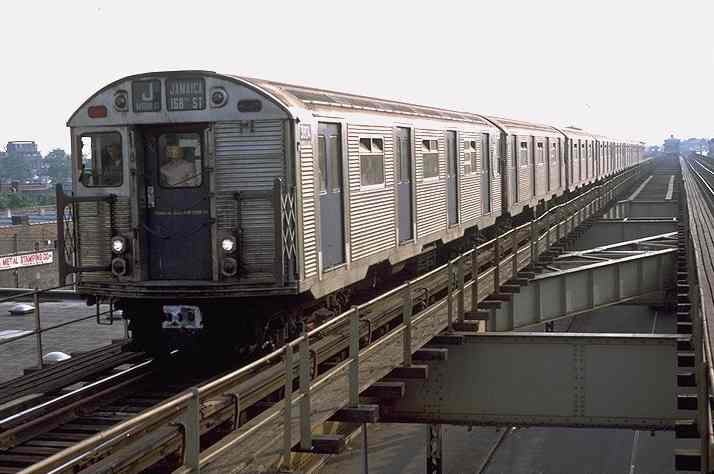 Believe it or not, the Long Island Rail Road ran passenger service along a Brooklyn el, across the Williamsburg Bridge and south to Chambers Street. The LIRR spurred north from its grade at Atlantic Avenue, and rose to join today’s J line at Fulton Street near Crescent Street.

Ultimately, the experiment wasn’t successful and LIRR service to Manhattan at Chambers Street ended in 1916. However, some of the connecting trestle at Fulton Street remains, and is represented by the diagonal piece in the picture above.