HITCH A RIDE TO ROCKAWAY BEACH to see the alleys

It’s a long way out there, at the end of the A Train on the Rockaway Peninsula, though its thousands of residents would differ with you about that. To them it’s just as much a New York City community as Tribeca, Fordham, Flatbush or Port Richmond.

The Rockaway Peninsula was first settled by the namesake Indians, then the Dutch, then the English. It became a playground for the rich at first, accessible only by private yacht, but by the late 1800s it became more accessible by steamship and rail, eventually rivaling Coney Island as NYC’s favorite summer resort. William Wainwright built Rockaway Playland in 1901; it lasted until 1985, and Remington Vernam purchased land in 1882, hoping to turn it into a resort. Evetually his holdings became known as Arverne. Acres and acres of bungalows sprouted along Far Rockaway’s south shore. In the 1970s and 1980s, they were demolished, leaving acres and acres of nothingness on what ought to be one of NYC’s chief shoreside attractions.

Rockaway has its share of unnoticed alleys and dead ends, many from its bungalow days. You won’t find the odd cobblestoned lane with maybe a hidden castiron wall lamp here. You’ll find empty lots, weeds and occasionally tough neighborhoods. Shall we proceed?

Tucked alongside the concrete IND subway trestle at Beach Channel Drive and Beach 84th Street, Java Place may have watery connotations, as does Java Street in Brooklyn’s Greenpoint. In a previous era, cargo ships from points far and wide docked in Greenpoint. It’s a stretch, though. 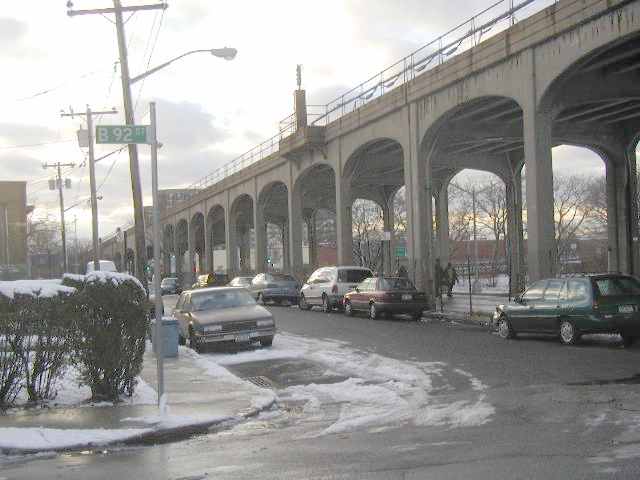 At first I thought DeSota Road, at Rockaway Freeway and Beach 92nd Street, may be associated with the classic car or the European discoverer of the Mississippi River–but that’s DeSoto. DeSota may have been a guy from the neighborhood.

DeSota is one of a number of alleyways that parallel the concrete IND subway trestle that runs most of the length of the peninsula. Train service to the Rockaways has existed since the late 1800s and was run by the Long Island Railroad until 1953, when fires destroyed the wooden causeway that supported the roadbed in Jamaica Bay. The Transit Authority purchased the right of way and constructed a new bridge, and subway trains took over the line in 1956, with terminals at Mott Avenue on the east and Rockaway Park in the west. The tracks were severed from the LIRR’s new Far Rockaway terminus in 1958.

The line operated at grade until the early 1940s, when the present concrete trestle was built, with a new roadway, Rockaway Freeway, laid out underneath it.

DeSota Road’s partner of sorts along the Freeway is Gull Court. It accepts traffic from Beach 88th and 89th Street, leaving the Freeway relatively uninterrupted.

Some ghost streets clank their chains in Rockaway. On maps Finnard Avenue is shown between Beach 80th and 82nd Streets north of Beach Channel Drive and the Hammels Houses; these days though, Finnard is nothing but a slightly less dense clump of weeds marked by a long-ago burnt out telephone pole lamp.

Barbadoes Drive is, or was, named for Barbadoes Basin, which juts into the peninsula from Jamaica Bay just east of the IND subway bridge. According to the maps, it’s supposed to originate at Beach Channel Drive and Beach 87th Street and continue along the Jamaica Bay coastline, with some interruptions, but here, at Beach Channel Drive, its only sign is a muddy driveway adjacent to the “Flats Fixed” place. The bay must have some connection with the Caribbean county, but I have no idea what the “e” is doing in the name.

Once, Rockaway was full of bungalows along its south shore, but they’re mostly gone now, but the streets that serviced them, like Larkin Avenue and this, Seafoam Court, are still there. Even Seafoam Court is now an empty lot, but the Department of Transportation still marks its ghost with a green and white.

Partners in haunting, Swan and Story Roads, between Beach 68th and 69th Streets north of the boardwalk, seem even more forbidding, and more unnecessary, in these winter shots. the two once served as conduits for traffic produced from now-razed bungalows. Swan and Story now await whatever development will come to this part of the peninsula, if development ever comes.

THE ALLEYS OF FAR ROCKAWAY

It’s not that far, really. Only in relative distance from Manhattan. Far Rockaway first claimed fame in 1833 for its Marine Pavilion, which attracted the likes of Henry Wadsworth Longfellow and Washington Irving and other city dwellers fleeing a cholera outbreak. Many more resorts arrived when the LIRR was extended out to Far Rockaway in 1872. Far Rockaway was originally part of the town of Hempstead, but joined Queens, which remained with NYC after its three easternmost towns became a new county, Nassau, in 1898. Far Rockaway, unsatisfied with city services, attempted to secede in 1915 and 1917. Today, as far as its street layout is concerned, Far Rockaway has little in common with its gridironed brothers in the five boroughs, and more resembles Nassau County to the east and north and Staten Island with meandering streets and plenty of dead ends.

The Ostend Hotel and Casino was one of dozens of seaside resorts and hotels in the Rockaways in the early part of the 20th Century. It stood at the foot of the present Brach 14th Street from 1908 to 1941 when it was destroyed by fire. This dead-end street seems to be the only reminder of it left.

Perhaps some original Far Rockawayers were Belgian? Ostend is a Belgian seaport on the North Sea, midway between the Belgian borders with France and Holland.

Balsam Court dead-ends at a synagogue on Sage Street just north of Empire Avenue, one of the main routes from Far Rockaway into Lawrence, the nearest of Nassau County’s Five Towns. I’m reminded of Bronxite Martin Balsam, who played Carroll O’Connor’s truculent partner in Archie Bunker’s Place and one of Robert Shaw’s gang in “The Taking of Pelham 1-2-3.”

Sage Street is named for railroad tycoon and philanthropist Russell Sage, who summered in the Rockaways. After his death his wife funded the Sage Memorial Church on Beach 12th Street, which features a 25×21′ window designed by Louis Tiffany.

Beatrice and Ives Courts are a couple of pleasant-looking dead ends to be found on Dickens Street north of Cornaga Avenue as you drive toward the community of Bayswater.

Watjean Court is one of the many oddly-named streets in Far Rockaway, in an area formerly called Wavecrest, just north of Seagirt Boulevard…which itself is a strange sounding name (“girt” in Old English means ‘surrounded by’ and has the same root as the word ‘girdle’.) “Watjean” stumps me, though; it may refer to an original landowner as so many odd NYC names often do.

A tear just might come to your eye when you thumb through this extraordinary book and see the acres upon acres of beautiful hotels, resorts and residences from 1880-1930 that have been replaced by ugly housing projects and empty lots!

CULVER’S TRAVELS. The demolition of a Brooklyn elevated link