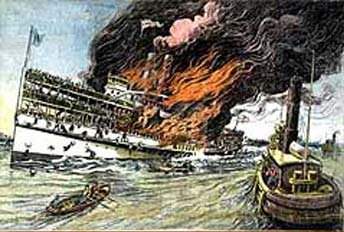 On June 15, 1904, the General Slocum, an excursion vessel on the way to Long Island for a church picnic outing, burst into flames in the East River. Over 1200 lost their lives.

Van Schaick’s decision to beach the Slocum on North Brother was a dubious one; there were closer piers at Port Morris, the southeastern tip of the Bronx. Since there were numerous wooden piers and oil tanks there, however, some historians say Van Schaick took the only course of action available to him. More outrageous was the fact that the Slocum was hardly prepared for any mishap as corrupt inspectors had declared the Slocum seaworthy despite:

–Life belts were nailed to the overhead in rusty wiring and were 13 years old; they had deteriorated such that the cork had turned to powder, dragging down anyone who wore them to the bottom; some were filled with cast iron

–Some of ship’s crew panicked

Steamboat company officials were tried but not convicted, even though proof was obtained that the owners had bribed the inspectors. Only Van Schaick served any prison time, 3.5 years at Sing Sing. He was pardoned by President Taft in 1912. 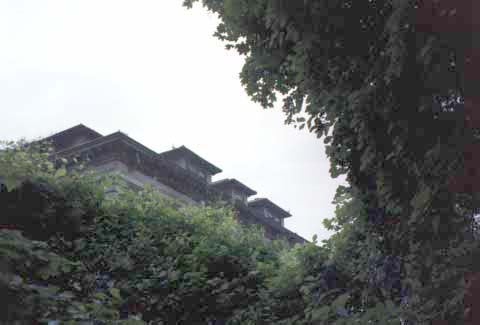 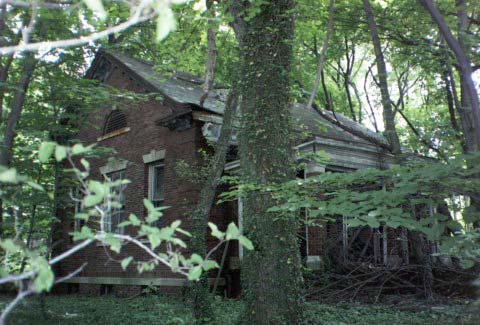 North Brother Island, where the Slocum was beached, is now a windswept, barren place visited now only by wading and migrating birds and urban explorers, like K. Jacob Ruppert, who kayaked out to North Brother with the Natural Resources Group of the NYC Department of Parks and snapped the shots of it you see on this page. North and South Brother are in the East River, east of Port Morris, Bronx and west of Rikers Island. The Brothers are officially off limits.

The islands were first sighted by Europeans in the early 1600s. In 1614 they were claimed for the Dutch West India Company by Captain Adriaen Block, but remained undeveloped for the next two hundred years. According to Other Islands of New York City chroniclers Sharon Seitz and Stuart Miller, brewery owner Colonel Jacob Ruppert (1867-1939) owned a summer home on South Brother Island from 1897 to 1907. The Colonel later owned the New York Yankees, and his great-grandnephew, K. Jacob Ruppert, took the photos of North Brother seen on this page.

New York City operated Riverside Hospital on North Brother beginning in 1885. In that era, NYC placed typhus, TB, cholera, yellow fever and smallpox victims on North Brother and Blackwell’s (now Roosevelt) Islands. Riverside was subsequently expanded to accept more and more patients from waves of disease plagues in 1886, 1892 (smallpox), 1893 (typhus), 1903 (TB) and 1916 (polio). Mary Mallon, a housekeeper and cook who carried typhoid (a bacterial disease causing high fever and acute diarrhea) but was unaffected by it, had spread the disease to estimated hundreds, causing anywhere from three to 50 deaths; she resisted capture and eluded investigators off and on between stints at Riverside between 1907 and 1915. In that year the City Board of Health declared her a public menace, and she was sent to North Brother for the remainder of her life. She worked in the hospital laboratory and was occasionally allowed to briefly travel to the mainland. She died in 1938. 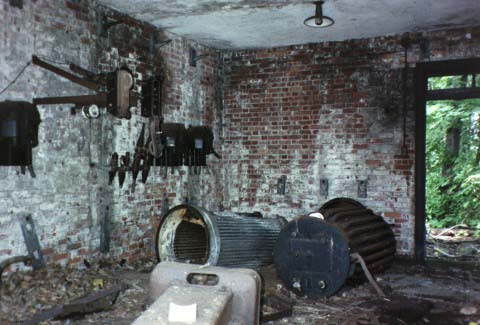 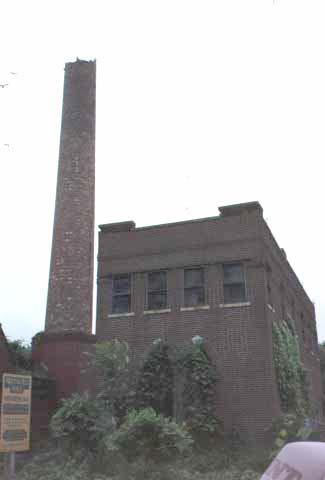 Island ruins. Note the heron nest at the top of the smokestack. 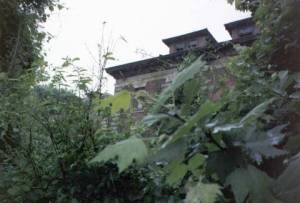 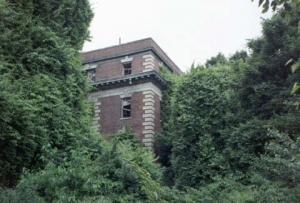 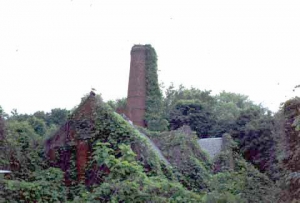 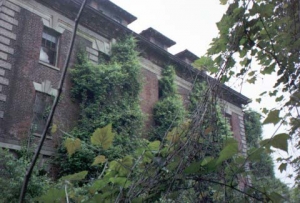 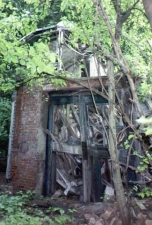 Riverside Hospital has been reclaimed by nature 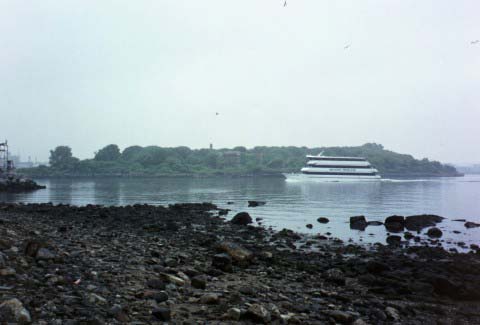 A modern excursion boat sails through the short strait between South and North Brother.

Such is the Brothers’ legacy to the Slocum tragedy. Proper memorials can be found in two of NYC’s boroughs: 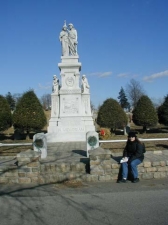 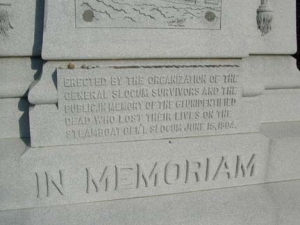 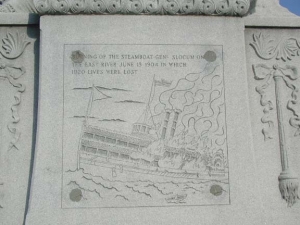 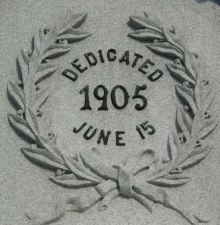 Many Slocum victims are buried in Lutheran Cemetery, a vast expanse in Middle Village, Queens. Most of them were from the Lower East Side, a neighborhood then known as Kleindeutschland: Little Germany. In the years after the tragedy, most of the traumatized German-Americans in the neighborhood would move away. Only a few German inscriptions on buildings, such as Freie Bilbliothek u. Leshalle (free library and reading room) on the Ottendorfer Library at 2nd Avenue and East 9th Street) are reminders of Kleindeutschland.

The Lutheran Cemetery Slocum monument was unveiled in 1905, exactly one year after the fire, by the youngest survivor, two-year old Adella Liebenow, who lived until January 2004 when she was 100. The inscription on the front of the stone is repeated in German on the back. 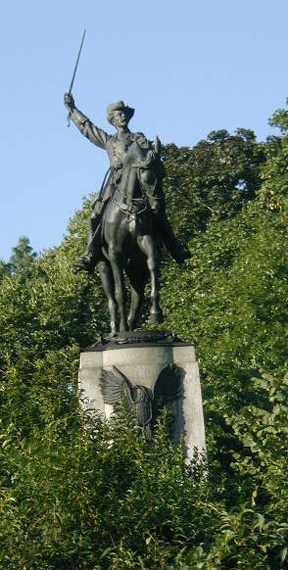 The following year, 1906, a smaller monument was erected in Tompkins Square Park (between Avenues A and B and East 7th and 10th Streets, just north of Kleindeutschland): a small 9-ft. stele made of pink Tennesee marble, featuring a relief picturing two children looking seaward, sculpted by Bruno Louis Zimm. Funds were provided by the Sympathy Society of German Ladies. In 1991, it was restored by the NYC Parks Department with funds from SUNY-Maritime College in Throgs Neck, Bronx. The children are described: “They were earth’s purest, children young and fair.”

Slocum, a West Point graduate, was commissioned a colonel of volunteers in the Union Army after the Civil War broke out. He commanded forces at Bull Run and Gettysburg and commanded a corps of Sherman’s army in the March to the Sea. He practiced law in Brooklyn after the war, and served in the House of Representatives from 1869-1873.

MacMonnies’ statue was installed in 1905, a year after the steamboat tragedy.

There is one more story to tell regarding the General Slocum tragedy. Initially fireboat Zophar Mills pursued the Slocum as the doomed ship steamed toward North Brother. Another fireboat, the Abram S. Hewitt, initially stopped at the East 67th Street pier to pick up New York City Fire Department Chief Edward F. Croker. The Hewitt was unable to arrive until the Slocum had been beached at North Brother.

The fireboat, named for NYC mayor Abram Stevens Hewitt (1822-1903) was built by New York Shipbuilding in Camden, NJ and launched the year the mayor died; she served in the NYC fireboat fleet until 1958. It was the last coal-burning fireboat in operation. 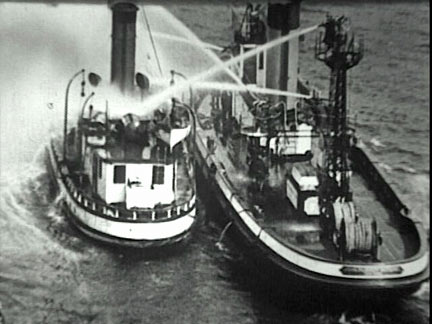 Today the Abram S. Hewitt, one of the last links to the burning of the General Slocum, is itself sinking in the Rossville Boatyard in Staten Island. Rossville chronicler Shaun O’Boyle took the picture at left in 1987 and the second in 2003, and the Hewitt has listed noticeably since (its name plate can be made out faintly through the 72 DPI resolution).

A common thread runs through the General Slocum fire, the Triangle Shirtwaist Factory fire in 1911, and the Malbone Street Wreck of 1918. All three of these events are emblematic of the absolute indifference to life and limb that US business had in that era. The Slocum was appointed with worthless safety devices; the shirtwaist factory owners callously locked the doors to prevent its immigrant workforce from leaving work early or pilfering any items; and Brooklyn Rapid Transit responded to a strike by using novices as motormen. Today, dangerous working conditions persist nationwide despite more governmental strictures, and there are still sweatshops; laxly followed regulations and incompetent seamen contributed to 2003’s Staten Island Ferry tragedy.

The Donald Trumps of the world don’t ride the Staten Island ferry, and they weren’t taking steamship excursions on boats like the Slocum in 1904.

MORE OF THE REAL SUBWAY

How about some nit-pik? In the foreground of one of the photos above, there is a partial image of a TRAILING boat-wake and showing a second boat following on. Prominent in the background of the photo is clearly identifiable as “North Island”, which the boats obviously are leaving. Caption: “Approaching North Brother by boat.”

I would be interested in knowing if any other editors out there have let you know about this. Or, perhaps a more appropriate question would be, “Am I the first and/or only nerd that noticed?” Use the Email address above. Thank you.

There is a photo of the aftermath of the General Slocum tragedy that can be viewed on Wikipedia here: