123rd Street, for some reason, is the scene for many venerable College Point architectural survivors… 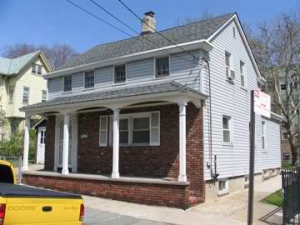 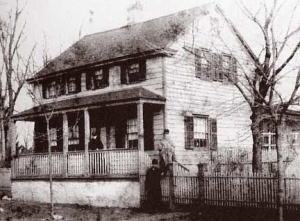 Its neighbor at 13-11 123rd is rather less recognizable. It was built by Jacob Salathe, superintendent of College Point’s Openhym Silk Mill. Pretty much all its Eastlake Gothic detail has now been eliminated. College Point by Victor Lederer 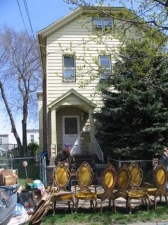 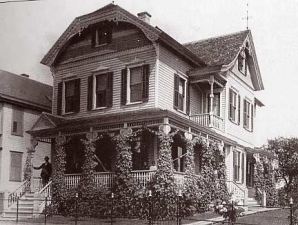 The grandest of 123rd Street’s survivors occupies its very own traffic roundabout at13th Avenue: the red-bricked, dormer-windowed Grand View Hotel, built in 1853 as Herman Schleicher’s mansion. Schleicher supported the South in the Civil War, and ran guns to the Confederates. It later became the Grand View Hotel (its elevation permitted views of the East River and Flushing Bay) and later became divided into apartments. 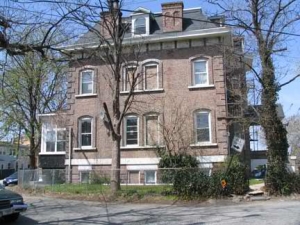 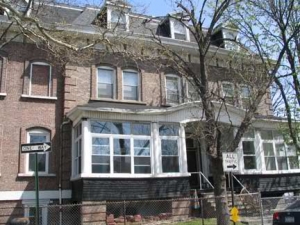 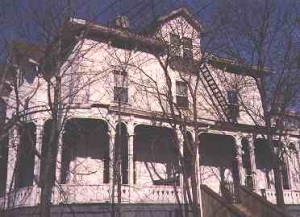 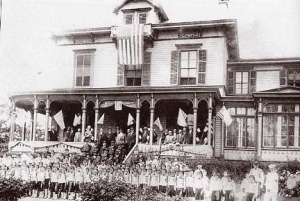 In the mid-1800s, Frederick Koenig, a German banker and a partner with Conrad Poppenhusen, built a large, wood-framed, hip-roofed mansion with a wraparound porch colonnade at where 120th Street north of 14th Avenue would be. After Koenig returned to Germany he sold it to another German businessman, Frank Boker. The building underwent several uses, as Jocker’s Hotel, Gerlach’s Academy for Boys, and the College Point Club. The short driveway to the mansion from 120th Street was named for him. The mansion became a hotel, the College Point Clubhouse, was divided into apartments, all the time falling into greater and greater disrepair. College Point by Victor Lederer

ABOVE LEFT: the College Point Club hosts a patriotic celebration about 1900. Every kid in the neighborhood must have been there! RIGHT: the Koenig-Boker House in 1999. 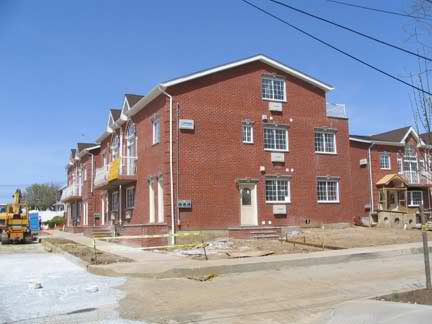 In 2004 the Koenig-Boker House was demolished and multi-family homes more acceptable to Queens developers have been built. Even the street pattern on 120th Street has been changed: the mansion once made 120th Street a dead end, with only Boker Court leading east to another dead end. However even this reminder of the old mansion has been eliminated since 120th Street has now been cut through and continued on to 12th Avenue uninterrupted. There seems to have been no great outcry at its loss. 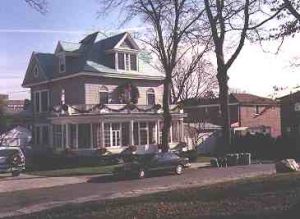 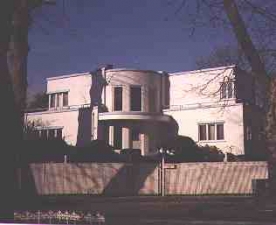 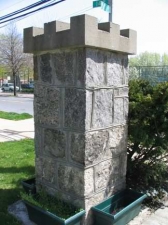 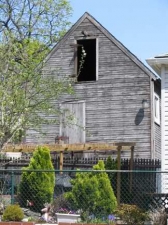 The Herman Funke Estate, adjacent to the Koenig-Boker mansion, has fortunately survived as Beech Court, on 121st Street north of 14th Avenue.

The cul-de-sac retains several outstanding homes including a Queen Anne classic and an Art Moderne. It is one of two Art Modernes in the area; the other one is on Malba Drive, a couple of miles to the east. The style was introduced at the Paris Exhibition of 1937.

A barn behind one of the Funke Estate houses; and one of two gateposts facing 14th Avenue.

There’s a house on 114th Street near the Poppenhusen Institute that used to be a firehouse. 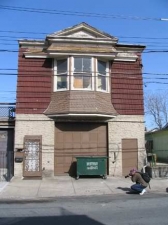 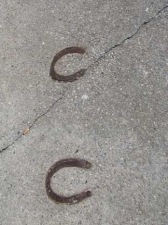 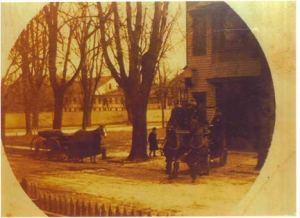 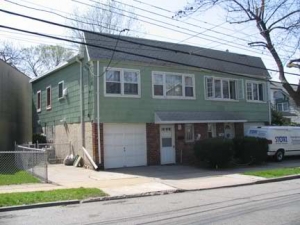 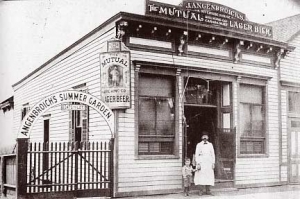 Victor Lederer in College Point claims that John Angenbroich’s Riverside Hotel is still standing on 119th Street south of Herman McNeil Park. This residence seems like a candidate to have been the old resort. Does the current owner know it used to be a saloon? Looks like every available piece of real estate on this College Point Blvd. telephone pole has been claimed. RIGHT: College Point’s answer to the East Village’s Jim Power’s crockery decorations on Poppenhusen Avenue (picture taken in 2004, and the artwork had largely disppeared by 2006). Leaving the Point with a view of Vivi, the Lost Whippet, and across Flushing Bay to LaGuardia Airport.

Special thanks to Tim Vogel and Gail Pickett, who your webmaster met on the #65 bus enroute to College Point.