The Golden Age of NYC Neon has come and gone. Believe it or not, the noble gas (since it combines with other elements only reluctantly, in lab conditions) is fairly rare on Earth, being available only in trace form in the atmosphere. If gathered in sufficient quantity it is a red-orange tangerine color. Most commercial “neon” signs featuring different colors employ chemical elements other than neon, such as argon, mercury and phosphorus.

Neon signs are prouced by applying electrical charges to chemicals sealed in glass tubes, and were first popularized by Frenchman Georges Claude in 1923 for a Packard car dealership in Los Angeles. Neon signs quickly became an indelible part of Americana, and while they’re less favored on billboards and store signage these days, you can still find quite a few in store windows. Ghosts of neon past still haunt the streets of NYC, as Forgotten NY correspondent Gary Fonville demonstrates here… 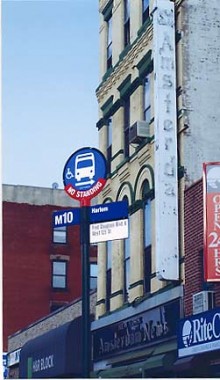 The Amsterdam News. Sign probably dates from the 1930-1940’s. Has been dark at least 40 years. The New York Amsterdam News is the largest weekly newspaper that caters to African-Americans. The Amsterdam News has a circulation of around 50,000. Founded in 1909 by James H. Anderson. The current editor and publisher is Elinor Tatum. Frederick Douglas Boulevard (8th Avenue) between 126th & 127th Street, Harlem, Manhattan. 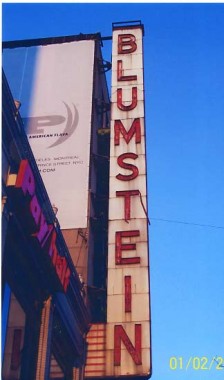 Blumstein’s Department Store. Started by Louis Blumstein in 1894 on Hudson Street. Blumstein employed Robert Kohn and Charles Butler as the architects of this 1923 building. Blacks were a large part of the customer base. However, they weren’t allowed to be employees at Blumstein’s. The store was boycotted until they changed their employment practices around 1940. Blumstein’s was the site of another notable piece of history. Martin Luther King was attending a book signing engagement when he was stabbed in the chest on September 20, 1958 by Izola Curry, a deranged woman. He was taken to Harlem Hospital where he recovered. This sign is probably one of the tallest and largest dilapidated neon signs in the city. It stretches nearly four stories vertically. Location: 125th Street between Frederick Douglas Blvd (8th Avenue) and Adam Clayton Powell Boulevard (7th Avenue), Harlem, Manhattan. 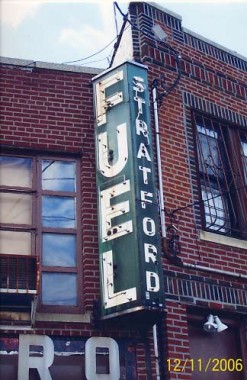 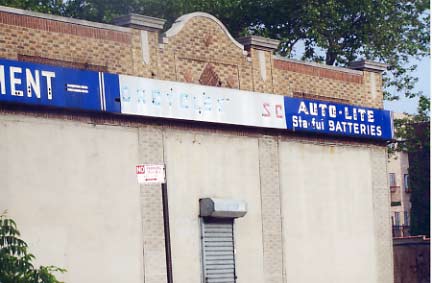 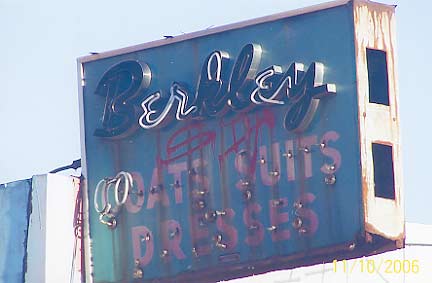 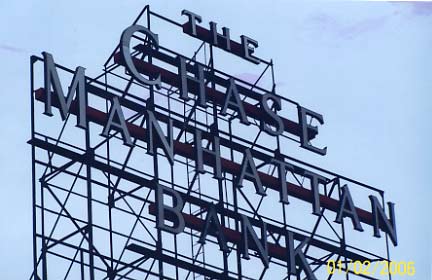 Chase Manhattan Bank. Williamsburgh Bridge Plaza, Brooklyn. This expensive sign was made obsolete by a corporate merger. This sign was built when The Chase Manhattan Bank was a seperate entity. Chase has had asomewhat complicated history, especially recently. Its most recent merger has been with J.P. Morgan & Co., resulting in J.P. Morgan Chase. The company was founded by Salmon P. Chase (1808-1873), US Senator and Governor of Ohio, Secretary of the Treasury and Chief Justice, US Supreme Court. His portrait appeared on the $10,000 bill until its discontinuance in 1969. 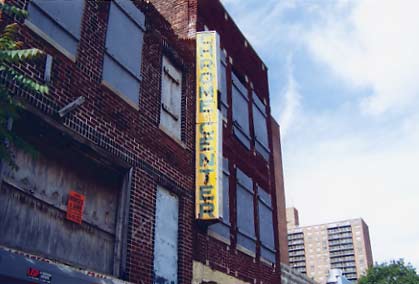 Chrome Center. Likely dates to the 1950’s when chrome and formica were the materials of choice for kitchen furniture. Location: Atlantic Avenue near Rockaway Avenue, Ocean Hill, Brooklyn. 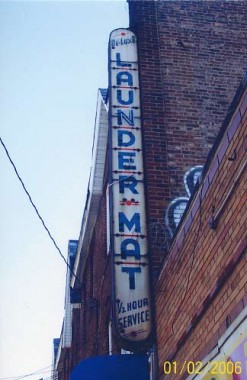 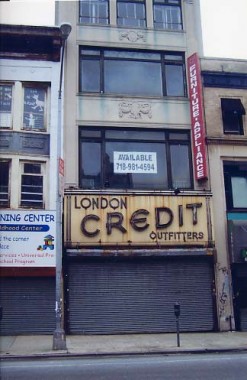 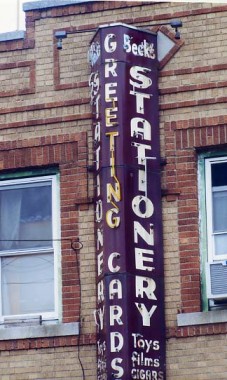 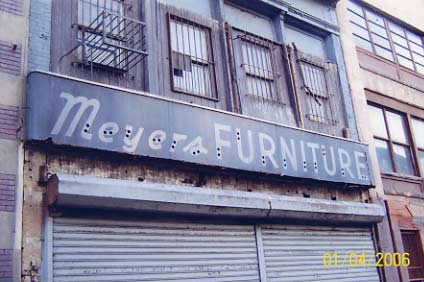 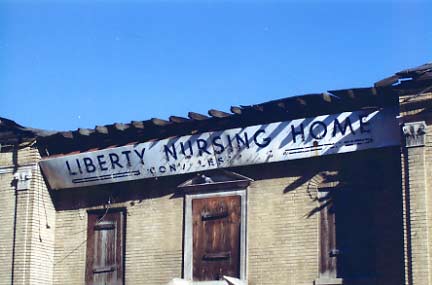 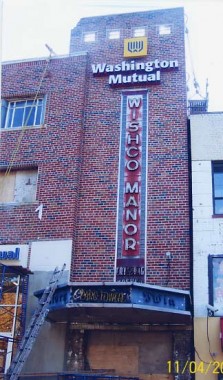 LEFT: The new meets up with the old. Wishco Manor and Washington Mutual Bank. This catering hall was a popular place to hold weddings and other functions well up into the 1960’s. But look at who has taken over the building! This branch will be a busy one because it’s at a major transportation hub. Many bus passengers transfer here for the number 3 and 4 trains. It seems that you can hardly go anywhere in the city and not see a new branch of Washington Mutual celebrating a grand opening. Location: SE corner of Eastern Parkway & Utica Avenue, Crown Heights, Brooklyn RIGHT: Only part of this sign is operational. Rainbow Cafe, 5th Avenue and 39th Street, Sunset Park, Brooklyn. This bar has since closed. 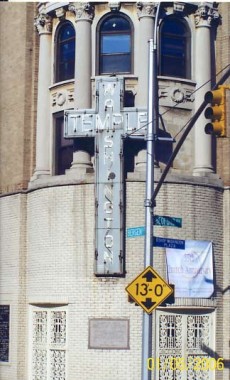 ANCIEN REGIME: Before the Corvingtons and Crooks took over, there were all kinds of weird lampposts on the scene

[…] had an intimate knowledge of the city. He has contributed several invaluable articles to Forgotten New York. We talked of Chase’s troubling […]

[…] had an intimate knowledge of the city. He has contributed several invaluable articles to Forgotten New York. We talked of Chase’s troubling […]