Jahn’s chain of ice cream shoppes once covered the NYC metropolitan area with a heady combination of lactose and sucrose. The first Jahn’s was opened way back in 1897 in Mott Haven, Bronx by John Jahn, which (dissapointingly) is pronounced “John JAN.” His three children, Elsie, Frank and Howard, opened Jahn’s in Jamaica, Richmond Hill, and Flushing respectively.

Jahn’s is most celebrated for its Kitchen Sink sundae, which was large enough to serve six. There were also the Boilermaker, the Awful Awful, the Suicide Frappe, Screwball’s Delight, the Joe Sent Me, the (#”&’$?/) Special, and the Flaming Desire, five scoops of ice cream topped by a flaming sugar cube.

I’ve been taking my kids here once a month or so for many years now and I have been a regular since I moved to Kew Gardens as a kid in 1972. I’ve always loved their ice cream and, especially, their amusing menu. Ever order a Kitchen Sink or a Boiler Maker? Fun stuff. Jahn’s was one of the few remaining links to the glory days of nineteenth century Richmond Hill. It never really changed. The carved up wooden walls, the marble counters, the converted gas lights, the coin-operated player piano, the period art and antiques, it is all still there. My kids loved watching that old piano light up and play a song by itself.

I spoke to the owner who said that after 18 years, they just couldn’t make it here anymore. Such is life I guess but I am really going to miss the place. The antique fixtures were purchased in bulk by someone who is restoring a period ice cream shop somewhere in the mid-west. I did manage to buy a few of the menus though. I might get one framed. The pictures above were taken as some of the items were being packed up for shipment. I’m glad the kids and I got one more sundae and a chance to see the old place off.

Your webmaster has been in Jahn’s just once: The 86th Street branch. I celebrated graduating high school in style there in 19, er, 75. Jahn’s had a regular diner-food type menu in addition to its ice cream creations. I’ll have to bring 5 ForgottenFans and get a Kitchen Sink before Jahn’s gets banned forever. 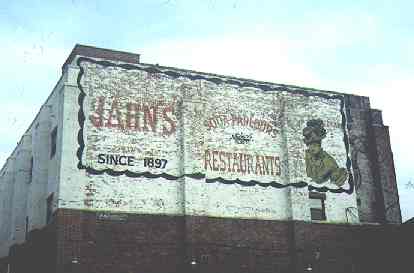 Forgotten Fan Pat Cullinan has 4 PAGES of photos of the late Richmond Hill Jahn’s..enjoy…till they replace computers with lick-o-vision you can’t taste the ice cream though.