A February 2008 walk in Jersey City’s north side provided terrific Manhattan views, a look at a cobblestone carriageway and a view of one of New Jersey’s oldest houses… 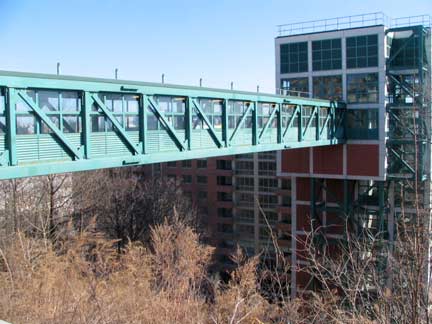 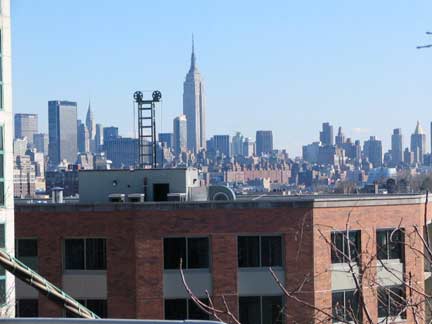 It’s much, much easier for the car-free (and loving it, as Don Adams used to say) to get to the north side of Jersey City (The Heights) from New York than it had been. The trip used to involve a PATH train ride to Journal Square and about a half-hour hike to today’s viewing area (the neighborhood around Riverview Fiske Park on JC’s north side). Now that we’re in the 21st Century, New Jersey Transit has returned to that newfangled method, the trolley, and made many of Hudson and Bergen Counties’ communities a lot closer than they used to be.

Today (February 27th, 2008) the not-unexpected news came that NYC’s Metropolitan Transit Authority announed that budget cuts have shelved the Second Avenue Subway until 2015 at the earliest. Your webmaster can only look with envy across the Hudson to our NJ cousins, who have built an admirable, efficient and dare we say handsome new trolley system in just a few years. When is the MTA going to admit defeat, cancel the pie-sky SAS and institute dedicated bus lanes on north-south Manhattan avenues? But, as Norm Crosby would put it, I digest…

From the Pavonia Avenue PATH station, I walked a block to the Hudson Bergen Light Rail and caught a northbound. The line runs along the Jersey City-Hoboken city lines, which also happen to be located along a high cliff: a portion of the New Jersey Palisades that border the Hudson River. Alighting at the 9th St/Congress Street station (named for a Hoboken and Jersey City streets it serves) I rode an elevator and crossed a bridge over the Palisades (photo left), which are about as high as a 5-story building here to the Jersey City side.

Immediately after crossing the bridge, you’re on the historic Paterson Plank Road, which today is a busy auto route from Hoboken to Paterson and dates all the way back to the colonial and Native American periods. It was indeed once paved with wood planks because this part of NJ is extraordinarily swampy and carriage and coach wheels were getting stuck in mud. Due to its position at the top of the Palisades, it commands terrific views of Manhattan (right) but, we’ll have better ones in a friendlier pedestrian setting later on this page. 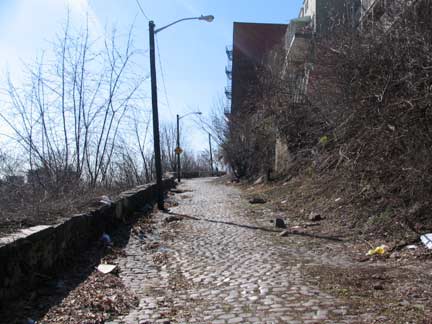 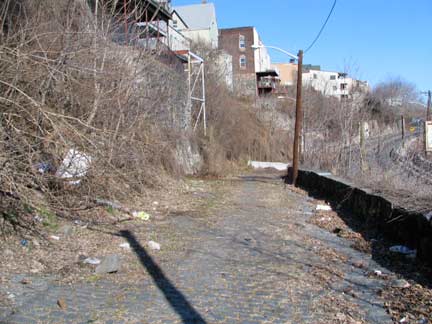 Holland Street connects the Paterson Plank Road a short distance south of the 9th-Congress Street HBLR station with Bowers Street and Palisade Avenue at the top of the cliffs, running sideways up the hill to negate the sharp drop. It, too, dates to the colonial era and used to take carriages down to Paterson Plank Road and ultimately to Hudson River ferries. Note: accessing Holland Street from across Paterson Plank Road requires vigilance, as there is pedal to the metal traffic here. Employ caution when crossing. 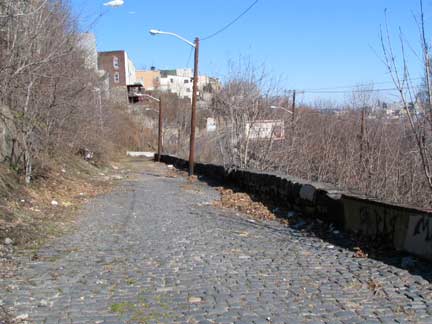 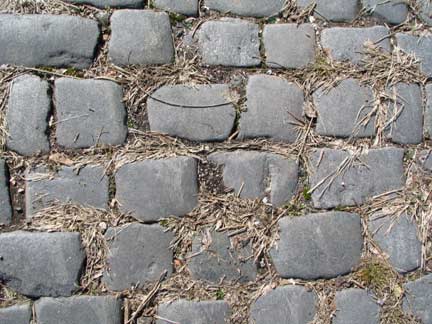 Holland Street is one of Jersey City’s 5 remaining streets, or parts of streets, that still have visible paving stones. 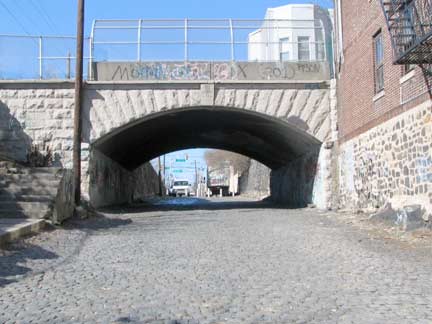 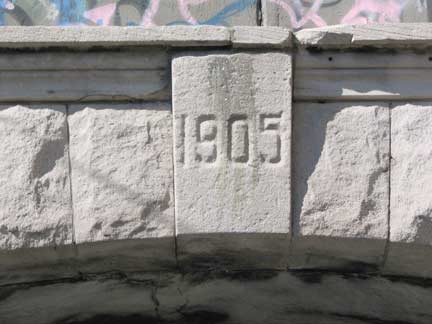 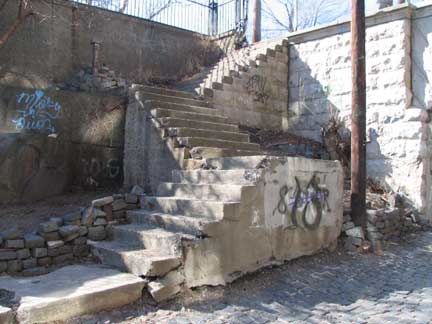 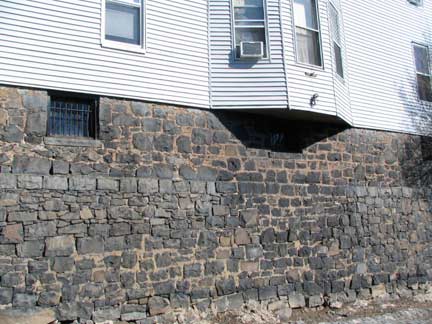 Abandoned staircase from Ogden Avenue to Holland Street. Are the houses on Palisade Avenue all built on rock like this, or is this merely a retaining wall? 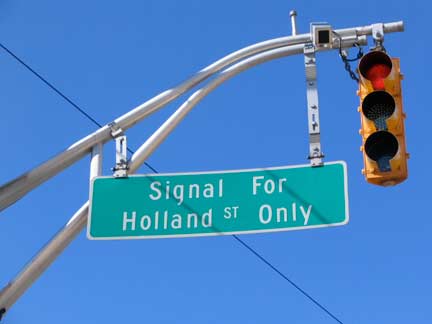 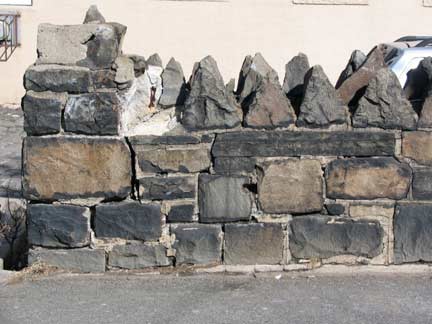 The portion of Holland Street from the Ogden bridge to Palisade Avenue is pretty much used for parking trucks and vans, and this sign signifying the stoplight differentiating it from Bowers Street carries the only sign identifying it as Holland Street. (RIGHT) stone fence dividing Holland and Bowers Streets. The spikes are there to discourage fence-sitting.

Holland Street has attracted the attention of the renowned Jersey City Landmarks Conservancy, which schedules yearly cleanup and weed-pulling. There is a proposal to make it a part of the adjacent Riverview-Fiske Park (see below.) 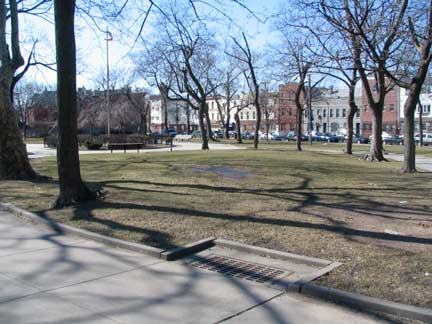 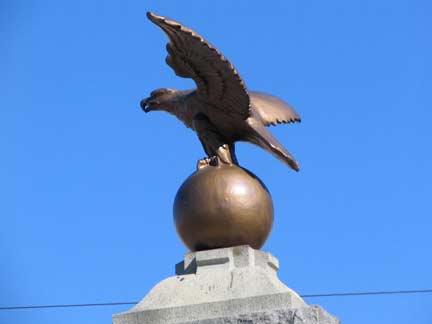 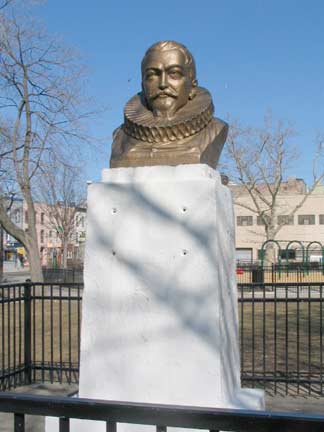 Riverview-Fiske Park runs between Griffith and Bowers Streets from Palisade to Ogden Avenues. It’s guarded on the NW entrance by a gatepost with an iron eagle and a bust of Henry Hudson that has lost its plaque.(ForgottenFans, I need help on who the sculptor was).

Riverview-Fiske Park’s main claim to fame, however, is… 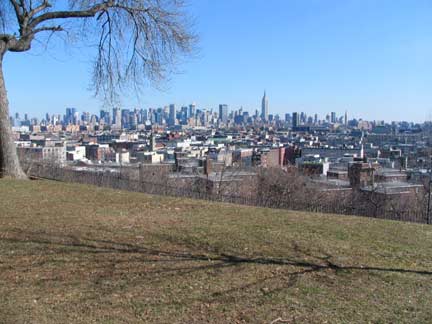 …its terrific views of Hoboken! Oh, and there’s the skyline of an even larger city off in the distance, punctated by the King Of All Buildings center stage. Only when you get sufficiently away from it, say in Jersey City or in Queens, do you appreciate how huge it is. It’s the Jupiter of NYC and nothing else much compares now.

A short way up Palisade Avenue from the park, at 531 Palisade between Bowers and South Streets, is another Jersey City colonial-era item… Jersey City’s second-oldest house (only the Apple Tree House in Bergen Square is older) is the Van Vorst House. The latest research claims it was built in 1742. City of Jersey City:

Though many of the details are clouded by time, the main facts concerning the construction and ownership of the house by the Van Vorst family are known. During the Colonial era, this northern neighborhood of what is now Jersey City was part of the Township of Bergen in Bergen County. The Town of Hudson came into being on March 4, 1852 and was renamed the City of Hudson on April 11, 1855. In 1870 Hudson City consolidated with Jersey City.

The little stone house originally stood on a farm with what was known as Bergen Woods all around. The nearest road would have been Bergen Wood Road – now Summit Avenue — running from the Five Corners.

In 1818 Cornelius Van Vorst willed this property to his son, John. In turn, this John Van Vorst also passed the property to a son named John. 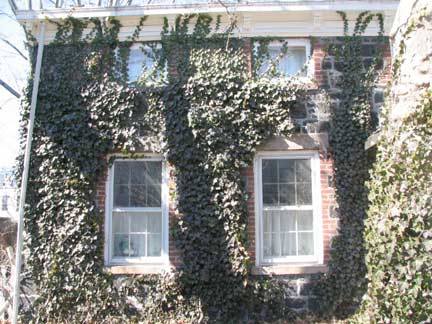 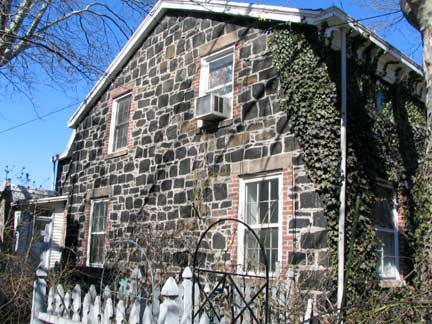 The original Cornelius Van Vorst is believed to have arrived here in 1636. He became Superintendant of the Pavonia colony — most of today’s Hudson County. For more than two hundred fifty years, the Van Vorsts were one of the county’s leading families.

In 1859 Augusta Waugh bought the property on Palisade Avenue from the Van Vorsts. The following year Cornelius Van Vorst (a descendant of the original settler) was elected mayor of “old” Jersey City. This was then a part of what is now the Downtown section of Jersey City. A search made by Alice Larkins for the Jersey City Historic Districts Commission showed that the Van Vorst House came into the possesion of Daniel A. Tuttle and his wife seven years later.

The next owners were Emil Stahl, a prosperous importer and inventor, and his wife Elizabeth. The Stahls bought the property in 1901. On September 17, 1935 they sold it to Captain John A. Byrnes and his wife Lovina.

Emil Stahl, intrigued by the house’s history, made a search of the records in Trenton, establishing 1742 as the likely date of construction.