It’s true that they were invaders from another planet, ruthless, merciless killers who treated us the same way we treat cattle: as food stock. They were octopoid bloodsuckers in the book and tripedal, three-eyed mutants in at least two films. But damn, those Martians from H.G. Wells’ War of the Worlds had great modular machinery, and you have to admire ’em for that, at least. There was that heat ray attachment, that toxic “black smoke” spreader, and in the movies, especially, that videocamera they had that was mounted on the flexible neck as pliable as a snake’s. They had some hardware…

Concurrently, I’ve also been fascinated with the Department of Transportation’s (who may also be as evil as Wells’ Martians) array of lamppost attachments, such as stoplights, don’t walk signs, and fire alarm lights that are attached to lampposts and utility posts around town. 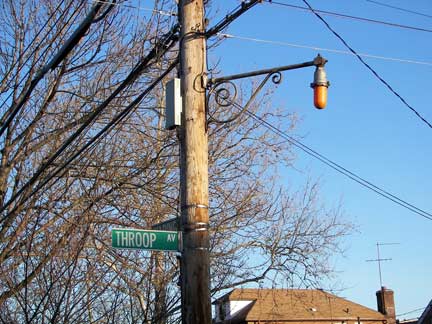 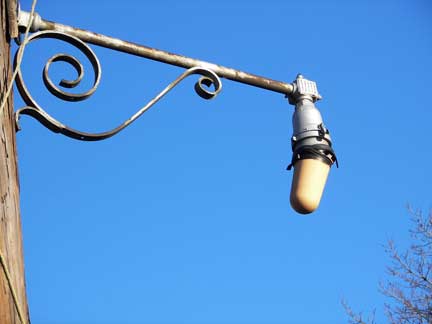 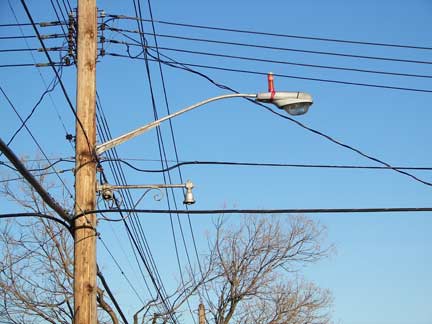 The scrolled brackets seen here are quite old–I’ve seen them on photos from the 1910s. They originally were used for standard street lighting and most of them held fanned “radial-wave” reflectors. Sometime in mid-century, they were given the new task of supporting fire alarm lamps that at first were globe-shaped and which, in the Fab Fifties, gradually were replaced by these familiar oblong ones (known officially as 3857 luminaires).

As you can tell here, they didn’t adhere especially well to their mounting equipment and the DOT has had to use a lot of tape to maintain the luminaires in place.

In the early 2000s, these fire alarm lamps began to be replaced by the orange “top hat” markers you see on the streetlamp at left. photos: Don Gilligan 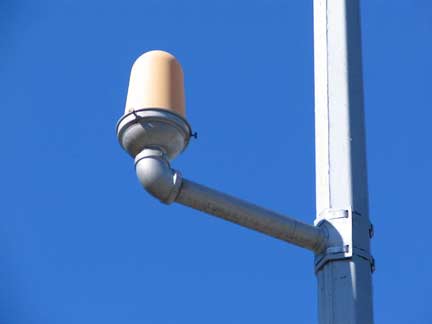 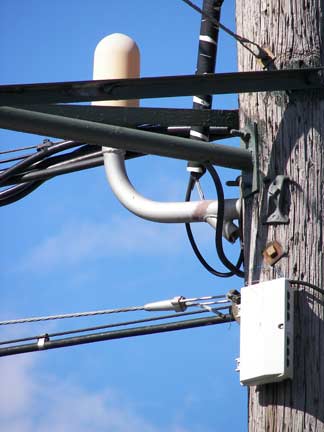 In the 1950s, the scrolled brackets began to be eased out and replaced by these simple pipe-shaped mounts. In the sixties, a rarer variant with a wider curve appeared (left, 57 Ave and 230 Street, Oakland Gardens; right, Givan Avenue, Baychester). 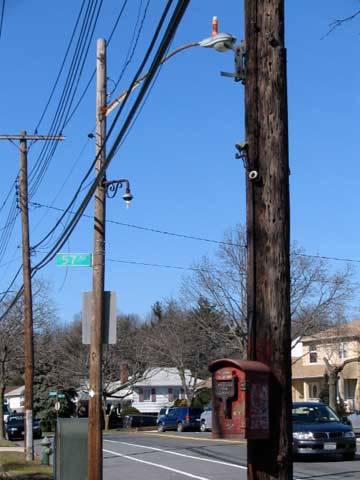 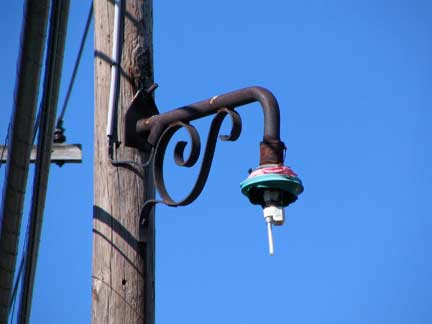 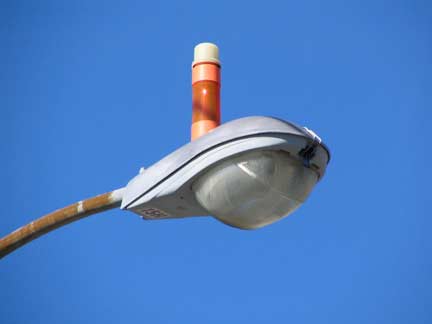 Easthampton Blvd. and 57th Avenue, Oakland Gardens. Here we see a shorter variant of the scrolled bracket. This one appears dead, replaced by the new “top hat” signal. 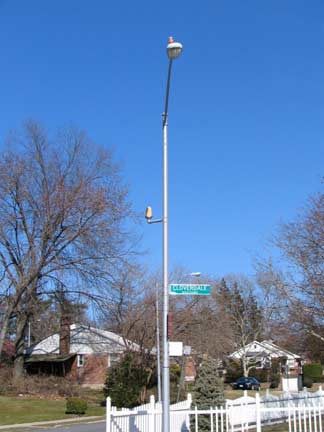 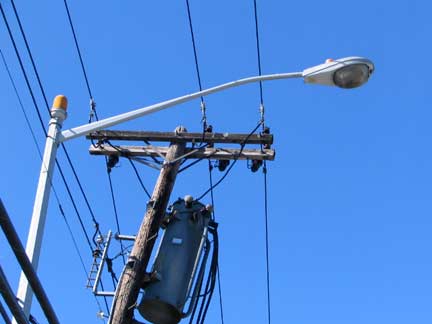 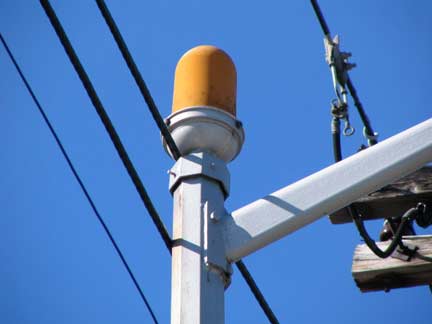 Cloverdale Boulevard and 53rd Avenue, also Oakland Gardens. Here’s a very rare instance of two fire alarms lights mounted on opposite corners, and they embody the two competing mounting schemes the DOT employed from the 1950s through the early 2000s: mount using the “pipe” appendage on mid-shaft, or mount at the apex of the post. I believe the top-mount has prevailed over the years — but not by much.

I should also mention that, at the dawn of the octagonal-pole era in the 1950s, Westinghouse “cuplight” luminaires were used extensively and the fire alarm globes or oblongs were mounted directly on top of them, giving the streetlights a two-headed appearance. That approach was also used with “crescent-moon” lamps in outlying areas in the 5 boroughs as well. 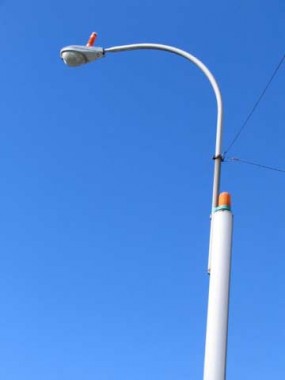 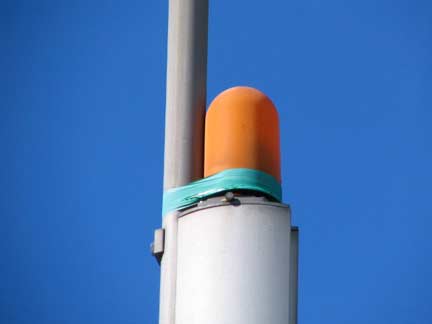 When David Deskey-designed lamps first came on the scene in the early 1960s, they had their very own fire light design, the squarish one seen at right. As often as not, though, the oblong 3857s were employed. As we see on both these lights, it was difficult to keep either in place and sticky tape was resorted to occasionally. Very rarely, midshaft curved pipes are used on Deskey posts to mount fire alarm indicators. These intricate Beaux-Arts styled fire alarm brackets were used on cast-iron posts, such as Bishop Crooks, long-armed Corvingtons and Type F posts around town but never on wood telephone poles. The last intact one I saw on a Bishop Crook was on a post that survived till just last year (2007) on Warren and Washington Streets in Tribeca.

The one we see at left was mounted on an octagonal post on the Coney Island boardwalk and was left over from the boardwalk’s previous generation of modified Twinlamps.In 2007 they were all replaced by new retro-Twins, thus this one is now deceased.

There are a couple of instances of this variety bracket remaining in New Utrecht Avenue and 60th Street in Borough Park, Brooklyn, and a pair on Avenue L in Canarsie. 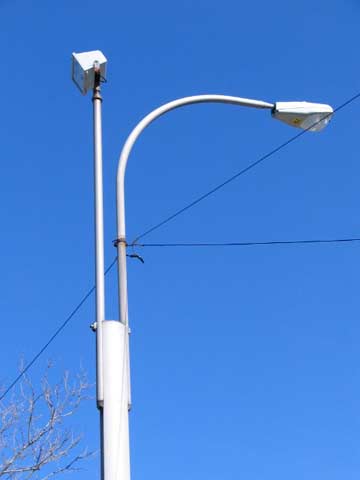 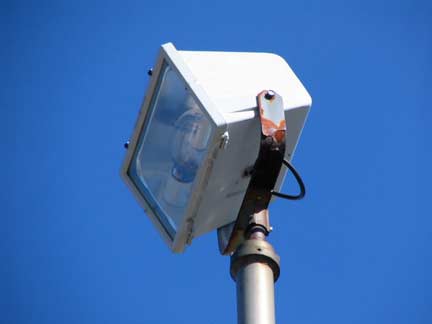 The Deskey once again proves how adaptive it is by supporting this high-intensity park/basketball/handball court illuminator at Linneaus Park in Oakland Gardens.

These are now the dominant form of park lighting in NYC, but very occasionally their predecessors can be found… 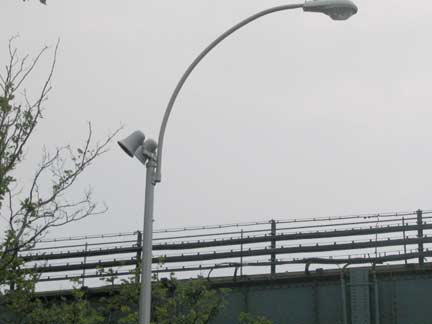 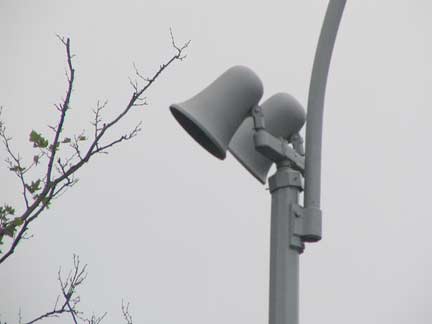 …the much-lower intensity mercury park lamps like these on West 12th Street near Neptune Avenue in Coney Island, which glowed a weak green-white, matching the dominant variety of streetlighting from 1960-1972.

These bell-shaped lamps were versatile as well. I have occasionally seen them mounted on the scrolled brackets shown at the top of the page that usually supported fire alarm indicators. 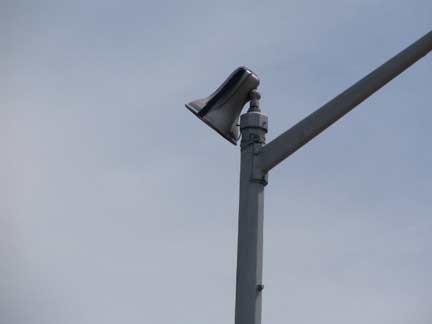 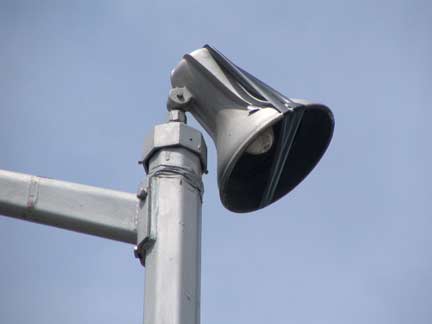 They were frequently in pairs, but could also be used singly, as this slightly more flared variant I found on 24th Street near 5th Avenue in Greenwood Heights near Green-Wood Cemetery. 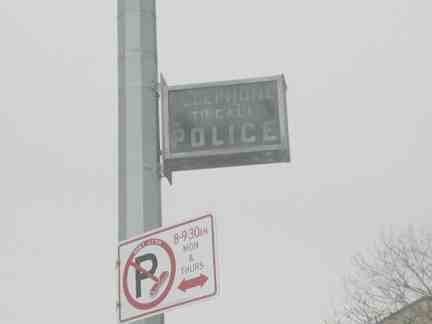 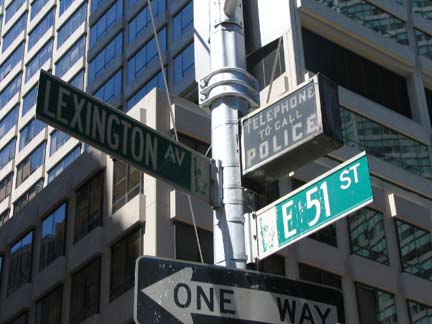 In the 2000s, if you need the cops,you are pretty much expected to call 911 for assistance, or use the police call button that is occasionally mounted at fire call boxes… those that haven’t yet been decommissioned.

However, dedicated police call phones were formerly set up on lampposts around town, and they were marked by these rectangular lighted indicators. Though the phones are long gone, a dozen or so indicators can still be seen around town. I doubt any still light up. 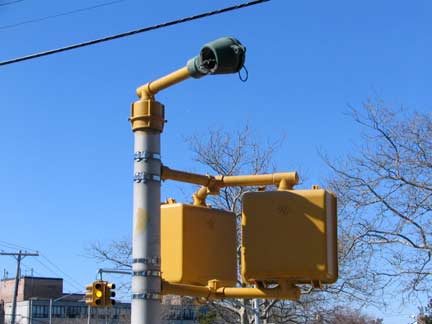 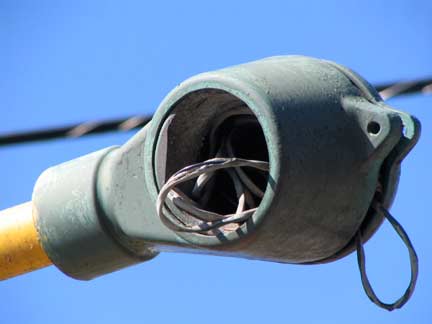 Forgotten Fan Steve Okonski: These were sonic traffic signal controllers. They would emit a high frequency clicking sound, monitor for an echo that indicated the presence of a vehicle, and then cycle the traffic signal. Since they mimicked the echo-locating of bats, maybe they should be known as Gotham’s “bat signals.”

Now many locales employ a different type of vehicle monitor that is instead embedded in the pavement.

Are there any other weird streetlamp “appendages” we should mention? Write your webmaster at erpietri@earthlink.net.