Foggy Bottom, located west of the White House between E and K Streets on the north and south and the Potomac River on the west, is best known for being the home of the US Department of State, the World Bank, the Kennedy Center for the Performing Arts, and most prominently George Washington University, which owns much of the local property. More infamously it’s also home to the Watergate complex, which in 1972 was the site of abreak-in at the Democratic Party National Committee, the prosecution of which brought to light illegal activities committed on behalf of, and authorized by, President Richard Nixon.

The derivation of the neighborhood’s name may lie in its former status as home to brweries, gashouses, and factories, or simply its location in a low-lying, marshy area. Foggy Bottom is located at the site of a former small town, Hamburgh, which disappeared in the 1800s when the Pierre L’Enfant street grid was imposed.

Presently, Foggy Bottom is a mix of picturesque brick buildings, bland apartment houses, the GWU campus and a flock of new glass-fronted buildings – a phenomenon new to Washington.

Your webmaster is here to see some alleys. 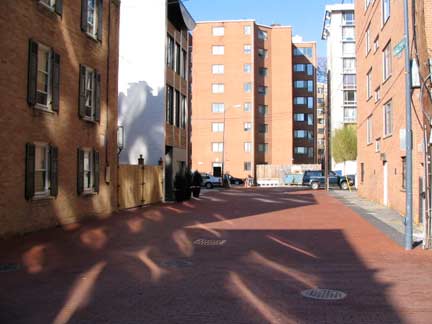 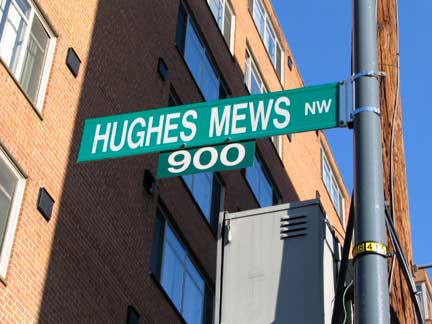 Prior to my 2007 visit to Washington, I hadn’t known about its hidden lanes and alleys that much; there’s so much to see that it’s hard to stray away from the main sites since they’re so compelling. Foggy Bottom has a small network of alleys running between 25th and 26th Streets and I “Eye” and K Streets (in Washington there is no J Street. There are a couple of theories behind that, too; it’s thought that the powers that were when the L’Enfant grid was laid out did not like the USA’s first Chief Justice John Jay, and chose to insult him. Your webmaster’s thinking, though, is that in the late 17th and early 18th Century, the letters I and J were not yet definitively identified as separate from each other, and so when the lettered streets were named, J was skipped or perhaps wasn’t even considered).

The main east-west alley in the area is Queen Anne’s Lane, which, oddly enough in the capital of the land of liberty, is still named for a monarch whose country the USA broke away from. Anne Stuart (1665-1714) reigned as Queen of England, Scotland and Ireland from 1702-1714, and she was the first Queen of Great Britain when England and Scotland united in 1707.

The rhyming Hughes Mews, above, runs both above and below Queen Anne’s Lane between 25th and 26th Streets. It retains red brick paving seen on so many Washington and Georgetown streets. 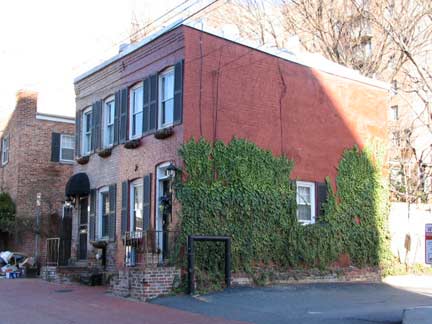 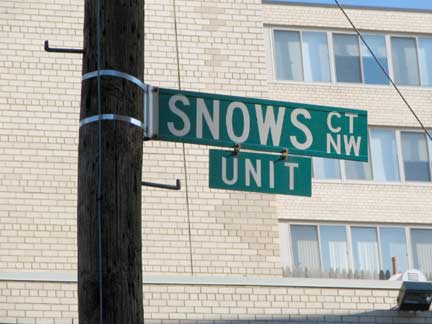 Snows Court, and its cozy townhouses, forms a crescent shape at the east end of Queen Anne’s Lane east of 25th Street. 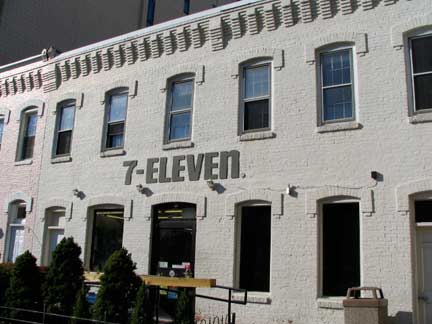 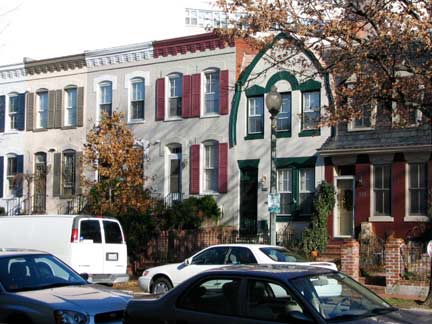 Nearby Foggy Bottom scenes. The 7-Eleven here has eschewed its usual garish sign and adapted to the surroundings. 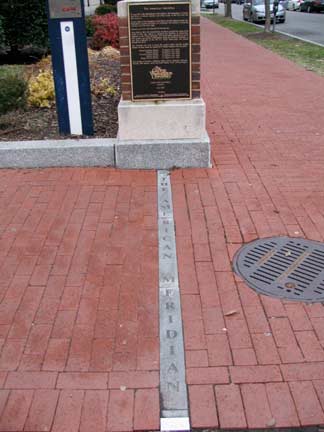 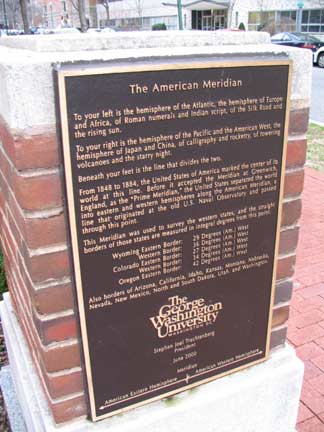 24th and H Streets. This is the Thomas Jefferson-proposed site of the American Meridian, a point where he had proposed that all longitudes in the USA would be measured from. The USA did adopt this spot in Foggy Bottom as the “center of the world”, 0 degrees longitude, here between 1848 and 1884. The American Median still plays a part in USA geography, however; the borders of many of our western states were measured from it, which is the reason their borders are so straight compared with eastern states. Wyoming’s east and west borders were set at 29 and 36 degrees west; Colorado’s at 27 and 34 degrees; and Oregon’s east border at 42 degrees.

In 1884 the USA returned to the Greenwich, England Prime Meridian.

For further information, including the Naval Observatory’s part in the American Meridian, see the February 7, 2005 DCist article. 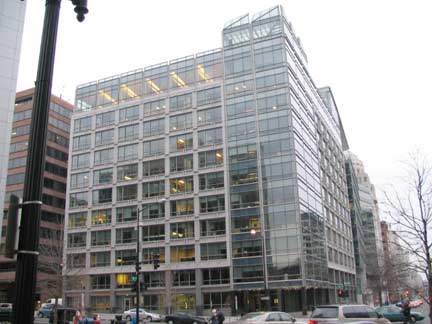 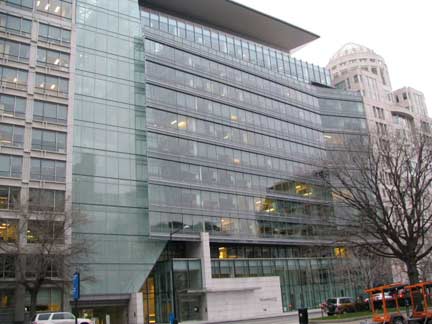 Heading southeast along Pennsylvania Avenue toward the White House from Foggy Bottom, we see a flock of Washington’s new glass skyscrapers (Washington has a strict height limit on its buildings, so its skyline will never look like New York’s or Chicago’s), and the mid-2000s trend of glass office buildings and even residences has made its mark here. 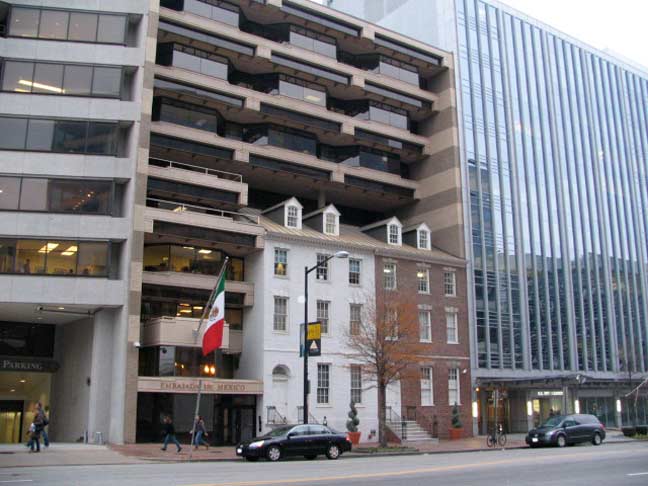 The transition along Pennsylvania Avenue hasn’t always been a smooth one, and developers are forced into building around the occasional holdouts. 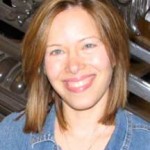 FNY thanks author, ForgottenFan and new Foggy Bottomer Dawn Eden for assisting with this page