DOG DAYS. A diner I wish I had seen

Al Deppe’s, the former Staten Island hot-dog slinger, wasn’t exactly a Tail O’ The Pup, the world-famous wiener-shaped West Hollywood, CA hot-doggery (that sadly was forced to shut down in 2005 when its lease wasn’t renewed) but it was a Staten Island touchstone for decades.

Restaurateur Deppe (the Graniteville thoroughfare Deppe Place may or may not be named for him) opened his roadside diner in 1921 at the intersection of Richmond Avenue and Arthurkill Road, still one of the island’s main intersections.

Deppe ran one of NYC’s only diners, other that Feltman’s and Nathan’s in Coney Island, to make hot dogs the main feature. Ice cream was also advertised promeinently, making Deppe’s a likely destination for your webmaster, had I been a Staten Islander in the mid-20th Century.

Al Deppe’s, northwest corner of Arthurkill Road and Richmond Avenue, ca. 1953. This was the era before the West Shore Expressway and Korean War Veterans Parkway were constructed (in 1972 and 1976 respectively) and Richmond Avenue was your best bet to travel from the Eltingville-Greenridge border (where Deppe’s was) to the south shore of Staten Island, or north to the Bayonne Bridge or Richmond Terrace, where ferries to Bayonne were available, or east on Richmond Terrace to the ferry to Manhattan (which admitted autos until the terrorist attack on 9/11/01).

Note the route sign NY 440: the state route was designated from the Outerbridge Crossing along Drumgoole Boulevard (built in the 1940s) then north along Richmond Avenue to the Bayonne Bridge. When the Drumgoole was widened into Richmond Parkway (Korean War Veterans Parkway since 1997) 440 remained there, but upon completion of the West Shore Expressway in 1976, the 440 designation shifted there. 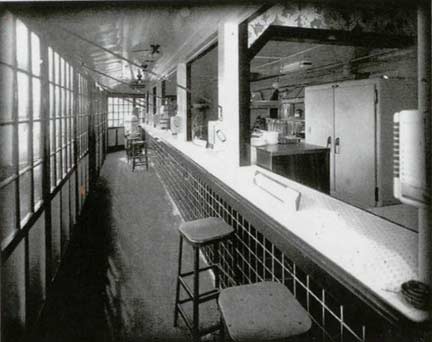 I’m unsure about the nature of the park that Deppe opened alongside the restaurant…I imagine it was an amusement park of some sort (Forgotten Stateners, help me out here). This look at the interior likely doesn’t do it justice, since I gather it was a hoppin’ joint back in the 40s and 50s.

The Playland was an indoor Arcade with Skee Ball, Pinball Machines and small kiddyrides (like the old ones in front of Supermarkets in years past like the horses or fire engine) You would earn points on Skee Ball then could collect them then redeem them for prizes. It’s a shame it was knocked down for a Parkway that was never finished. [ForgottenFan Robert Ciraola]

The playland you show the ticket for was actually an area within the building. Behind the the restaurant and clam bar there was a large area where Al Deppe had a carosel that he imported from Germany. It was fantastic. There was also a player piano and other smaller games. In the restaurant area there was a chicken in a cage type machine that would peck at the coin slot till you fed it a penny and then the feed would fall out in his dish. There was also a monkey/organ grinder type machine where music would play when you gave the coin to the monkey and he would put it in the slot. When the music played he got a treat. Kids absolutely loved it. [ForgottenFan Martha D’Arbanville]

There’s an unsuspected aspect to Al Deppe’s: the presence of an underground tunnel under Arthurkill Road. Deppe purchased a venerable mansion constructed in 1850 at Richmond and Wainwright Avenues, just south of the restaurant, as a residence. Deppe installed a bar and converted an adjoining enclosed porch into a cocktail lounge. He also built a 200-foot tunnel between the house and his famous restaurant across the street so that he could safely carry the day’s recipts back home. I wonder if that tunnel is still under there. Bob Diamond…Steve Duncan…Miru Kim…anyone care to find out?

Deppe’s closed in the late 1960s or early 70s when the city wished to build Richmond Parkway further northeast, and Deppe’s stood in the way. That section never was built, though, and there’s an overpass to nowhere over Richmond Avenue.

I own a machine called the Violano Virtuoso that plays the piano and violin – for five cents. They were popular from about 1911 up until WW2. It was made by the Mills Novelty Company in Chicago in 1924 and my recent research into it’s history suggests that it was originally owned by Al Deppe.

I am wondering if anyone has any recollection of seeing such a machine in the Playland at Al Deppe’s place or knows whether there are any photos of the inside of the Playland that might show it there?

The website listed above shows photos of what the machine looks like if that helps jog a memory.

I am a granddaughter of the deppe’s and I’m trying to locate the menu to the restaurant. If anyone can find it, PLEASE let me know. Thank you

I am trying to find contact information for Al Deppe, age around 65, husband of the late Donna Rae. He went to Catawba College back in the 1970’s with my husband and visited us in New Jersey when we were first married. He would love to share some memories with him. Thanks for any help you can give me!

I used to go to Deppe’s with my grandfather after fishing in the Kull if you can believe that. Black fish, weakfish and flounder. But what I remember best was all the music players and mechanical band. That was around 1953-4. I was 5-6 years old. I have never forgotten watching the chicken and the organ grinder and the what to a 5 year old appeared to be a full mechanical band. We would get hot Dog and a root beer. Made a great outing for grandpa and me. fond memories from a 68 year old kid!

My father used to take me and my cousins out every Sunday for a “mystery ride.”

One day he told us he was taking us to Al Deppe’s….I was very young at the time so this had to be 40 years ago. I had never been there so I was really looking forward to it. We drove all over the place for hours before my father finally came to the conclusion it wasn’t there anymore so I still never got there! lol!

Our mom and dad would take us (sometimes) to Al Deppe’s for hot dogs. Their were five kids. Not easy for hard working parents. But the memories will remain in my heart and mind forever. This was sometime in 1950. I understand now why we had a picnic in the car. We didn’t miss all the great attractions inside , that our parents couldn’t afford. Our memories of our picnics will last forever.

I remember going to Al Deppe’s with my family in the 50’s and 60’s. We lived in Great Kills on Hillside Terrace by Jack’s Pond. I can still see that live Chicken in it’s cage dispensing me my fortune with it’s beak . We all loved that place, sorry it’s gone. The food was great and a lot of great memories, it was a whole different simpler time to grow up on Staten Island. I will always love Staten Island.

This literally made me cry. I loved going to Al Deppe’s so much. I’d forgotten the cruelty of forcing it out of business and then not even using the land I’m a vegan for health reasons now at almost 64, but those hot dogs remain one of my best taste memories. And the root beer was the best. Many happy hours in the arcade that gave my parents a break and time to do what I called making googoo eyes at each other. I wish I’d known them I’d only have my dad until I was 15. I might’ve been less of a brat.