Queens is dotted with minuscule cemeteries, some still existing, some as dead as the people who were buried within, whose remains are blown in the breeze now. Corona used to have a small cemetery on Alstyne Avenue that is long forgotten. TheBunn Cemetery on 46th Avenue and 165th Street in Flushing was recently rededicated after being cemented over by Robert Moses in the 1930s. Some, such as the Bayside Acacia Cemetery in Ozone Park, have become overgrown with weeds and neglect. Some, like the Brinkerhoff Cemetery, on 182nd Street in Fresh Meadows, are the centers of a tug of war between developers and preservationists.

Woodside and Elmhurst, Queens were home to the Moore family, the family that gave rise to Clement Clarke Moore, to whom the famed poem The Night Before Christmas is credited. Clement was the great-great-great grandson of Reverend John Moore, who became the first minister in the town of Middleburg (today’s Elmhurst) in 1656. His son, Captain Samuel Moore, built a house near today’s Broadway and 83rd Street, today the site of the Moore Homestead Park; Samuel Moore Jr. built a farmhouse near 31st Avenue and 54th Street in 1701 (demolished about 1900) and owned about 100 acres of surrounding woodland in the 18th Century. Family descendant Nathaniel Moore, Jr. stipulated in his 1827 will that his real estate on either side of Bowery Bay Road (today’s 51st street) be sold after his death, with the exception of the family burial ground, located today on the west side of 54th Street between 31st and 32nd Avenues.

The cemetery was established by 1733 (the date of the earliest known burial) and has been known as the Moore-Jackson Cemetery since John Jackson married into the family and added to the cemetery’s acreage. He was, however, buried in the churchyard of St. James Episcopal Church on Broadway in Elmhurst. The last interment in the cemetery was in 1867. 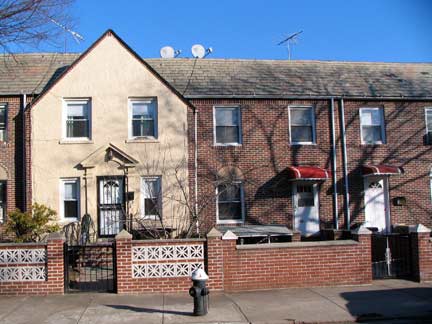 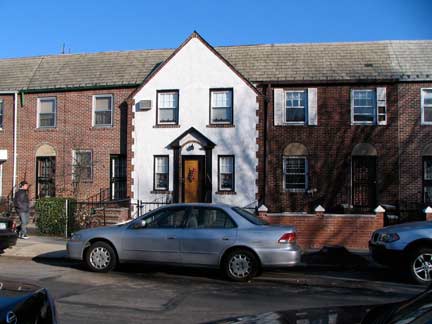 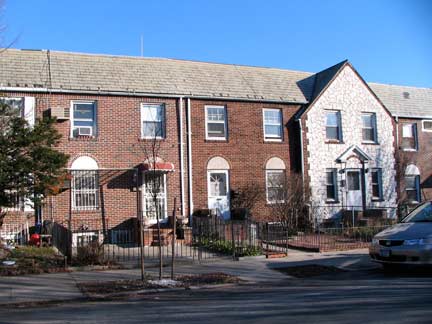 54th Street north of Northern Boulevard. The quiet street, formerly numbered 2nd Street before the Queens Topographical Bureau adopted one set of street numbering for Queens beginning in 1915, gives no sign that a historic cemetery can be found just to the north. These handsome attached brick houses appear to have been built in the 1920s. 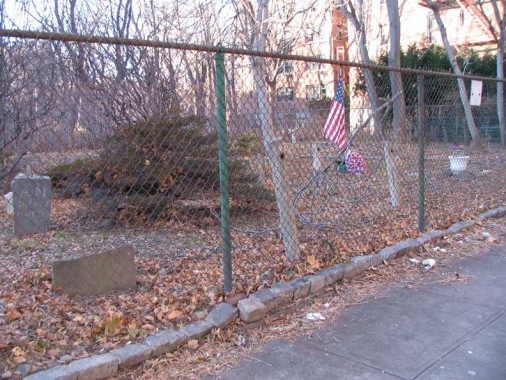 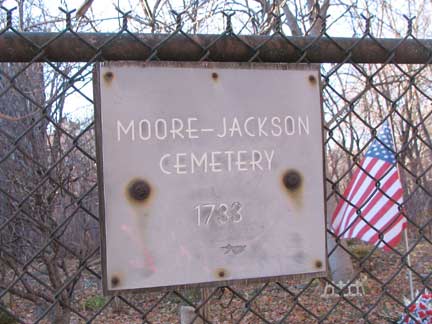 Then, once you’re past 32nd Avenue, there it is, an open area behind a chain link fence, a few gravestones poking up from the barren winter ground, marked by a rusted sign that has been here a long time. This is more than most neglected cemeteries in Queens (and also Staten Island) get; the Brinkerhoff Cemetery is simply an open area of woods, while the Cornell Cemetery in Far Rockaway is completely surounded by private property and is inaccessible to the public.

Moore-Jackson Cemetery’s condition has waxed and waned over the centuries. By the 1910s, Nathaniel Moore’s dictum that it not be sold was holding firm, but the burial ground had become a weed-filled dump.

The Queens Topographical Bureau surveyed the cemetery in 1919 and was able to locate 42 identifiable monuments, which were inscribed on a survey map that you can find reproduced in Woodside: A Historical Perspective by Catherine Gregory (Woodside on the Move, 1994). When construction of the houses you see above began in 1924 the cemetery was used as a rubbish dump. The NYC Department of Health ordered it cleaned of weeds and litter, and by then it was so overgrown that workers were amazed to discover headstones within. The chain link fence was erected in 1956, but the cemetery continued to be plagued by neglect at times. By the 1990s a more concerted effort was made and the cemetery’s condition has stabilized. 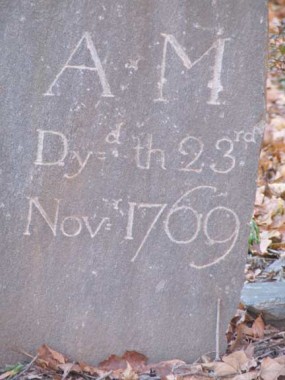 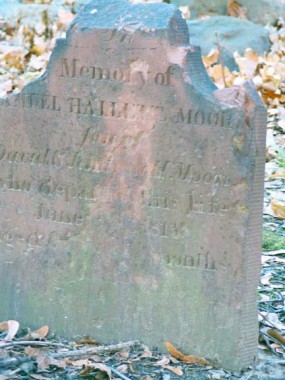 There are just a handful of monuments remaining of the 42 that the topographical survey found in 1919, and most are in the back (the 51st Street side, out of range of my telephoto. But a couple do stand out, including Augustine Moore’s well-preserved 1769 stone which is right in the front. “x” was occasionally used to separate initials in this era. Records show that he was the son of Samuel Moore, Jr, and died at age 17. On the right is Samuel Hallett Moore’s stone, which reads: In memory of Samuel Hallett Moore, son of David & Jemima H. Moore, who departed this life June 26th, 1813 aged 23 years, 5 months & 15 days. 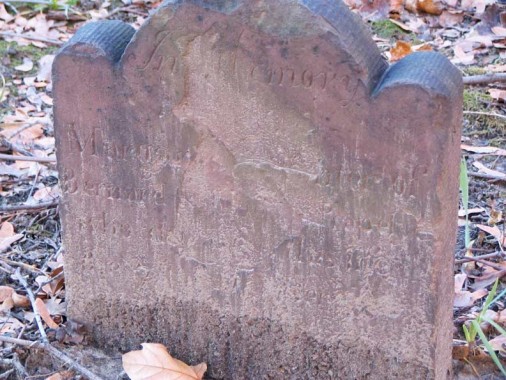 This one is especially tough to make out; it was apparently relocated from the back of the cemetery, which is where the QTB survey placed it. In any case, according to the list of gravestone inscriptions in Gregory’s book, it reads: In memory of Margaret, daughter of Bernard and Deborah Rapelye, who departed this life the 7th of October, 1790, aged one year and 11 months.

Love this!! So much history on such a small plot of land! Sad stories of early death and rememberance…..

it’s a Shame about the condition of these cemeteries.

Incredibly interesting! But I agree with Andrew. I wonder… what organizations are in place today that are responsible for the grounds of these cemeteries? Any non-profit organizations out there taking an active role in maintaining them?

i have recently found out that my ancestors are buried here. Planning to visit in March and curious as to who can allow me access of the cemetery. Am interested in possibly making arrangements to have it cleaned and kept up in the future. Any suggestions are welcomed.

Susan,
I just realized this cemetery was still there and overgrown. I haven’t seen it since I was a kid. If you find out what can be done to preserve it and clean it up, please do not hesitate to contact me to help. Good Luck.
Rosemarie

p.s. you may want to find out which community board is responsible for that area.

A blast from the past for sure. I walked by that cemetery thousands of times growing up. We lived in the Woodside Houses. Great job preserving all that NYC history via this website.

I grew up across the street from here. In 19072-3 there was a fellow who tried to clean it up and make it nice . He did claim that Lewis Carrolls father was buried there. Or someone of that note. It is in a bad position between the housing project and the apt. buildings about it. I belioeve the article was in the News or the old long island press.

I just found this on a stroll through the neighborhood. At dusk in summertime, the place is filled with fireflies.

Susan – someone has been clearing the cemetery and it has landmark status. They even have benches put in there now. It is open to the public on Saturdays 9 A.M. to midnight.

Susan – someone has been clearing it out for awhile now and it is a landmark. They have benches in there now as well. It is open to the public on Saturdays 9 A.M. to midnight.

Just to add on here, the cemetery is now open on Thursday and Saturdays from 9am-noon (not midnight), weather permitting from May-late Fall. I am one of the organizers of the Moore Jackson Revitalization Project. We are a volunteer-led community group who has been responsible for cleaning out the space, helping restore it, and ensuring we can continue to share the history of this space. We have also worked on recreating the farmhouse area along the 51st street side with a community garden and gathering space. The cemetery remains preserved and protected. Check us at on Facebook/IG @moorejacksoncemetery and our official website, moorejacksoncemetery.org for updates and we welcome visitors to come by to visit during Open Hours.

I lived in the Projects across the street,at 50-33 Broadway, from about 1954 till 1961 I would run through the Cemetery every night to go to what we called a Candy Store that was on the corner next to Key Food to get my Father the News Paper. There was nothing but weeds and it was wide open, it says above that the fence was installed in 1956 but I don’t remember it, I didn’t have any fence in my way to the store. The way I went to the store was from 51 St and the 31 Ave side of the Cemetery, I don’t remember any Graves that way. As kids we knew that someone Buried there had something to do with The Night Before Christmas. It is nice to see that after all these years that they are taking care of this important site.