Sometimes, NYC history can be preserved in the unlikeliest of ways and in the most unusual places. Take a large mural along East 15th Street in the shadow of the BMT Brighton line (B, Q) just north of Sheepshead Bay Road. The mural, entitled “Sheepshead Bay’s Historic Future,” depicts Emmons Avenue as it was in 1994 and how the artist, Faith Palmer-Persen (probably with the camera in the mural), apparently predicted the ways it would evolve. The mural was sponsored by the Bay Improvement Group.

The above image depicts Lundy Brothers Restaurant, for decades Sheepshead Bay’s most notable seafood restaurant. It was founded in 1907 by Frederick William Irving Lundy (for years the restaurant was emblazoned with the intials “F.W.I.L.”) and operated out of a shack on stilts over the bay until 1938, when the eatery was forced to move when the city shored up the bulkhead and widened Emmons Avenue. Lundy’s then built the familiar Mission-style restaurant at the corner of Ocean and Emmons where it ran for the next 39 years, until 1977, the death of the founder. The building languished as a ruin for about 20 years until the Tam Restaurant Group revived the Lundy’s name in 1997 and rehabilitated the space, but the fare was criticized as not up to the standards of the restaurant’s previous incarnation, and it closed once again in 2007. New owners soon after began converting it to a grocery and began altering the Spanish-style facade — which brought on some controversy since it was landmarked in 1989. 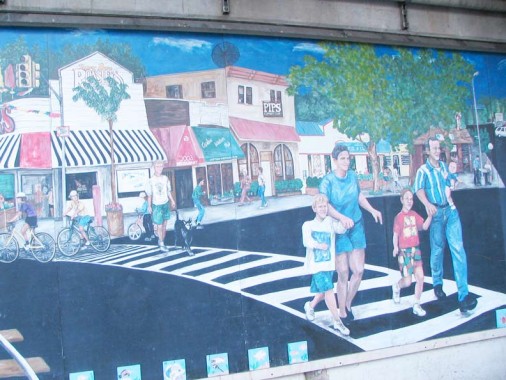 Palmer-Persen (I keep thinking Parker Posey) also depicted the future of Emmons Avenue still with a Pip’s Comedy Club, and I suppose in 1994 that was a reasonable proposition.

Pips is the trial by fire, the gamut, the comedians’ hazing ritual since 1965, and the oldest still-cookin’ comedy club in the United States. Bill Cosby, Robert Klein, Andrew Dice Clay, George Carlin and many others either began their stand-up careers here or performed here during their formative years to revisit and refresh at Brooklyn’s comedy boot camp. The unspoken motto of the place seems to be: if you can play at Pips, you can play anywhere. “Pips,” Joe Gilford, Brooklyn: A State of Mind, 2001 Workman

Oddly, Pips, 2005 Emmons Avenue, closed for good after a brief revival after its purchase by comic Joey Gay in 2005. 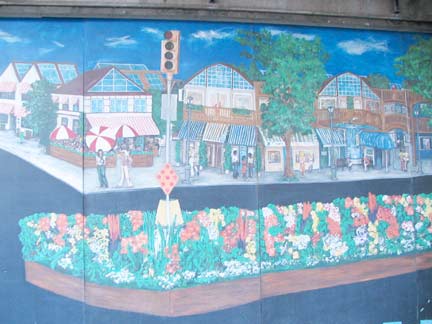 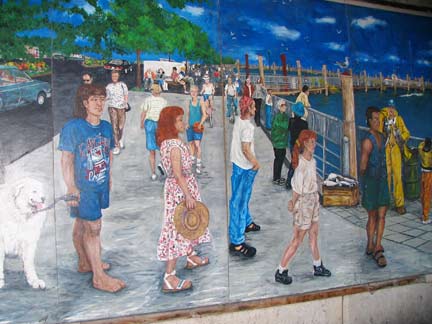 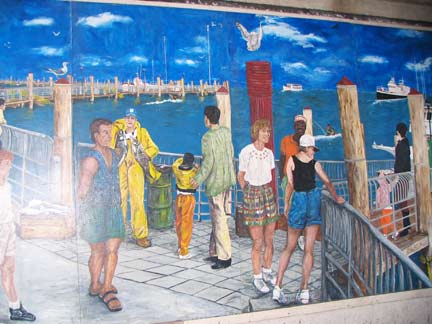 In summer, the south side of Emmons Avenue is alive with fishing boats displaying the day’s catch, as well as casino and pleasure boats.

The flowered center mall that Palmer-Persen envisioned has not yet arrived; the space around the center stripe is used for parking — a situation somewhat unique in Brooklyn. 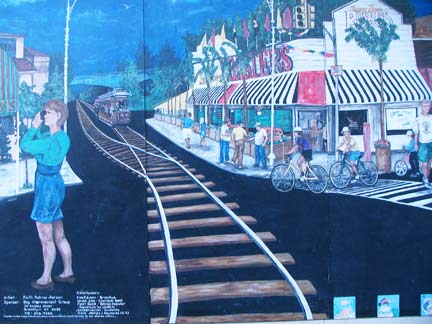 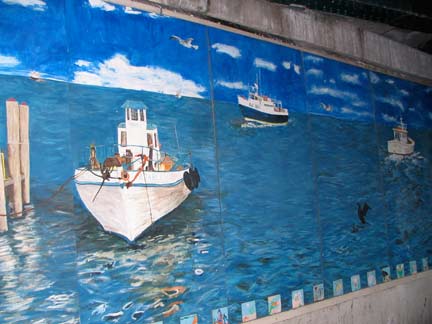 Here, she depicts the B49 trolley on Ocean Avenue, a part of Sheepshead Bay’s past since the 1940s, and at right, Sheepshead Bay itself, which is not the vast expanse that it seems here. 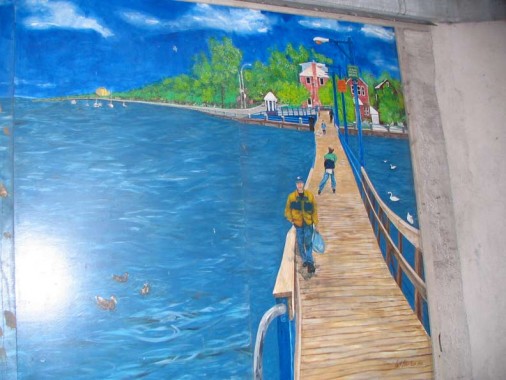 The Ocean Avenue Bridge, a rickety wood bridge that spans the bay and connects Sheepshead Bay with Manhattan Beach, is one of Brooklyn’s treasures (if it isn’t landmarked, it should be). It is actually one block west of Ocean Avenue. Railroad magnate Austin Corbin built the first such bridge in the 1880s and the tradition continues; this bridge is about 4-5 decades old. It is surprisingly sturdy (more so than shown here). When you cross the bridge, you can see one of two remaining guardhouses; Corbin maintained Manhattan Beach, and its luxury hotels, as an exclusive, Seagate-like province in his heyday.

END OF A CLASSIC STOPLIGHT

It truly was a sad day in Brooklyn, when Mr. Lundy died. The national news at the time of Lundy’s death was that Mr. Lundy’s lover Ciro Autorino of 12 years tried to steal the $11 million dollar estate by forging the Lundy will. It was long court battle because Autorino had Lundy’s love and trust but Ciro did betray him in the end, and did end up in prison for 5 years. Mr. Autorino almost got away with it.