I have been a frequent visitor to what I call The Dead Pool, a bend in the Arthur Kill, the waterway separating the west and south of Staten Island from New Jersey. It is located at about Arthur Kill Road and Rossville Avenue in the formerly dying town of Rossville, which has since been revitalized by acre upon acre of cookie cutter tract housing.

Founded in the 1950s by Arthur Witte Jr., the yard sits on a desolate stretch of land at the junction of Arthur Kill Road and Rossville Avenue. Once described by the New York Times as an accidental marine museum,” the Witte Marine Scrap Yard accumulated far more vessels than it could dismember, and the boats quickly piled up. Arthur Witte intentionally stored the vast collection of ships for parts, but the wrecks became a habitat to teeming colonies of underwater fauna. A change in environmental law mandated that these eco-systems be untouched and the hulks endured. Over 400 ships inhabit the yard, now known as the Don John Iron and Metal Scrap Processing Facility.

The junkyard is home to one of the largest collections of historic boats in the United States and has attracted a deluge of maritime historians from across the country. Some of these craft have tales as gripping as the metropolis of Manhattan itself. The Free Library

Vessels from all decades of the 20th Century lie in a state of decomposition and rust at this scrapyard at Arthur Kill Road and Rossville Avenue. Most are tugs or cargo ships. The former piers have collapsed and are for the most part unpassable; these wrecks are officially located in the Witte Scrapyard and are off limits to the public, which hasn’t stopped dozens if not hundreds of urban explorers and gawkers from wandering out to these hulks and snapping away. One of the most accomplished of these photographers has been Sean O’Boyle, whose black and white pictures of these ghost vessels have been iconic. I last visited it in February 2004.

In 2010, the late Bernard Ente passed through and his pictures can be viewed on this page. 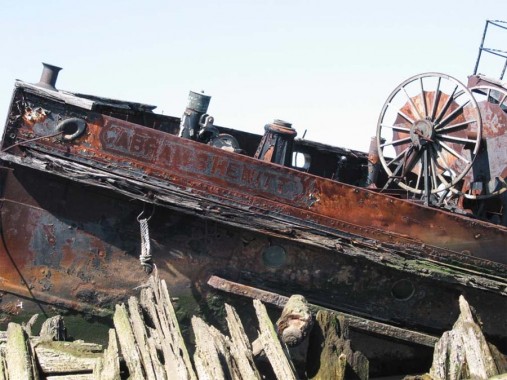 One of the rusting hulks, er, retired vessels is the fireboat Abram S. Hewitt, which was in active service from 1903-1958. The fireboat, named for NYC mayor Abram Stevens Hewitt (1822-1903) was built by New York Shipbuilding in Camden, NJ and launched the year the mayor died; she served in the NYC fireboat fleet until 1958. It was the last coal-burning fireboat in operation.

The Hewitt, a coal-fired tug …was associated with the deadliest peacetime maritime disaster in US history – the burning of the General Slocum. Over 1000 lives perished on the blazing liner, which was stocked with rotten life jackets.

The Hewitt served as a mobile command vessel during the blaze. The ship transported NYC Fire Chief Edward F. Croker from the East 67th Street Pier to the scene of the conflagration. Retired to the Witte yard in 1958, the Abram S. Hewitt was the last coal-burning fireboat in the New York Fire Department’s fleet. Unfortunately, the Hewitt’s service is largely unknown. The Free Library

Rossville was once known as Blazing Star, after a roadhouse or tavern on Arthur Kill Road (Bulls Head, a couple of miles away, got its name in the same manner). a remnant of the old name can be found in Blazing Star, or Rossville Cemetery, on the right side of Arthur Kill Road just before you get to Rossville Avenue (if you are driving past, blink and you’ll miss it). The cemetery was initiated in the mid-1750s, at least 20 years before the USA was an independent country. A look at the tombstones will reveal a Staten Island gazeteer, a typography exhibit, and an orthography lesson. The best time to visit is in the moning, when light illuminates the front of the stones, which face east. Bernard Ente was there one recent morning. 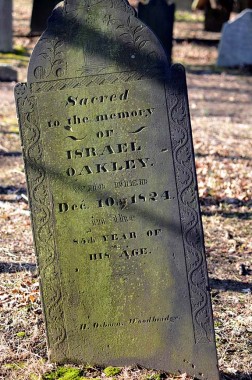 Bodoni-esque lettering on the stone of Israel Oakley. Beautiful vines-and leaves carvings on both sides of the tombstone and an altar-like figure at the top. A Masonic symbol, perhaps? At the bottom is a curious nscription: H. Osborn, Woodbridge. Likely the stonecarver, from the nearby township in New Jersey across the mighty Arthur Kill. 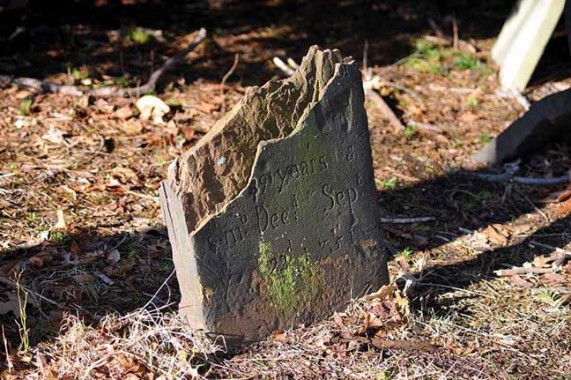 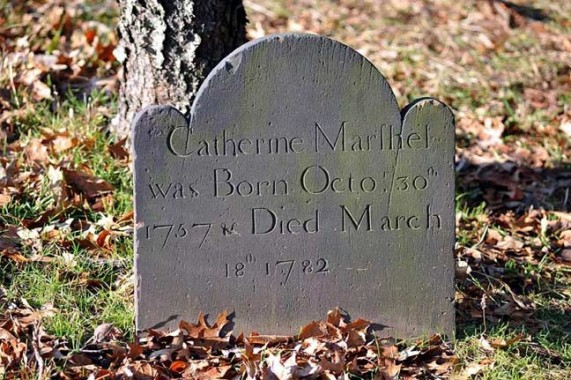 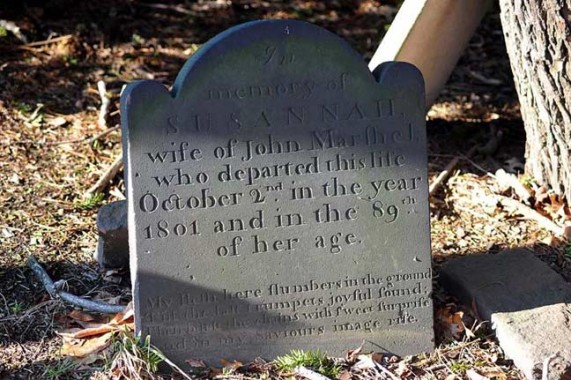 Susanna Marshall. The inscription says: My flesh here slumbers in the ground Till the last trumpet’s jofyul sound; Then burst the chains with sweet surprise And in my Saviour’s image rise.

Until about 1800 printed English used the ‘long s’ which looked like a small f without the crossbar. The regular “s” was used for an intial capital (Saviour’s) and when it ended a word (chains, Saviour’s). Soon after, the small s we recognize took over, though the double s in Geman still has a letter that’s orthographically related to the long s. Other odd letter symbols in English include the capital Y in things like Ye Olde Taverne, which is properly pronounced “The Old Tavern” as the Y is an orthographic remnant of the thorn symbol, which represented the ‘th’ sound. The thorn vanished in the medieval period. Also, the X in Xmas is not an X but rather the Greek letter Chi, the first letter in the Greek word for Christ, which resembles our X.

Centuries from now, our crumbling headstones will be similarly picked over.

Hello,
Is it possible to obtain a good quality image of that showing the fireboat Abram S. Hewitt?
Thank you.
Wayne Mutza

I was just here the other day. Trying to get the few pics i was able to take before getting yelled at uploaded…

My phone erased all my pictures just now randomly. Nevermind

I am curious about the tavern, “The Blazing Star”. One of my ancestors, John Mesereau and his brother Joshua reportedly kept the tavern during the Revolutionary War. I would like to see if there is any information out there about the tavern, what it looked like, where it was located, what they may have offered, who frequented it etc. Please contact me – am interested in piecing together some family history. Thank you.

[…] HarborLAB brought CUNY LaGuardia Community College photography students to New York City’s own Graveyard of Ships, a place where lore grows with rust and spiderwebs. Officially the yard of the Don John Iron Iron and Metal Scrap Facility (formerly Witte Marine Scrap Yard), this collection of late 19th-through-20th century working harbor boats has become a habitat (above for nesting birds, including osprey, and all manner of fish below), place of reflection, and industrial history museum. For more information, enjoy Forgotten New York’s masterful write up. […]

The General Slocum was not a liner. It was a ferry/excursion boat which was a fixture around New York harbor for a couple of decades. The Captain didn’t believe it when he was told there was a fire aboard, and the actions he took fanned the flames and made the disaster worse. Whole families died in the disaster.

I discovered this randomly on google earth.

Wayne Mutza, n Contact me about the HEWITT. AHRENSJIM@HOTMAIL.COM