At one time, railroad stations, especially terminals in large cities, were thought of as magnificent gateways or portals to new realms, welcoming travelers from far and wide to places they had only read about in books, or places of inspiration for commuters from far-off locales: though their work may be drudgery, they could aspire to something much better, or hope to attain a life better than the one they were leading now. You need to go no further than Grand Central Terminal, once NYC’s main connection point to the rest of the country (It has ceded this responsibility to the airports, which have their own set of troubles after a similar phase of wonder and delight) for an example of this philosophy. The formerly magnificent Penn Station, which stood from 1910-1963, was conceived in similar tones. 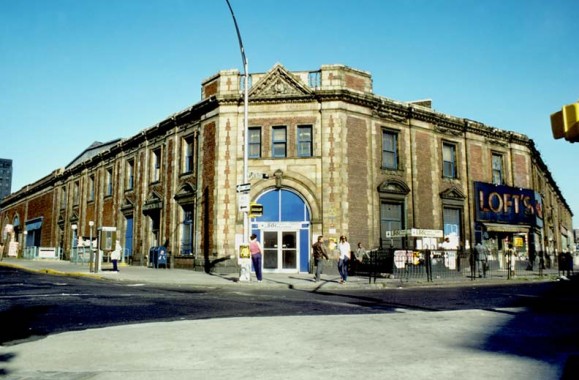 Let Us Take You Back to, let’s see, I’d say 1971 or 1972. This is what the corner of Flatbush Avenue and Hanson Place looked like back then, with the formerly magnificent but clearly time-ravaged Flatbush Avenue Long Island Rail Road terminal. Though this edifice was completed in 1907, it was not the first LIRR terminal building on the site. From the mid-1840s through about 1860 trains from Long Island actually terminated at the western end of Atlantic Avenue at the beginnings of the East River. Steam trains coursed through one of the country’s first railroad tunnels between Court Street and about Hicks.

From 1861-1877 steam trains were banned in Brooklyn, making swift train traffic impossible at the time and Brooklyn plunged into a depression: Long Island City became the city’s main East River RR terminal, a position it would hold until 1910 when Pennsylvania station opened in mid-Manhattan. Horsecars, a much slower mode of transport, replaced steam power in those years; a terminal was erected at Flatbush and Hanson to accommodate steam service when it was resumed. This terminal building is somewhat mysterious, as no exterior photographs of it seem to exist. Historian Ron Ziel included an interior photo in his landmark work, Victorian Stations of the Long Island Rail Road.

When the line from Brooklyn to Jamaica was electrified in 1905, the terminal building you see here was constructed. It was no great beauty like its cousin in mid-Manhattan, but it was built with contrasting brickwork, terra cotta highlights, and boasted a cathedral-esque two-story high waiting room. Art Hunecke, whose online LIRR collection Arrts Arrchives is one of the great treasures of the internet, has collected over a dozen photos of the 1907 Flatbush Avenue terminal, making the site its chief legacy. 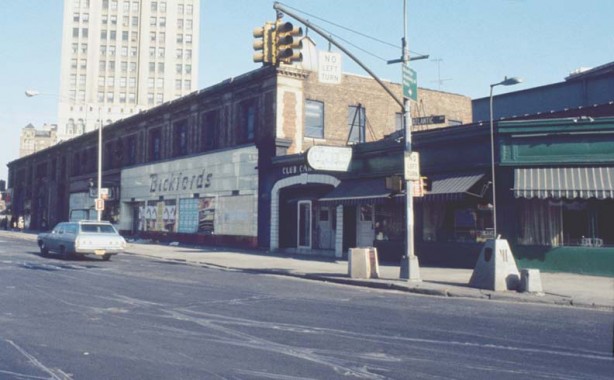 What do I remember of the LIRR Flatbush Avenue terminal? Till I began working in Long Island in 1992 I didn’t use the LIRR much. This is the version of it I remember going past on the B63 bus at Flatbush and Atlantic — the Bickfords that had been long abandoned by 1972, and the adjoining Club Car Bar. This entire tableau has now been replaced by the Atlantic Terminal shops that opened in 2004. But that’s not the entire story.

The Flatbush Avenue terminal died a slow, agonizing death over several years between 1972 and 1988. The waiting room, interior shops and lobby had been closed by the early 1980s, and when you entered the building, you were hustled down to the basement, closed off by a metal partition, where the LIRR ticket office and LIRR tracks, as well as the Atlantic Avenue IRT station, were located. The building itself was pulled down in 1988, leaving a few fleeting bricks on Hanson Place, as well as a gargantuan hole in the ground for the next 15 years or so, before the Atlantic Terminal shops, which included a new LIRR ground lever ticket office, were built from 2000-2004. The corner property was left unfinished until seemingly endless construction on the new Flatbush Avenue terminal began in 2007.

The north side of Atlantic Avenue, now dominated by stores and restaurants, was dominated by slaughterhouses and meat cutting plants between Fort Greene Place and S. Portland Avenue when I was going to school nearby in the early to mid-70s. Sometimes I would sidle past meathooks swinging huge haunches of meat when I chose to walk instead of taking the bus. This, Brooklyn’s meatpacking district, has utterly disappeared as if it were never there. 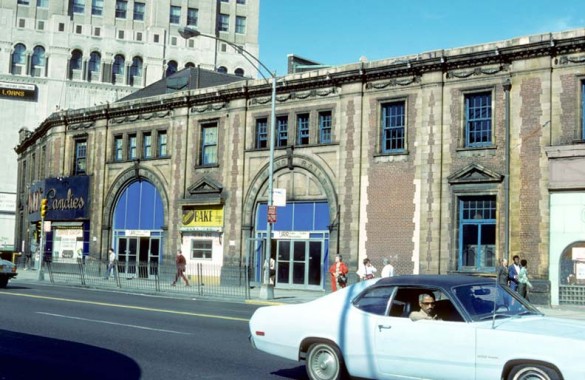 A look at the LIRR terminal in the early 1970s. Loft’s, once a prominent candy store chain, dominated the frontage at Hanson Place along with a bakery. The arched entrances in the front by now have been cheapened with vinyl or plastic, as well as anachronistic signage in sanserif Standard type. Name That Car in the front! The eternal Willie, the Williamsburg(h) Bank Building, looms in the background. See that ‘scoreboard’ at left? I depended on it for the time and temperature every day while waiting for the B63 to get me back to Bay Ridge. 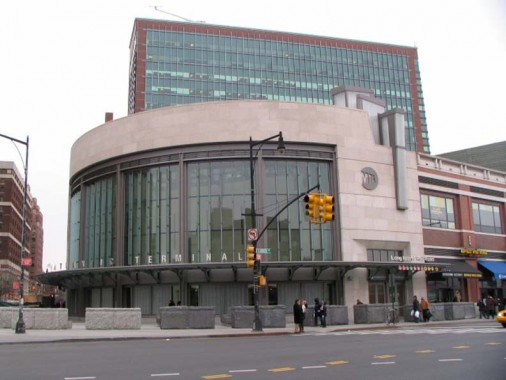 The payoff for waiting between 1988 and 2010 for a new LIRR Flatbush Avenue terminal, is, well, this thing, which has all the charm of George Orwell’s Ministry of Love (for those of you who haven’t read 1984, the torture chamber). Admittedly, I was by on a day of gun metal sky, when the temperature never cracked fifteen Fahrenheit. But even on a merry day in May, this thing must be completely charm-free as the railroad gateway to Brooklyn. 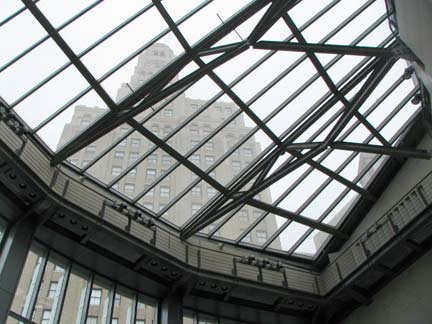 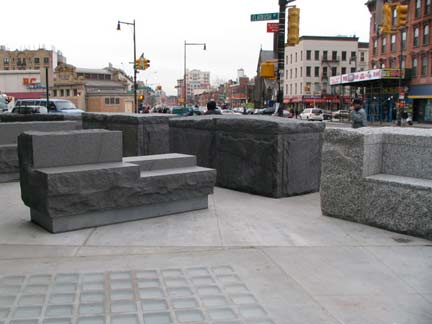 A glimpse of far more invigorating architecture, executed with panache. A clutch of anti-terrorism bollards, which resemble coffins on the street side, completely obscures the Flatbush Avenue side, separating it from the immediate neighborhood. In the Brooklyn Paper, editor Gersh Kuntzman writes:

Train stations are supposed to be about magic and adventure, not paranoia and fear. They’re supposed to inspire Americans to explore and look beyond narrow parochialism, not encourage it. Instead, we get a train station that’s a fortress — designed in a style that architectural critic Nicolai Ouroussoff calls “21st-century medievalism.” It’s not a landmark of civic design, to paraphrase Ouroussoff again, but a line of civic defense.

The New Terminal looks a heckuva lot better that the old one did. I worked near the terminal in 2002 and it did look bad back then. No semblance that there was a major train station below the street back then just a bunch of stairways leading down into the ground.

Spent many a time there in the seventies traveling out to long guyland. It sure was a dump, but I prefered the dumpiness to the antiseptic crap! can remember getting mexican jumping beans out of the quarter vending machines there!

I like the new station. I can’t compare it to the old one because I was never inside, but the the new Atlantic Terminal is airy, spacious and very convenient. It also has more stores than the old one seemed to, correct me if i’m wrong. BTW, the car looks more like the Duster’s brother the Dodge Demon; again, I could be wrong!

The last nod to the meatpacking days was a Western Beef that used to be where the Pathmark/Marshalls and everything else is now. They closed sometime in the Nineties…

Thanks for these pictures, which I found when trying to orient myself to the new Barclays Arena. I remember the original LIRR station in the ‘fifties, when I’d get down there on the IRT from my home station (Church Ave.) to visit a model railroad shop that was across Flatbush Ave. Even in the ‘fifties the terminal was pretty seedy, as I recall; maybe you’re a little too harsh on the new one. However, it might have been nice to have been able to incorporate that intimate nineteenth-century, yellow-stone facade into a new terminal; too bad modern ideas of architectural preservation hadn’t yet been adopted when the new terminal was built. At least it’s in the same place, and at least it has the curvature at the intersection–sort of like the old one.

I commuted to the Atlantic/Flatbush LIRR station daily between 1964 and 1968, while going to high school. It was seedy back then, but I prefer it to the new sterile structure.