THANK YOU FOR YOUR SERVICE Retired line designations

By the end of June [2010] the V and W trains will be no more. As part of a broad-based budget cutting procedure, the millions-in-arrears MTA, getting little help from the state and federal government, now turns to you, the consumer of its services, and requires payment of higher fares and acceptance of stingier service. This has initially meant the elimination of MTA jobs, but also means drastic cuts such as the elimination of several bus routes, service cuts on your webmaster’s Port Washington LIRR branch, and, of course, a rising fare perhaps as early as 2011. Subway lines are being eliminated as well. Due to the imminent cancellation of two lines, I thought I’d enumerate several other lines, as well as letters, no longer a part of MTA service.

The 5¢ version of subway line designations: The current letter system used by the IND and BMT NYC subway lines has employed since 1932 — when the Independent Subway was created by NYC began operating to compete with the then-privately held IRT and BMT (earlier Brooklyn Rapid Transit, or BRT) it employed the letters A through G to designate various subway lines that traversed the main trunk lines on 6th and 8th Avenues in Manhattan, Fulton Street in Brooklyn, and Queens Boulevard in Queens, as well as the IND Crosstown which operated on Lafayette, Marcy, Union and Manhattan Avenues in Brooklyn, joining the Queens Boulevard line in Queens. The IRT did not employ any number or letter designation when it first began operations in 1904, but began using the numbers 1 through 8 in 1948. The BMT, meanwhile, also used numbered trains from 1 to 16 until about 1960, when the Transit Authority began phasing in letters to replace them.

After 1940 all three subway branches were run by the city, and a 1967 tunnel connection under Chrystie Street just west of the Williamsburg Bridge allowed IND trains to run on BMT lines, and vice versa, thus blurring the delineation between the IND and BMT. Earlier, in 1956, the BMT Culver Line gained a connection with the IND 6th Avenue and Crosstown when a ramp was built connecting the Church and Ditmas Avenue stations on the current F line.

On this FNY page I’ll show you some subway designations (in my memory) no longer in existence. I won’t go back as far as the days when the BMT used numbered lines — that’s too early for me to really remember well, though as late as the 1970s and 1980s I’d still see an errant number show up on BMT rollsigns. All photos on this page come from two excellent subway references: nycsubway.org and Rob Kopolovicz’s excellent subway history pages. 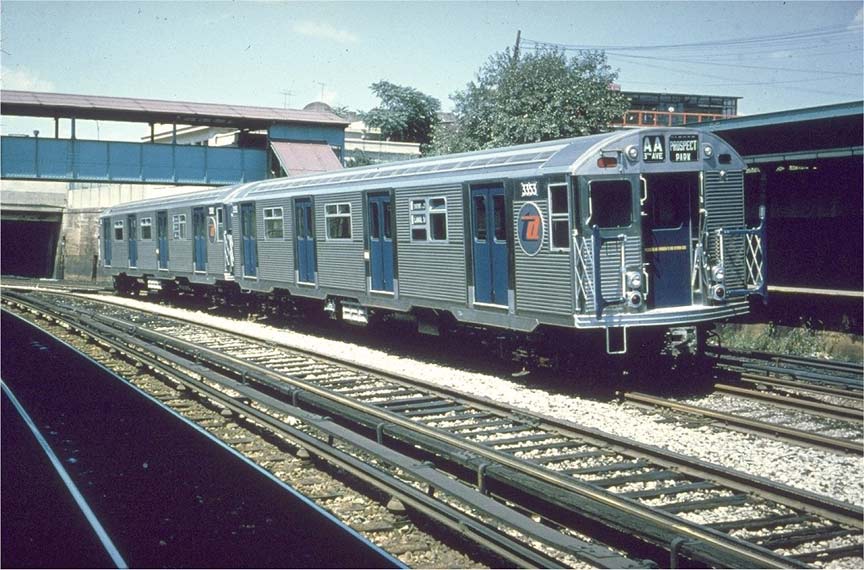 As a rule (but not an exclusive rule) doubled letters signified local operation of the express line, which was designated as a single letter. The A train, immortalized by Billy Strayhorn and Duke Ellington, has always run on the 8th Avenue Line beginning with its inaugural run on September 10, 1932. Its brother line, the double-A, began operations the same day, as a local service until 1986, running from 168th Street to Hudson Terminal (later the World Trade Center) when it was renamed the K train (see below). This AA, and its shiny new R32 trainset, was being tested on the Sea Beach, where the AA usually didn’t go, when photographed. As it happens, Car 3353 can still be visited today as it has found residence at the NYC Transit Museum. 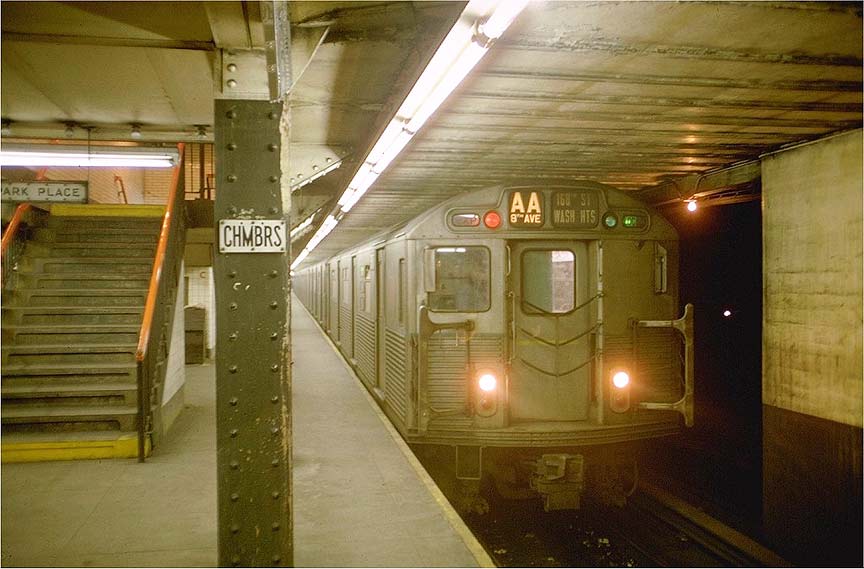 An R38 AA waits at Chambers Street in the late 1960s, just before the graffiti onslaught. Note the original 1930s IND black-on-white enamel signs, and dark gray paint scheme on the pillars. The R32s and R38s were reconfigured in the 1980s to show a digitized readout on the front car, replacing the roll sign; these cars have only been recently retired as of 2010. 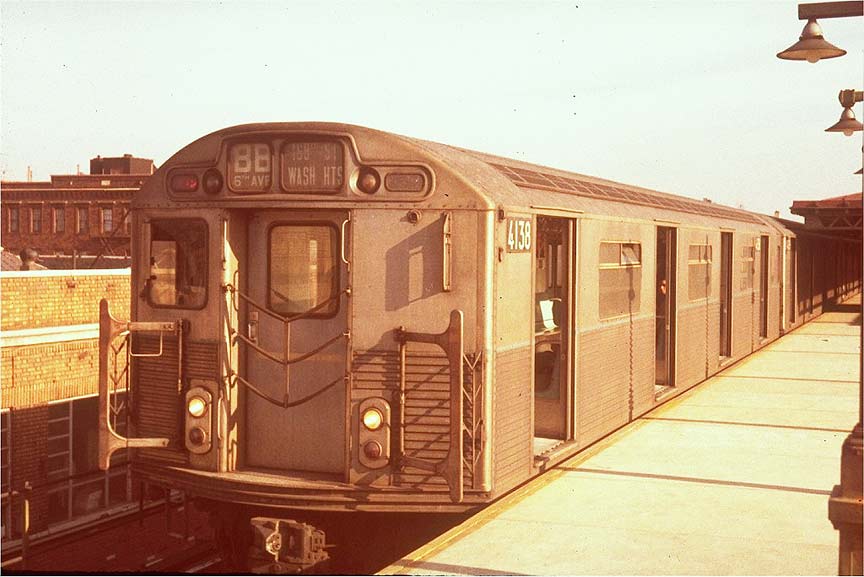 The BB was inaugurated in 1940 as a local service of the D train, on the 6th Avenue Line, running from 168th Street/Washington Heights south to 34th Street. It later took over TT service on the West End Line to Coney Island, with the Chrystie Street connection allowing it to travel on the Manhattan Bridge. It was renamed the B in 1967. Here, an R38 trainset led by car 4138 idles at the center-platformed Bay Parkway station on the West End line. 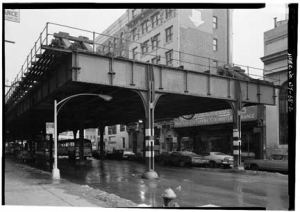 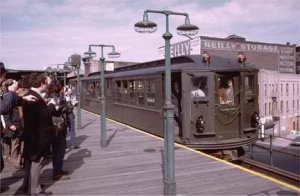 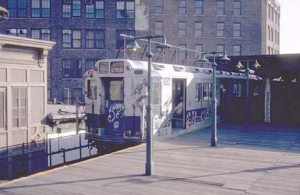 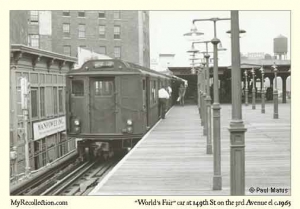 The Transit Authority killed off the Third Avenue El for good on April 28, 1973 when the portion in the Bronx running from the Third Avenue and East 149th Street (The Hub) north along Third, Webster and Gun Hill Roads to the White Plains Road elevated line was closed and the el tracks razed shortly thereafter.

The photos here show the 149th Street platform, and Third Avenue under the el, around the time of the line’s closure. The image top left comes from Greg Christiano’s* excellent Third Avenue El page. The Third Avenue used R-12 and R-14 cars near the end of its run, and before that, classic 1917-1924 Low-V(oltage) cars, one of which is seen in the photo below left.

A little-known aspect of the Bronx Third Avenue El was that it was designated as the #8 train for the last 6 years of its existence, from 1967 to 1973. The cars were never so marked, however, with the roll signs designating it a shuttle service (which it officially was, albeit a lengthy one). Interestingly the IRT never used the numbers on ay signage before the 1940 unification.

Today, the MTA does have a green 8 bullet on its roll signs, as it had contemplated using the number for the #5 rush hour service to 241st Street: it used the 5-diamond instead. The 6-diamond was also a candidate for replacement with 10 and 12, while the 11 is ready to replace the 7-diamond express. None of these changes are expected to take place. The 5-diamond was discontinued in 2005. 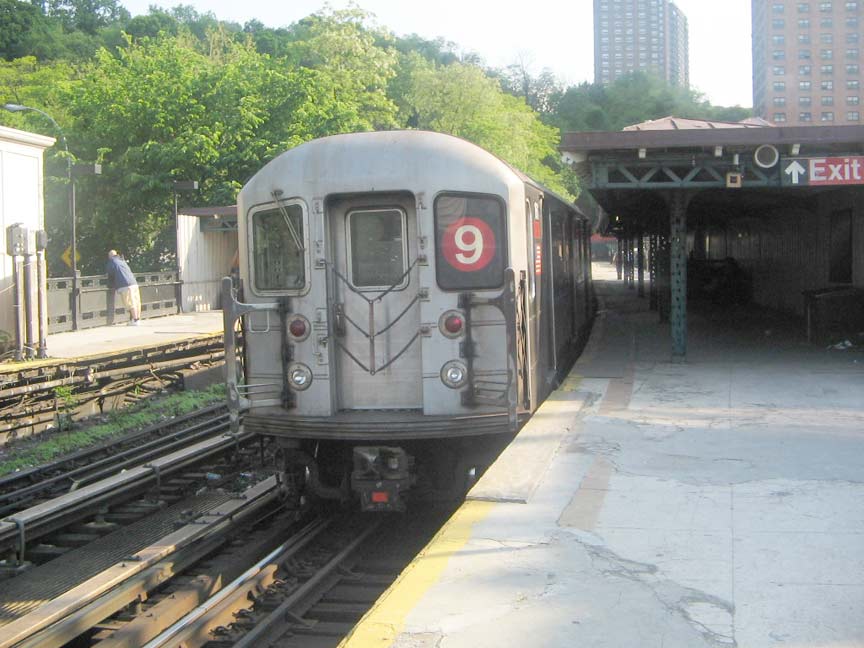 There was a short-lived #9 service, though it wasn’t a separate subway line. It was a skip stop with the #1 train, designed to address tthe lack of express service on the Broadway line from 96th Street north to Van Cortlandt Park.

The #1 and #9 skip stop service was the inspiration for the title of Patti Rothberg‘s 1996 debut CD, Between The 1 and the 9.

All #9 trains employed the R-62 cars seen above, this trainset at the Dyckman Street station looking south. 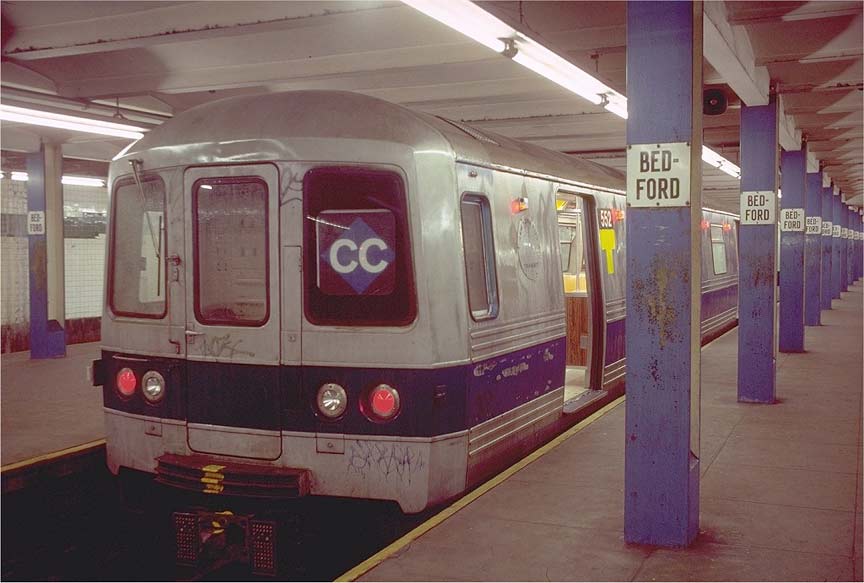 The CC was a venerable local service on the 8th Avenue line, running from 205th Street south to Hudson Terminal beginning on July 1, 1933, changing its northern terminal to Bedford Park Boulevard in the Bronx in the 1940s. The CC became the single C train on May 5, 1986. In 1997 the C’s northern terminal became 168th Street/Washington Heights. It began service east to Euclid Avenue in Cypress Hills, Brooklyn, in 1988. Above, we see an R-46 trainset with a diamond CC sign. The CC sported a diamond when in rush hour service. 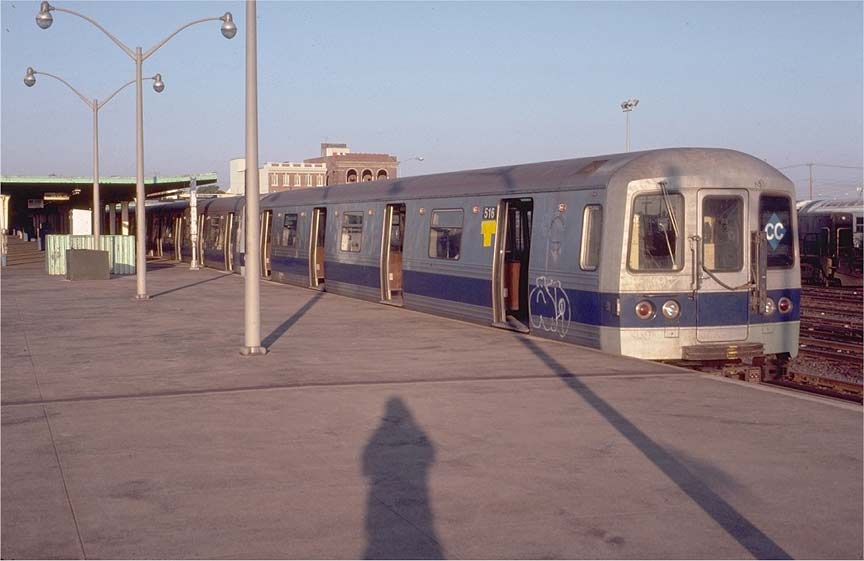 The CC also turned up briefly on the Rockaway Peninsula in the late 1970s, as the HH shuttle from Broad Channel was briefly designated the CC before the HH was brought back. Here is an R46 trainset led by car #516. The R46 cars were introduced beginning in 1974. 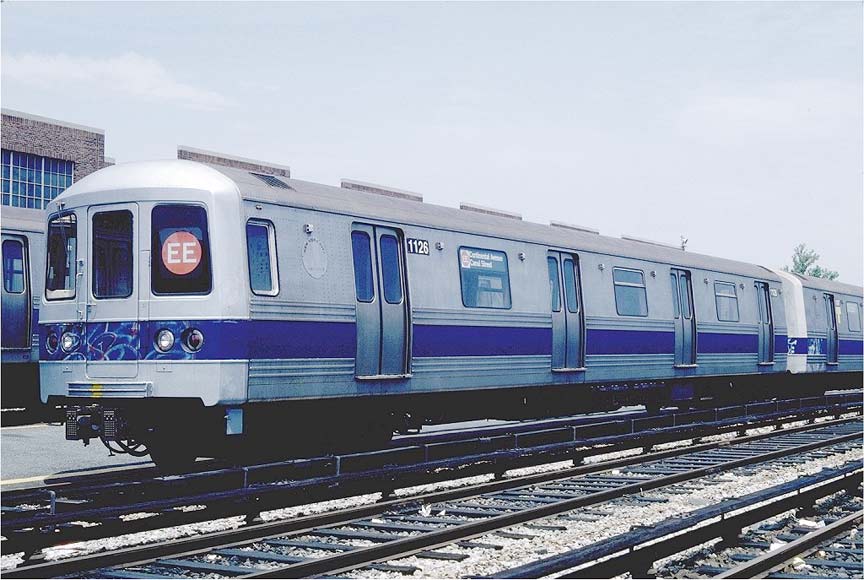 As a BMT 4th Avenue/Broadway rider in the 1970s it disconcerted me somewhat to see a train marked EE plying the route. It was sort of like seeing a rival lording it on your turf; I associated it with the E, which was way over on 8th Avenue, a line I rarely used then. Of course, the EE was named for its association with its cousin the E on Queens Boulevard. In fact it was the MTA’s way of connecting the Queens Boulevard IND line with the Broadway BMT via a track connection in the 60th Street Tunnel. The service was generally between Whitehall Street and Continental Avenue in Forest Hills from 1955-1976, with the route designated the EE from 1967-1976. It was then eliminated since the R and N covered much of the route; the R was rerouted to Continental Avenue (from its old terminal at Ditmars Boulevard) in 1987. IThis photo was taken at Jamaica Yards and it’s an R-46 set led by car #1126. 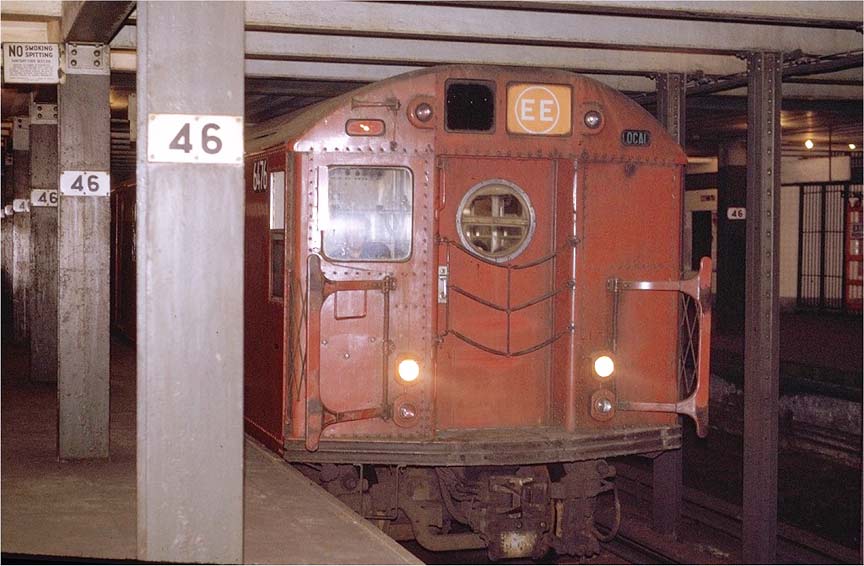 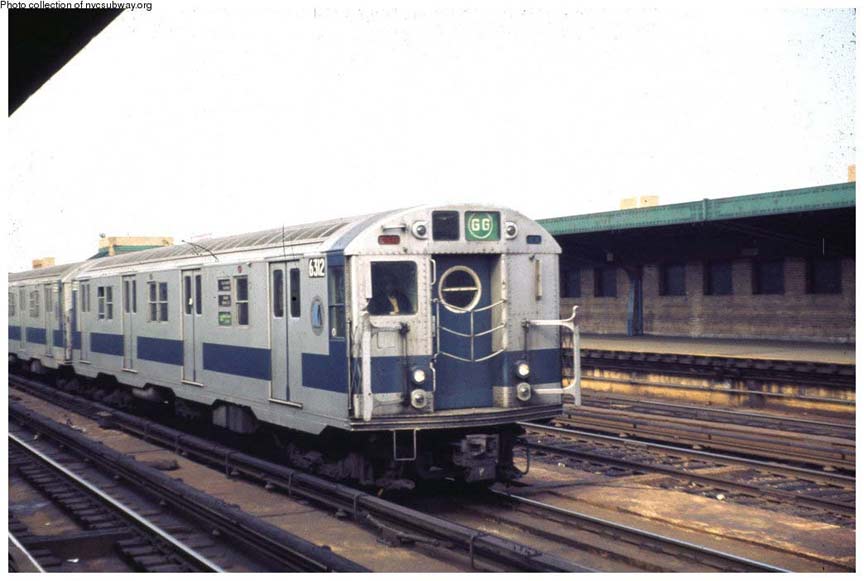 Another R-16 trainset, this one led by car #6312, lays over at the 4th Avenue station before the GG began its run to Queens via the IND Crosstown Line, with the first stop at Smith-9th Street. When I lived in Bay Ridge and had to get to Greenpoint, the GG was always a scene of frustration as I first had to change to the F at Fourth Avenue, ride it one stop to Smith-9th, and then board the GG. That situation has been alleviated just recently, as the MTA has extended the G south to Church Avenue even while preparing to cut it back fulltime to Court Square as the northern terminal, where the MTA’s lone people-mover allows a transfer to the E and for a short time yet in May 2010, the V, at 23rd/Ely Avenue. 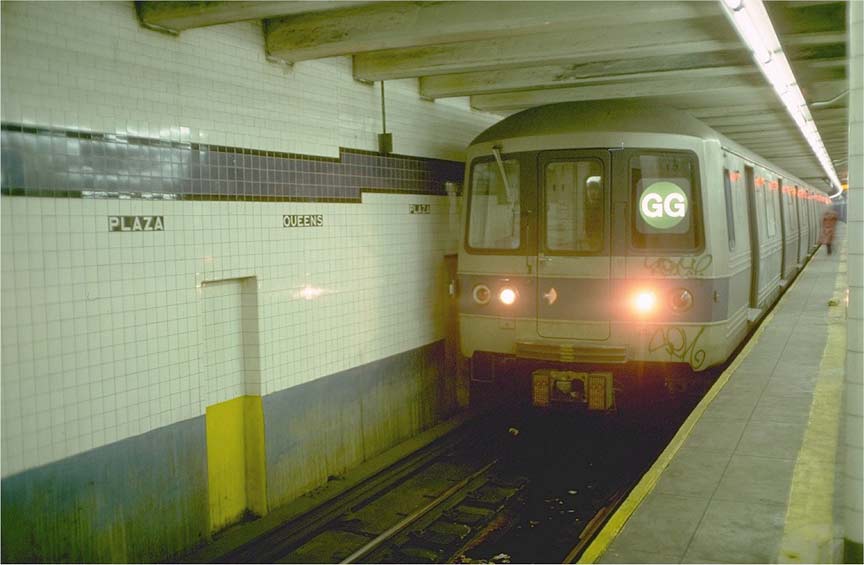 Here’s the GG at Queens Plaza running R-46 cars, a place it will rarely if ever visit after the 2010 changes are implemented and the line is cut back to service between Church Avenue and Court Square. The GG has been a weird subway line indeed since service began between Queens Plaza and Nassau Avenue in Brooklyn on August 19, 1933. No GG has ever ran into Manhattan — doing so would involve some fancy track changes between the Hoyt-Schermerhorn station, where it buddies up with the 8th Avenue Line A and C trains, and Bergen Street, where it encounters the 6th Avenue F. In recent years, as annoying trackwork has interfered with the F, the G, which lost its other G on May 5, 1986, has occasionally been seen on the Culver Line en route to Coney Island. Other than that variation, the G has seen little change in its route — which can’t be said for its brothers in IND, the A through F trains.

G stands for green, and the GG/G’s roll signs have long been green; the IND used green in every one of the line’s stations; and, of course, the line runs under Manhattan Avenue in Greenpoint. This kind of synergy is rarely seen in the subways. 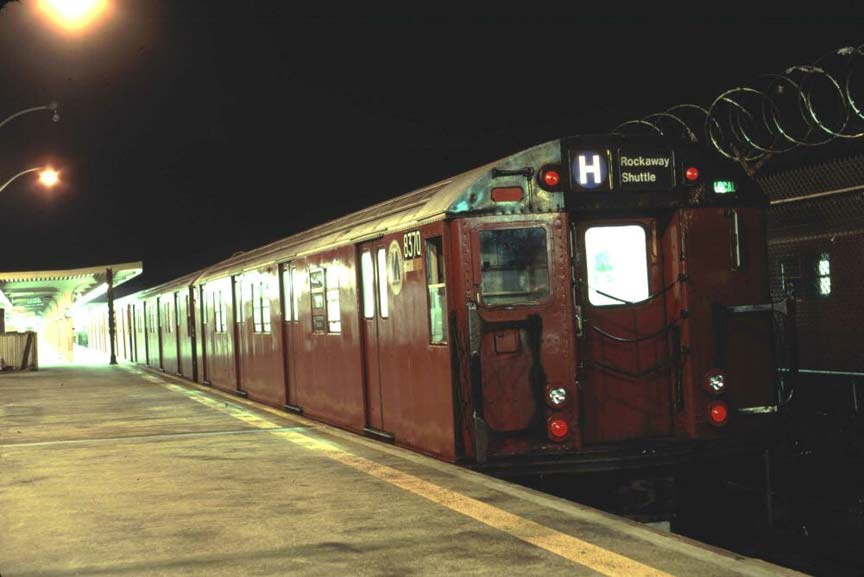 The H/HH designation, which has been used by the MTA off and on for over 50 years, has always confined itself to the outer reaches of Queens between Ozone Park, Broad Channel, and the Rockaway peninsula. The first shuttle bearing the HH moniker began service in 1956, soon after the city refitted old LIRR tracks for subway service.

The HH ran from Euclid Avenue to either Rockaway Park or Mott Avenue in Far Rockaway from 1956-1972. During that time, a double fare was actually in effect at Broad channel: you were nicked for a token on your way in and on your way out! A single fare policy was adopted in 1975.

As we’ve seen above, the HH shuttle was brought back in the late 1970s as the CC, which then changed back to the HH, losing an H on May 5, 1986. The H was finally retired in 1994 when former H trains were designated S for Shuttle.

The HH was also used for the Court Street Shuttle from 1936-1946 from the former Court Street IND station, now used as the MTA Transit Museum, to the Hoyt-Schermerhorn station. The platforms it used are abandoned and unlit, but still intact. 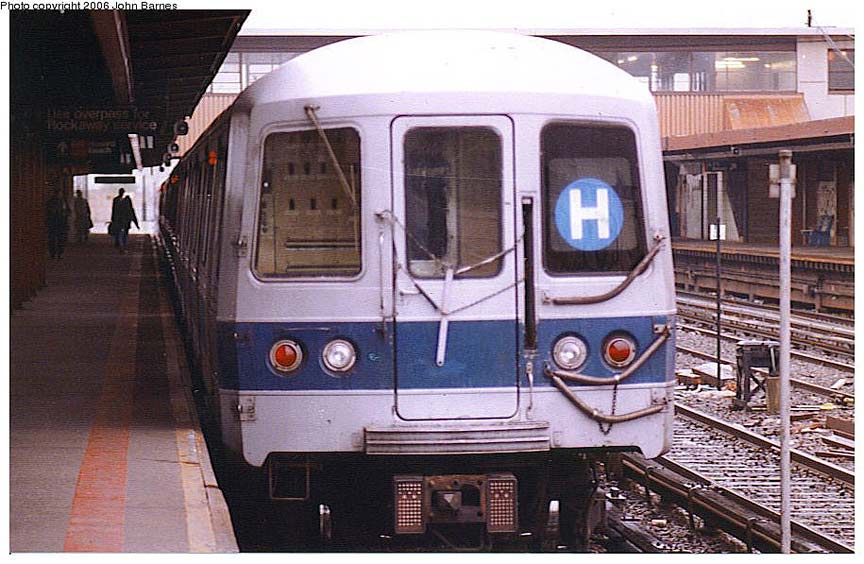 Above, an H waits to cross Jamaica Bay at the Broad Channel station using a set of R-46 cars.

THANK YOU FOR YOUR SERVICE Retired line designations Page 2