Allow me a litle FNY esoterica. (You can argue the whole website is esoterica but I would disagree with you). Over the past few years, the NYC Department of Transportation and the FDNY have been removing fire call boxes (or decommissioning them) in an era of mobile wireless call devices. There has also been a misguided, in my opinion, move toward eliminating the large, orange fire alarm indicator lights (presently oblong-shaped, they used to be globe-shaped) in favor of the “top hat” small indicator lamps mounted right on the lamppost luminaire. This makes them nearly impossible to make out at night, since the bright sodium light nearly drowns out the small red light in the top hat.

There have been a variety of ways to mount the fire alarm indicator lamps. In the castiron lampposts era, the indicator lamp was always attached to the shaft via a special, stylized mast (shown above right). When the legions of cast and wrought iron posts, be they bishop crooks, Corvingtons, Twins etc. had thousands of copies made and installed on NYC streets beginning on the 1980s, these shafts were not reproduced, and the same curved pipes that are used on octagonal posts (see below) were used instead, as on this post at Broadway and 37th Street in Astoria, Queens (left).

The above sampling is the one and only fire alarm mast thathas been newly produced, for a restored Type 6BC Bishop Crook on Warren Street downtown. 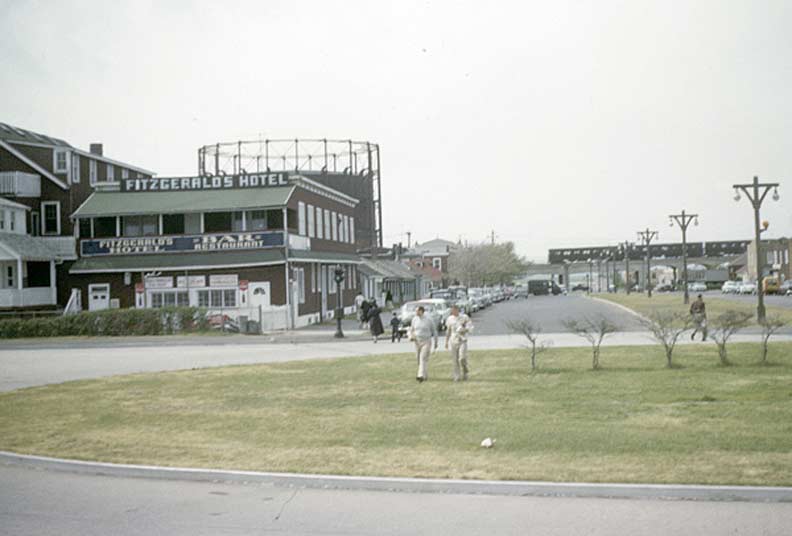 You can barely make it out, but in this picture of Shore Front Parkway and Beach 108th Street on the Rockaway Peninsula, which was lit with a flock of twin Woody lampposts, the first woody has a cast iron fire alarm mast attached to it. The Woodys had no specific fire alarm mast of their own and when they were used on city streets, the then Department of Traffic had to improvise, and so the cast iron ones were pressed into service. If anyone has a better closeup of this, pass it along! Rockaway Memories

These two posts “break the rules” with an apex-mounted alarm light on a cobra-neck post, and a curved mast mounted on a straight-mast post.

This now-ancient Donald Deskey campaigner at 6th Avenue and 72nd Street in Bay Ridge, Brooklyn bears the original oblong fire alarm lamps they were fitted with when first installed in NYC streets between 1958-1964. This particular sample has been battered and weathered over the years and is held in position by tape.

Later Deskey posts were issued their own separate fire alarm light design. Unfortunately these were no better fitting then the last, and many would up also being held in place by tape.