Forgotten NY has always been a bit sparse on Forgotten aspects of the Upper East Side. There has always been apractical side to this, as the Long Island RR brings me into Penn Station, whose various subway lines serve the west side of Manhattan, Upper and Lower. To get to the East Side I have to switch at Woodside to the #7, then change at Grand Central for the #4, 5, 6, the Lexington Avenue lines. Do-able,but extra steps. Regardless, I think I will be spending more time on the East Side despite the subway construction on 2nd Avenue (whoich is being done in tandem with a Long Island RR connection to Grand Central).

While dragging myself through the ungodly heat of the typical NY summer (to me, ungodly is 75 degrees and up) I reached the Treadwell Farm Historic District, which is made of of two blocks of East 61st and 62nd Streets between 2nd and 3rd Avenues.

Members of the Tre(a)dwell family (both spellings appear in documents) figure in two disparate NYC regions. In 1815, Adam Treadwell, a fur merchant , and Stephen Thorne, Jr. purchased land on what later became East 61st and 62nd from the heirs of Peter Van Zandt. Treadwell later bought Thorne’s share from his relatives after Thorne’s death. A younger brother, Seabury Treadwell, owned what is now the Merchant’s House Museum on East 4th Street in the East Village.

During Adam Treadwell’s lifetime, this property was indeed farmland, but after his death in 1852 his family sold the land in parcels to potential developers. The handsome rowhouses that today make up the historic district were built between 1868 and 1876. 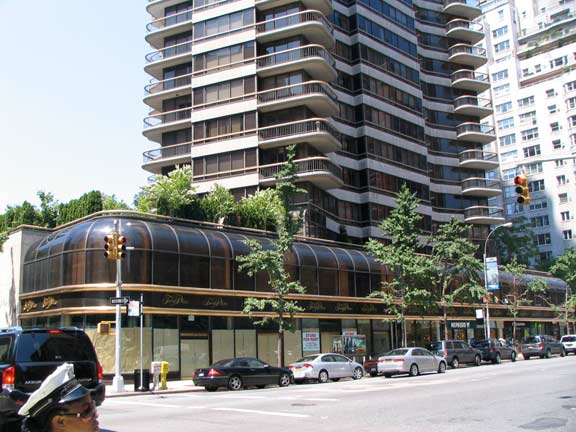 Before entering the historic district from East 61st and 3rd Avenue, take note of the 1980s-era (I think) high rise apartment towers, and a curved glass 2-story building hosting storefronts (which, in the recession, seem unoccupied.) 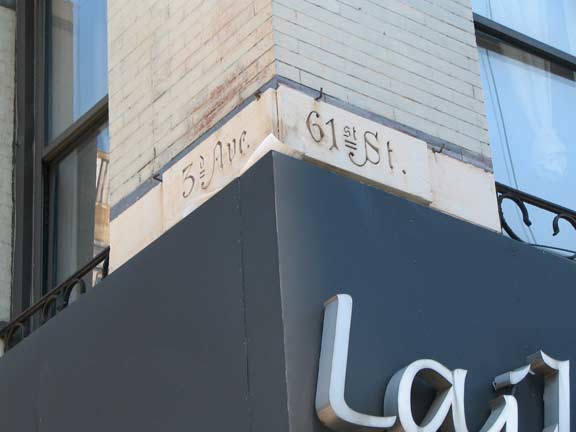 This isn’t part of the landmarked district , but this finely wrought carven pair of street signs is on the building on the NE corner. The letters and numbers almost resemble medieval blacklettering you find on holy texts. 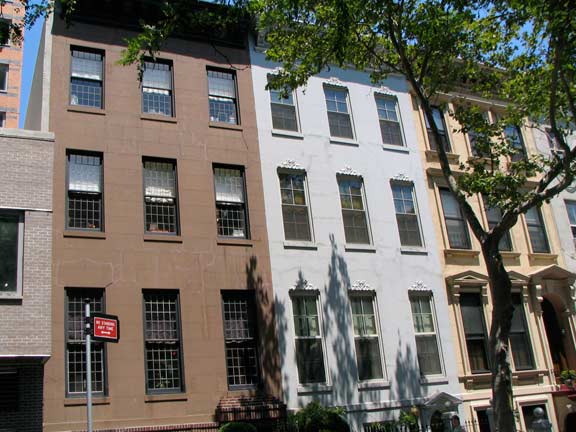 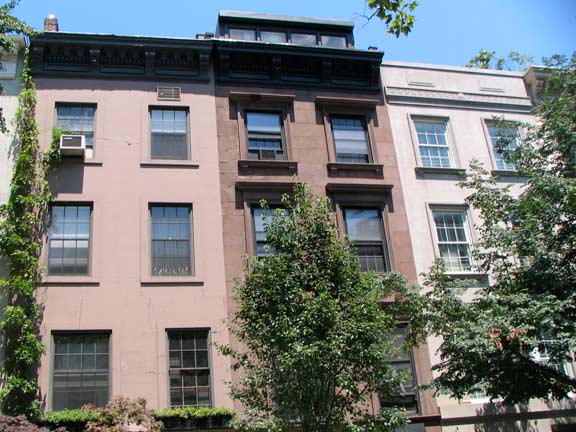 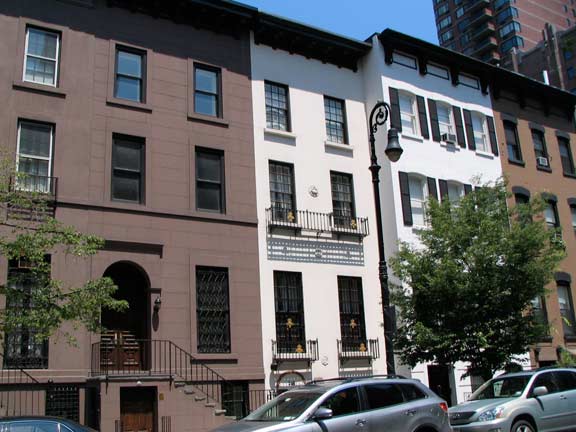 From the Treadwell Farm Landmarks Preservation Commission Report (the district was landmarked early on, in 1966, and no significant alteration can be made to the building fronts without special permission). Details regarding most of the the buildings in the District  can be found there.

The architectural importance of the Historic District lies in its consistent!y residential character, its uniform cornice height, and in the style of its buildings and care with which the buildings are preserved. Most of the houses wore constructed in groups as speculative real-estate ventures and have had their facades altered since their construction but, generally, they have retained a uniform character. Some of the architects are known, and they include such notables as Richard Morris Hunt,  Samuel A. Werner, James W. Pirrson and George F. Pelham.

This residential neighborhood is notable for its tree-lined streets and the generally uniform height of its houses. What is most striking is the uniformity of the architecture of these rows of individual town houses. This may be accounted for by the. fact that they were mostly built at the same period and that they are all beautifully maintained by their present owners. Although many have had their stoops removed to provide new entrances at former basement level, most of them have retained attractive iron areaway railings. Planting and flower boxes at windows are everywhere in evidence further enhancing the atmosphere of greenery.

The style of architecture most prevalent in the Eighteen ‘Sixties and ‘Seventies, when so many of these houses were built, was that of the formal French Second Empire, classical and dignified. It will most generally be remembered by the brownstone with its pedimented arched doorways and framed windows. Although the trim of doors and windows has often been simplified by subsequent alterations, the fine proportions and much of the detail remain an asset to this dignified neighborhood. 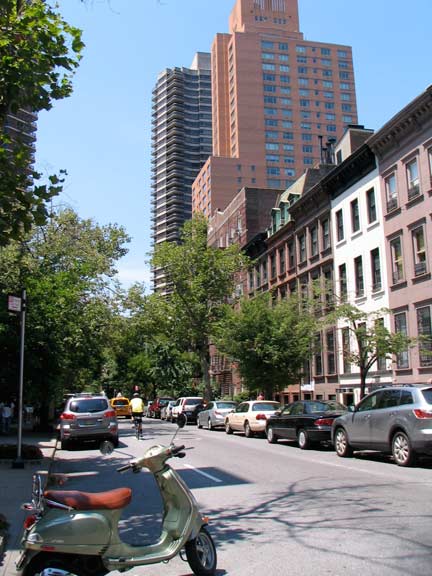 Looking west on East 61st. Note the contrast between the uniform heights of the Treadwell buildings and the high rises beyond. This is not a bad thing. Different styles of architecture, when seen together, can provide a vitality to both, as long as the styles are not too jarring. 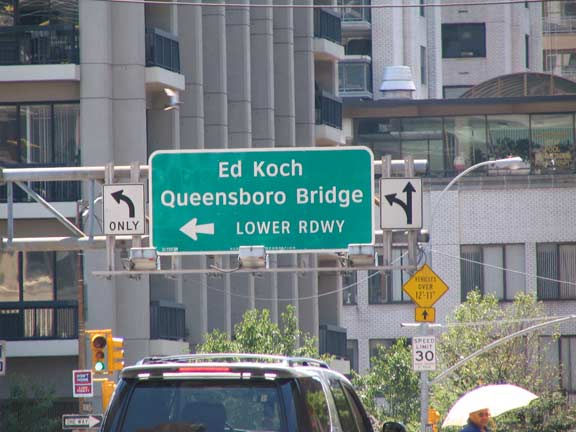 When you get to 2nd Avenue and look south, you’re greeted by signs welcoming motorists to the “Ed Koch Queensboro Bridge.” I know they don’t pay for these signs by the letter — maybe they do! but shouldn’t it be the “Edward I. Koch” Queensboro Bridge? The bridge now has three names, as Manhattanites call it the 59th Street Bridge. The colorful Mayor Koch served from 1978 to 1990, and even in his 80s, is still a powerful voice in NYC politics. 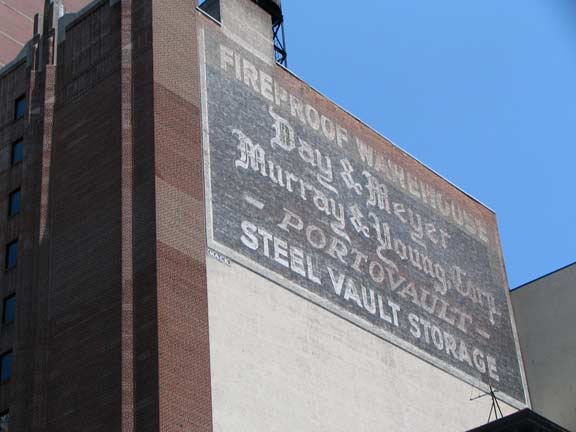 This huge painted sign reading FIREPROOF WAREHOUSE, Day & Meyer Murray & Young Corp. PORTOVAULT STEEL VAULT STORAGE is prominent when looking north along 2nd Avenue and when you are riding the tramway to Roosevelt Island. The letters are rendered in ecclesiastical blackletter, as well as serif and sanserif capitals. 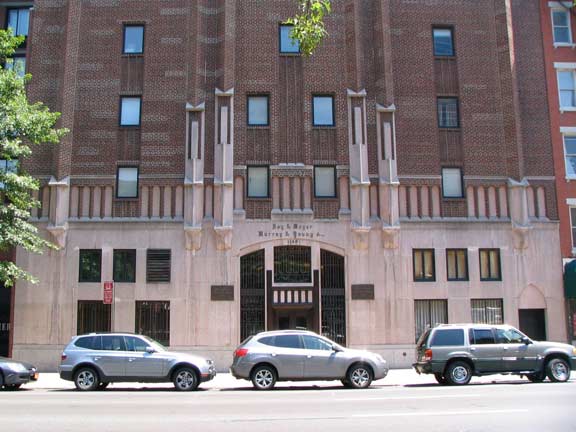 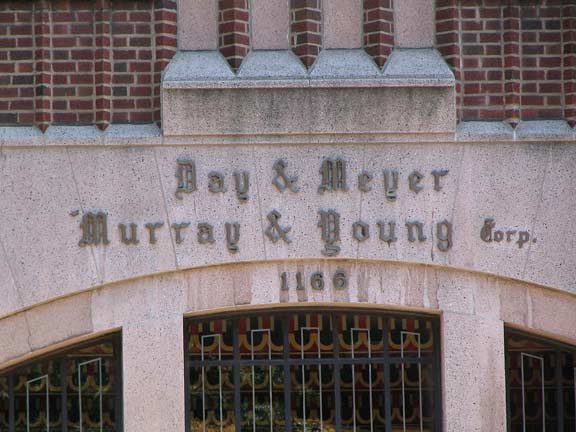 The sign is painted on the side of the warehouse it advertises, on 1166 2nd Avenue. The building still hosts self-storage and boasts Art Deco touches contemporary with its deate of construction in 1928.

Circling back on the northern part of the District, here’s a sampler of the well kept, historic houses. 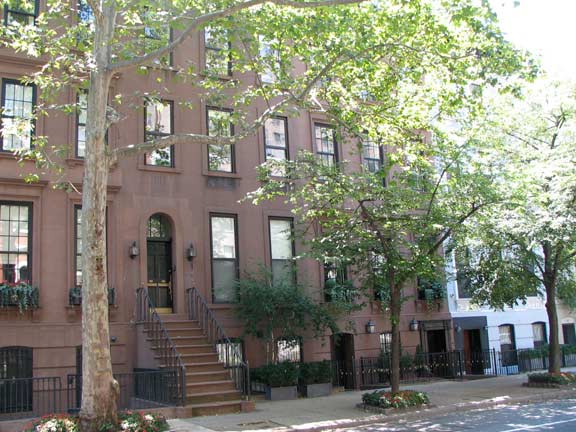 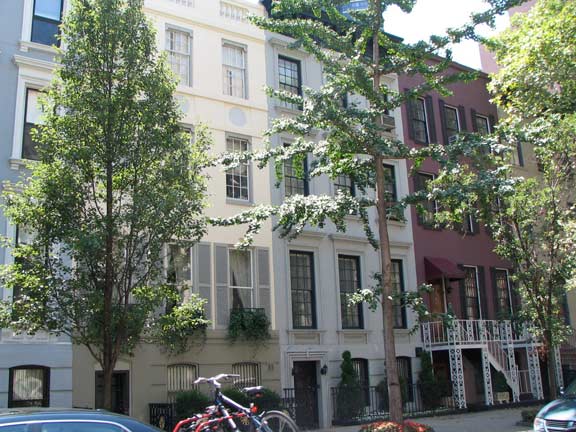 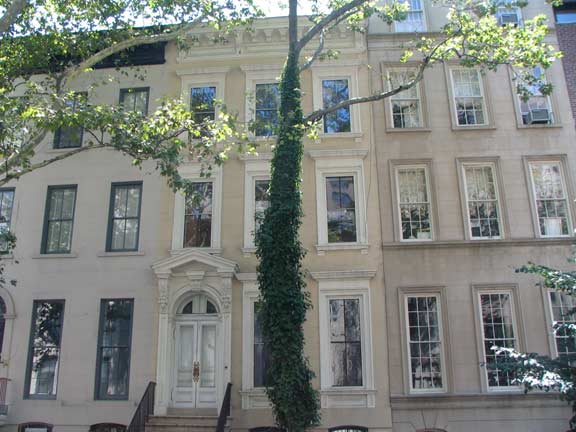 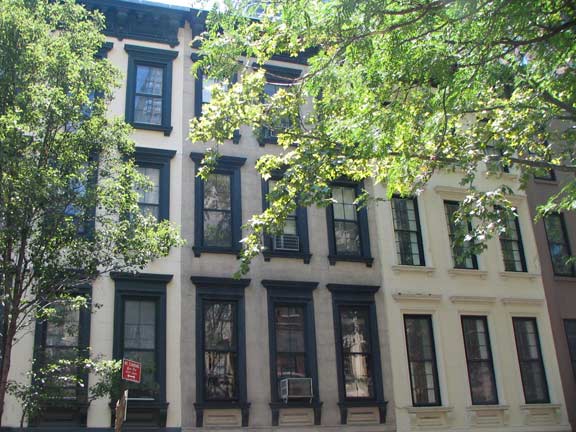 Through the years, the “Farm” has attracted big names in journalism, politics, architecture, publishing and showbiz to acquire homes on the two blocks, such as Walter Lippmann, Kim Novak, Montgomery Clift, Eleanor Roosevelt, Christopher LaFarge and Paul Gallico.

I’ve been a big fan of your site for some time.

A former docent and MHM researcher,

Got it — just fixed

I did hear that the entire neighborhood of the area itself is also named for a famer as well, which is Lenox Hill. This was named for Robert Lenox, who was a farmer that owned part of this area as well. However, it’s not given its name for the most part except for the hospital that is further up, and most just refer to it as the Upper East Side, but that’s probably mostly because realtors don’t use the name. I am not sure if others know about the neighborhood name or it’s just a small number, because I don’t want to give the wrong information here.

I came to this page through the link from the current page about Manhattan neighborhood names. Despite what the photo’s caption reads as I am writing this, the painted ad on that warehouse clearly refers STORAGE, not SHORTAGE. Hard to believe that has gone undetected for two and a half years. Other than that, nice work.

I live on 2nd ave and 62st. Recently had tree planted and would like to get a tree fence like the new ones on the block that were donated by the Ledoux family. Who can I call to purchase one of the metal tree rails on the sidewalk. Thank you Raymond.

-You write that currently you get off in Woodside, probably because of the LIRR stop at Roosevelt and 61st Street in Woodside.

-From 61st & Woodside, you are 1 subway ride away from the Upper East Side: Take the R train from 65th Street & Broadway, a 5-10 minute walk from the LIRR stop. The R takes you right to 59th & Lexington, very quickly. Way easier and faster than getting to the Upper West Side via Penn Station.

Don’t want to walk to that station esp in inclement weather.