The “High Line,” more properly the West Side Improvement, consisted of the construction, in the early 1930s, of two elevated structures: the Miller, or West Side Highway and the West Side Freight Railroad serving businesses, wholesalers and manufacturers near the Hudson River waterfront. The Miller was closed in 1973 after a truck fell through a hole in the roadway after decades of neglect, and the railroad’s last delivery was a load of frozen turkeys in 1980. The railroad structure, which originally ran south to the old St. John’s Terminal at Houston Street, was cut back to Gansevoort Street in the 1980s, although there is still an extant section that runs through the old Bell Labs building at Washington Street between Bank and Bethune Streets.

The Miller was torn down by the mid-1980s, while the Freight Railroad, which came to be colloquially known as the High Line, stood stolidly, unused, until 2002 when the City purchased it (after Mayor Giuliani made noise about tearing down the remainder) and developed it into a lengthy, high-concept park which has opened in two sections: 2009 (Gansevoort Street to 20th) and 2011 )West 20th to West 30th). Most of it runs along, or just west, of 10th Avenue.

I’ve always had a fascination with the freight line. I think I first saw it in the 1960s, in a cab, while my family was en route to the Port Authority Bus Terminal — I was fascinated that there was an el train in Manhattan. I remember a frigid afternoon in February in the 1980s when I was still working nights, wandering in the West Village and discovering it once more. When I began FNY in 1998, of course the “High Line” was among my first sites explored. I wasn’t, however, one of the interpid urban explorers risking arrest, incarceration, and torture by actually climbing the rusting staircases and edging around barbed wire to walk on the structure itself.

Under the High Line

The High Line Section That Won’t Be a Park

When the High Line was developed as a park, a lot of new money came into western Chelsea and many businesses that had been there for decades were pushed out. Some have also lamented that the High Line is clogged with tourists. I have never had the animus against tourists that many New Yorkers have — the objection to them being that they walk slowly and gawk, getting in the way of worthier folks hustling and hurrying on the way to their next buck. I have lived in NYC for over 50 years and I’m still a tourist in my home town. FNY does frequent tours, which bring in lunch money while I’m between jobs.

I have always been more interested in infrastructure than demographics, so my fascination with the old freight elevated has continued because the developers and architects working on the thing have kept around enough design elements from the old days that you still know it was an actual railroad — in some cases missing RR tracks have been reinstalled. 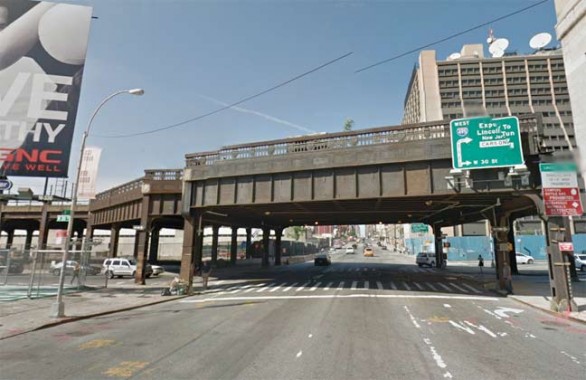 Part of the old railroad extended over 10th Avenue to the Morgan mail processing facility on 9th Avenue. This section will no doubt be used to create a wide pedestrian plaza. Construction on the last remaining section begins in late 2012 with the park expected to open in 2014. 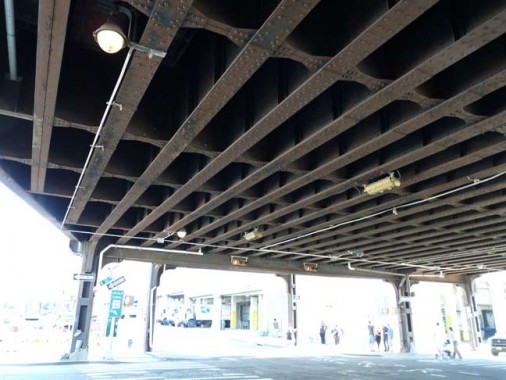 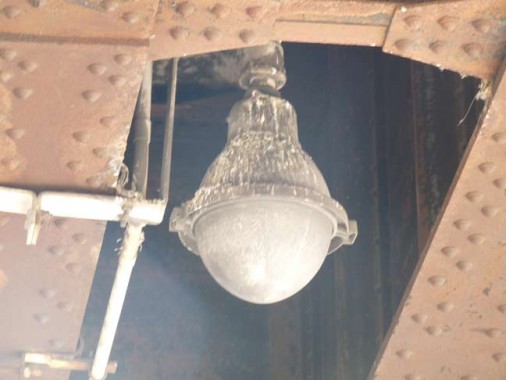 Beneath the High Line, 10th and 30th. I am hoping, probably futilely, that the set of 1940s Westinghouse AK10 cuplights, which are the last set of this type in the city still using incandescent bulbs, will be retained when the renovation happens, but they will probably be updated. 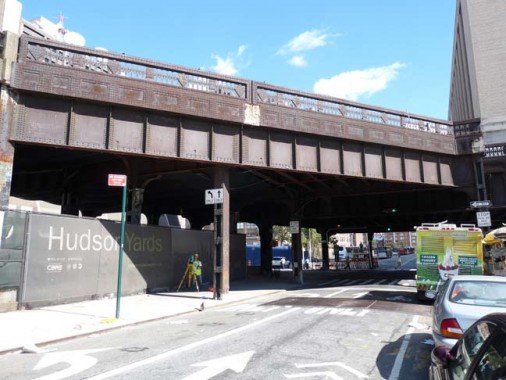 This is the unredeveloped High Line section extending over 10th at West 30th. 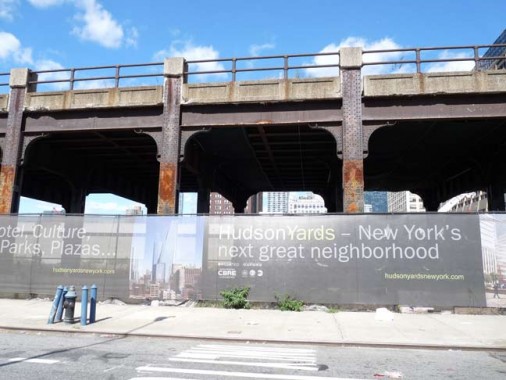 Much of the West Side passenger trainyards west of Penn Station will become a mixed-use residential/office building complex to be known as Hudson Yards. 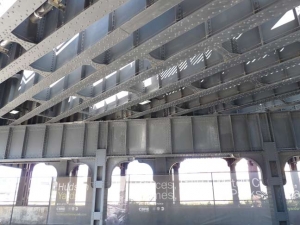 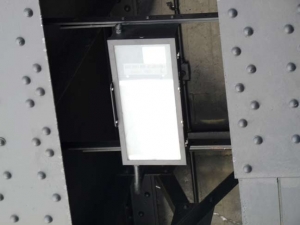 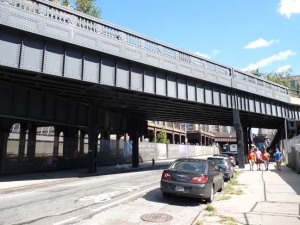 A short section of “improved” High Line here crosses West 30th. This is under the northern end of the section that is open as a park as of 2012. As you can see, the rust has been removed, paint applied and new lighting installed underneath. 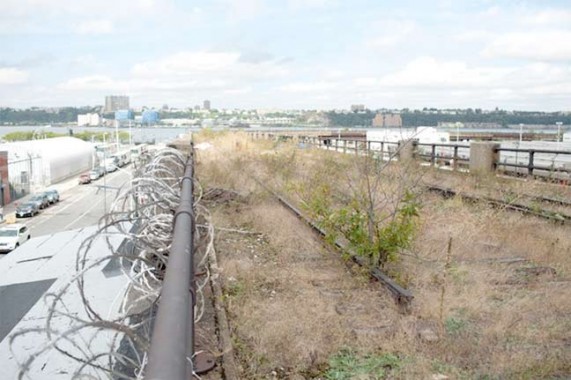 I mentioned I haven’t explored the ‘unimproved’ section of the High Line; however, Gothamist was invited up there as part of the groundbreaking ceremony for the final section, and these pictures were obtained, with broken tracks, weeds and barbed wire. The Mayor and other important worthies also attended. photo: Katie Sokoler, Gothamist. 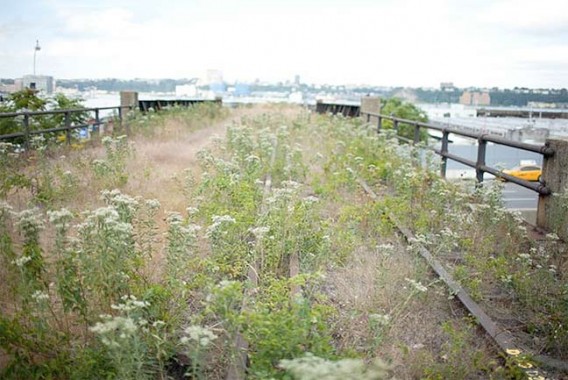 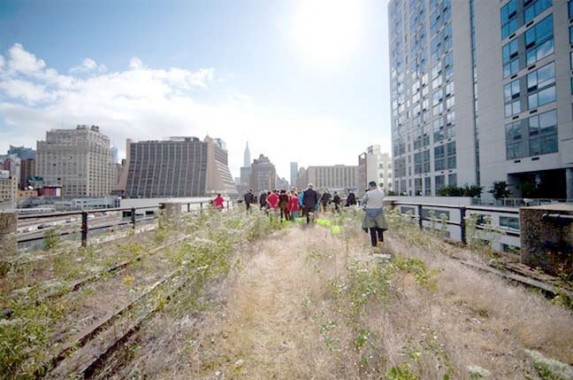 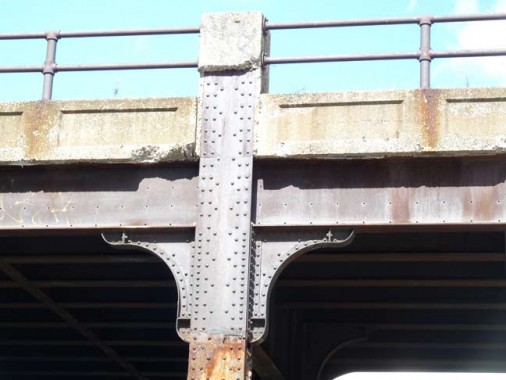 A closeup look at the deterioration that has affected the concrete roadbed. 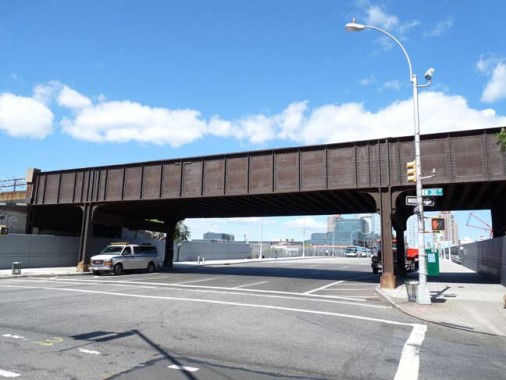 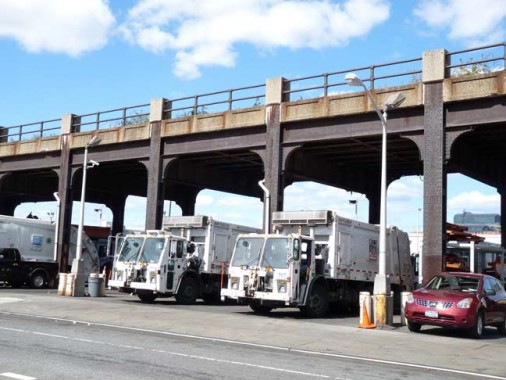 West of 11th Avenue the High Line passes over a parking lot for Sanitation Department trucks. Since these can emit a strong odor in the summer, it remains to be seen whether the parking lot will be retained once there’s a park on the trestle. 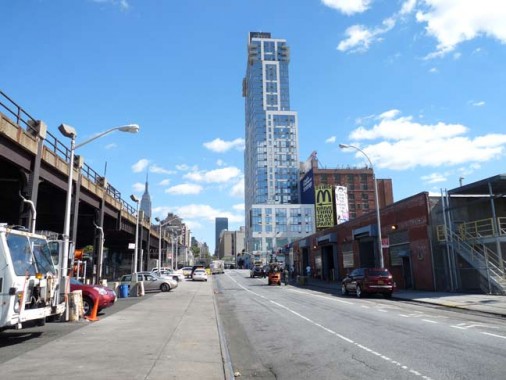 Looking east on West 30th at one of the new high-rise projects that has sprung up on the Far West Side in recent years. The King of All Buildings impassively reviews the changing scene. 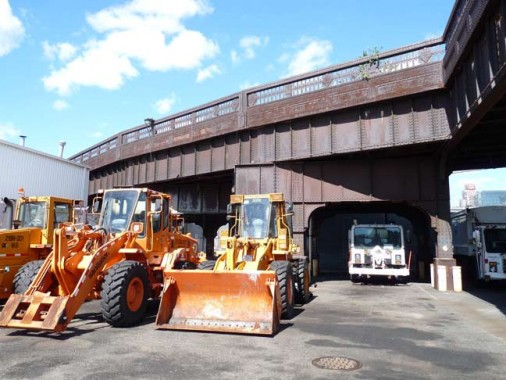 The High Line structure turns north here to parallel 12th Avenue. Snowplows did not get a workout in the 2011-2012 winter, among the mildest on record. 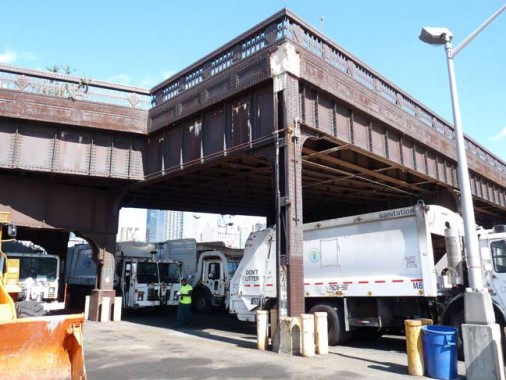 One of my favorite aspects of the High Line — and this was also true of the Miller Highway — was that it curves here, juts out there, with always a surprise, seemingly, just ahead. That quirkiness, though, made the Miller a tough road to negotiate for the driver who wasn’t used to it. This former monastery in Union City, NJ doesn’t loom quite this large from West 30th — I used an 18x zoom lens. Still, it makes an impression. The High Line makes its final bend to parallel 12th Avenue. I imagine the barbed wire keeping miscreants and vandals out of the MTA railroad yards will remain in place. I had been unaware the railroad yard had a name. Caemmerer (1928-1982) was a NY State Senator and Chairman of the Senate’s Committee on Transportation from 1972-1982, and in that capacity, he obtained funding to construct this facility.

This is an older sign, as it uses a former MTA logo. 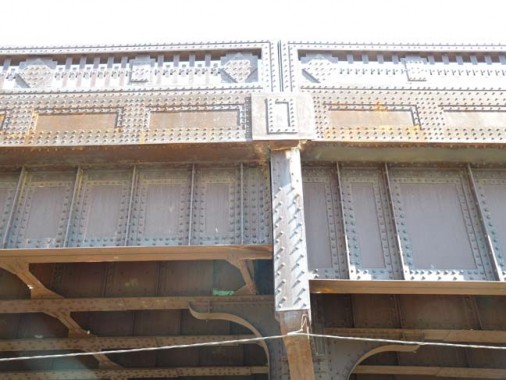 Because of detail like this, I’m glad the High Line renovation archiects and designers decided to retain the ‘look and feel’ of the old railroad line. This viaduct brings tracks over West 33rd at 12th Avenue. 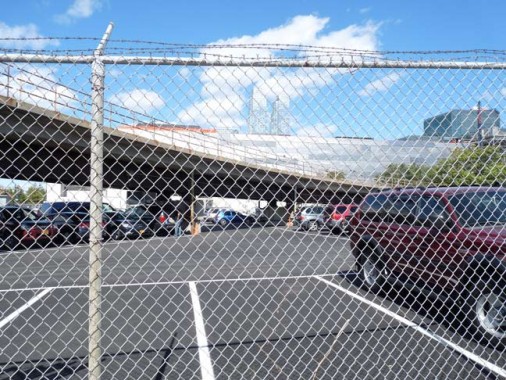 The elevated tracks gradually descend to grade and peter out at the edge of a parking lot at West 34th near 12th Avenue. I’m not sure how far the public park section of the new High Line park will extend here — I suppose that will become clear between 2012 and 2014.

Thanks for the info. I haven’t taken the time to check this out in the detail you have. Did you happen to come across any old New York Central signage? Like you I am more interested in the infrastructure and built aspects of the city. I don’t take the vapors that Jeremiah does over at Vanishing New York about tourists and closing coffee shops. Things open and close all the time in the city, get over it.

There is a ‘NY Central’ painted on the trestle on one of the West 20s streets. Jeremiah laments the closing of several longstanding businesses along the High Line, with which I agree. However, I like tourists.

I like tourists too Kevin. I’ve lived in Brooklyn Heights for almost forty years now and I have no idea how many pics I’ve shot of tourists against the Manhattan Skyline from the Promenade (though I always warn them to be careful of who they ask to hold their cameras and take the pics!)

Someone should make a recording of all the noises that were made in the area then! That’s what New York was to me! For example: on 9th avenue, we had had heavy truck traffic and cabs early in the morning and believe or not you could the horns of the locomotives and the clikity clak of the freight cars! It was endless! GQ……