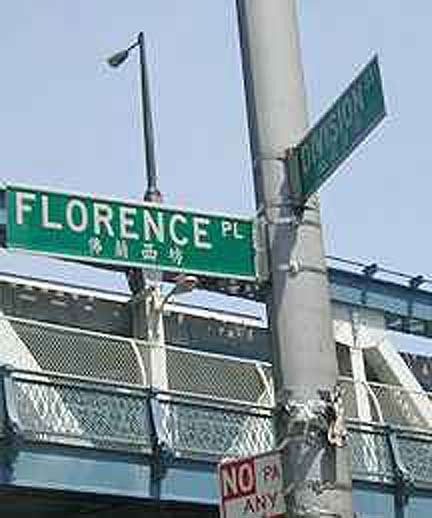 It all began on a lunchtime stroll when I was working at Macy’s in the summer of 2001. I’d frequently take the train downtown or uptown — sometimes I’d go as far afield as Brooklyn. I was going up Division Street, probably on my way to the F train at East Broadway, when just before I got to the Manhattan Bridge, I spotted a Deskey post with a Florence Place street sign. [sorry for the crudely blown-up scan].

Now, I had vaguely recalled a Florence Place in these parts. The Bible on these matters, Henry Moscow’s Street Book, says “Florence Place was authorized by the Board of Aldermen July 1st, 1913, for the enlargement of Market Street between Forsyth and Division Street.” There’s just one thing about that, though, since if you go by that reasoning Florence Place would have to go through the Manhattan Bridge approach to reach Forsyth. And, Forsyth intersects Division once you pass under the Manhattan Bridge.

Meanwhile, Florence Place shows up on precious few maps, and I’ve checked editions from the 1910s through 1940s. Geographia’s “Little Red Book” street guides from the period say Florence Place can be found at 70 Division Street.

In 2001, the Florence Place street sign pointed at the entrance to a parking lot that at one time may have been a dead-end Florence Place, and there’s a parking garage on that site in 2013. However there’s another possibility. 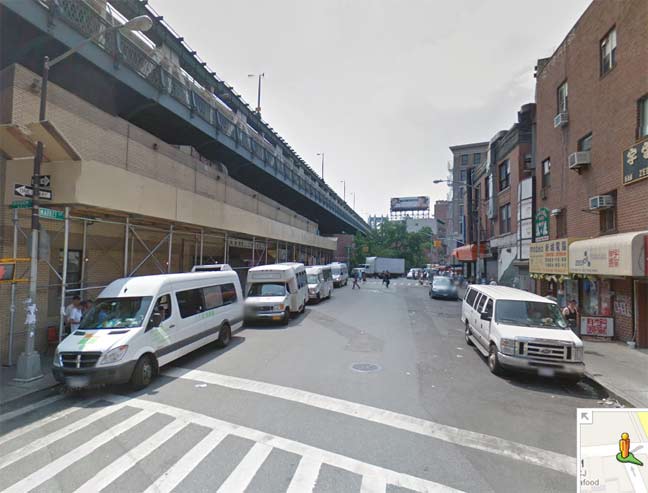 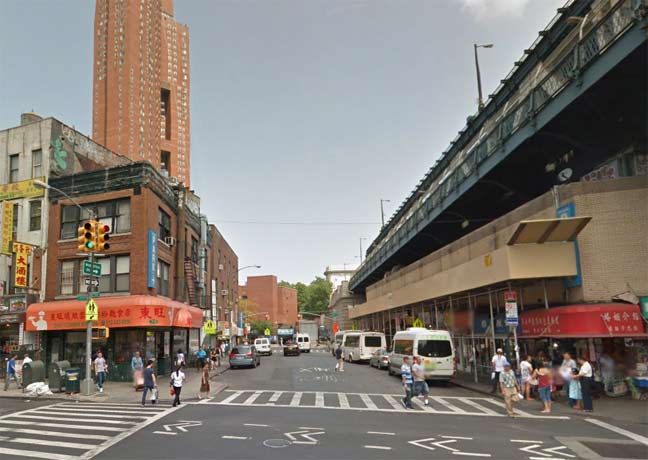 Hagstrom used to produce a downtown Manhattan map that ran from the Battery north to Tribeca, and barely made it to the Manhattan Bridge on the east. (I don’t have a scan of that one.) It labels the piece of Market Street between Division and East Broadway as Florence Place. So, what we’re looking at here may once have been Florence. There are no street addresses on it.

There’s one more monkey wrench to throw in. 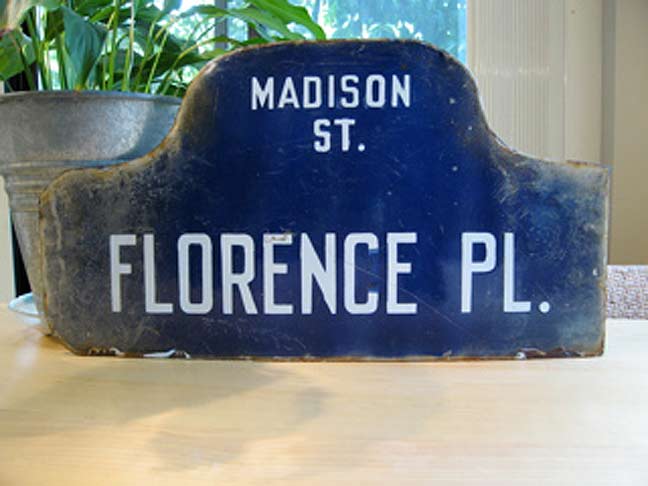 Here’s a classic navy blue and white Manhattan street sign indicating Florence Place with an intersection at Madison Street. None of my sources indicate Florence got that far south, and also note this is a nonstandard font for this ilk of NYC street signs, which usually featured a serif font.

In any case, the Florence Place street sign I spotted in 2001 is long gone, as is any further mention of the alley, wherever it was.

I do think Gil Tauber has the definitive word in Oldstreets:

Another such odd alley along the Manhattan Bridge, Mechanics Alley, is described on this FNY page.

Have you ever come accross Birmingham St? It’s on the other side of the Manhattan Bridge opposite Mechanics Alley.

It’s interesting that in 1954, the NY Times opposed the renaming of Livingston Place. Where was the editorial board to defend Triboro and Queensboro from politically-inspired renaming?

I remember when Confucius Towers was built. It was around the mid 1970’s.

Some maps show it there and some, where the 25 map has Market Street

Florence Place was extant until the early 1970’s, when Confucius Plaza was built. The 1925 map linked above shows the same route at that time. I remember a black on yellow sign at the same corner where the 2001 sign was. At the intersection of Bayard and Division Streets, there was no sign for Florence Place. Also at the corner of Madison and Market Streets, there are street signs engraved on the N/NW corner building. There is no sign for Florence Place there either.

If you walked a few blocks down to Monroe Street, you would have seen the street lights set back and Monroe Street narrowing under the Manhattan Bridge, That is the last vestige of Hamilton Street where it merged with Monroe. Knickerbocker Village construction demapped Hamilton Street in the 1930’s.

I wonder if that Florence Place/Madison Street sign was for a Brooklyn intersection. Found this link which mentions a Florence Place in the Eastern District of Brooklyn.

There’s a Florence Avenue in Gerritsen Beach but that’s all.

That sign is definitely a mystery. I was able to find a Florence Place on Staten Island, but I do not believe that borough ever used those type of signs

That sign was there in 2011 when I happened to be there. It must have been lost recently.

Was there once a Florence Slip? Or a Florence Street or Place as early as 1851? Here’s the background to my question.

My grandfather’s grandfather, James Hudson Searing, and his wife named their children, born between 1847 and 1854, after streets in New York: Hudson Redowar (it’s family lore that Hudson Redowar’s first name referred primarily to Hudson Street rather than the family name Hudson — the Redowar is a mystery), Bond (the family was living on Bond Street the year he was born), Florence Nevada, and Leonard Bleecker (the family was living on Bleecker Street when he was born).

As for Florence Nevada Searing: it’s family lore that she was named after Florence Slip. But I haven’t been able to track down any Florence Slip. Might there once have been one, though? Or at least a Florence Street or Place as early as 1851, the year Florence Searing was born?

(The only other explanation I can come up with for her name: she was named for Florence and Nevada Streets in Newark, where her father James had grown up and where, after an adult life working and living in NYC, he actually died. But that doesn’t fit the family lore about children named after NYC streets.)

Another clue? I have an old NYC street sign for Florence Place with the cross street at Division St. This sign looks more like the standard NYC blue humpback signs and font. Kevin, let me know if you want a picture to post on the website. I got the sign about a year ago.