By now you are aware that I am a milestone maven, eagerly seeking out the mile markers placed in the colonial and postcolonial eras along major roads. In early 2013 I found out about the Post Road 12-mile marker embedded in the stone fence at Isham Park, I found the 3 and 5-mile markers along Ocean Parkway, and even did a page on mile markers along the Long Island Rail Road. 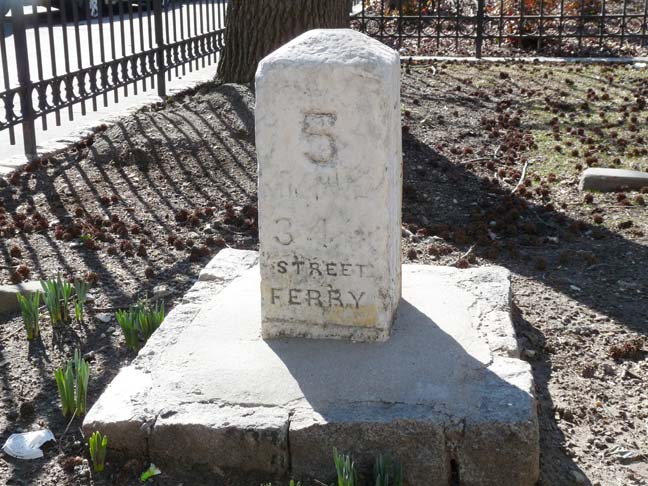 I was surprised to see, on an early 2013 jaunt in Flushing, the 5th mile marker of what is now Northern Boulevard beside the front driveway of Kingsland Homestead on 138th Street, the home of the Queens Historical Society. Since I hadn’t visited for awhile, I don’t know how long it’s been there — will have to check during business hours to find out.

Northern Boulevard was built in 1859, and opened to traffic in 1860, between what is now Vernon Boulevard and the Flushing River by the Hunter’s Point, Newtown and Flushing Turnpike Company. It connected to roads further east past the Flushing River, but the newly built stretch was named Jackson Avenue for the turnpike company’s construction supervisor, John C. Jackson. By 1920, most of the road had been renamed Northern Boulevard, with the westernmost section between Vernon Boulevard and Queens Plaza retaining the old name.

Jackson continued the colonial practice of placing milestones along his new route. Each marker showed the distance between the 34th Street Ferry at the East River, and also the distance to the bridge crossing the Flushing River.

The 5 mile marker survived in place, amazingly, until 1987 when it was removed to the Langston Hughes Queens Library branch in Corona. Now, it is here at the Kingsland Homestead.

DEATH OF A FADED AD

Last year, I took the scenic route back down from Albany. It may have been in Rhinebeck. At the train station, the parking lot extends along a rock escarpment. And there is a beautiful mile marker right there at the base of the escarpment. Should have took a photo.

Very Cool Kevin…..I am also interested in these old mileposts. The above is a nice representation. Before there was GPS, good maps, etc…..before cars and trucks, people either walked or rode a horse. I assume these markers were rather important to those travelers. Knowing how far they had come and how far they still had to go would have been important. Kind of like trail markers in the forests today. How many people in years past stopped at these mileposts, perhaps with a sigh of relief, knowing they only had a certain distance still to travel. And it is nice to see them outside although the mile posts at the NY Historical Society from the Boston Post Rd are nice…..

The milepost marker at the Rhinecliff train station was probably 89, representing 89 miles from Grand Central Terminal.