A DIFFERENCE OF OPINION, Sheepshead Bay

In most parts of the country, this pleasant two-story house at the corner of Voorhies Avenue and East 22nd Street, with a wraparound porch, gables, pitched roof and dormer windows, would be seen as a neighborhood attraction and a symbol of its desirability. There would be no talk whatsoever of tearing it down — it would be clamored over and desired if it were for sale.

….that property is the former home of Frank Clair, the founder of the Circle Line. The Circle Line vessels were the first of Sheepshead Bay’s recreational fishing fleet, and also operated as ferries. The company expanded, eventually scoring the contract to operate the ferry to the Statue of Liberty. Although they sold the company (I believe), it still has the Statue of Liberty route.

That stretch of Voorhies Avenue was also once known as Millionaire’s Row, where the wealthy lived when this was still a resort and racing community. A lot of big awesome houses. Unfortunately, many have been torn down in similar fashion. 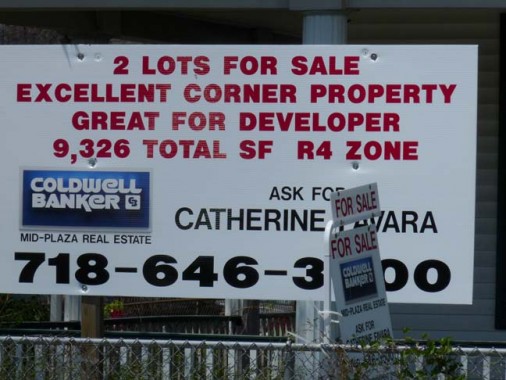 In modern-day New York City, however, developers and their political supporters think of houses like this as wasteful; only one person or family can live therein, and since the mayor has expressed his desire, or at least believes, that one million more people will live in New York over the next 30 years, room must be made.

Therefore the banks, the developers, and the local politicos find it beneficial to tear down buildings like this — they’re out of date. To them, we need buildings that will house five families or more.

Before too long, this relic of a disappearing Brooklyn will vanish, and stock housing with a rusting fire escape and concrete lawn will take its place.

Needs some rehab but it could be really nice. Strange that it can make it for a century and a half and in the end nobody cares about it. Sad mentality indeed. The most successful areas have a variety of different housing types. In diversity there is strength.

Moreover, that property is the former home of Frank Clair, the founder of the Circle Line. The Circle Line vessels were the first of Sheepshead Bay’s recreational fishing fleet, and also operated as ferries. The company expanded, eventually scoring the contract to operate the ferry to the Statue of Liberty. Although they sold the company (I believe), it still has the Statue of Liberty route.

That stretch of Voorhies Avenue was also once known as Millionaire’s Row, where the wealthy lived when this was still a resort and racing community. A lot of big awesome houses. Unfortunately, many have been torn down in similar fashion.

Honestly if I owned that property I’d sell it for as much as possible. Wouldn’t you?

I’d give a damn about the neighborhood and fix it up.

Agreed, so sad, indeed. There appears to be another very similar (sans wrap around porch) one that is cater-corner across the street. Looks as though it has been made a MF dwelling and has the obligatory rusting fire escape. Greed has no class.

If bought by a developer it will be torn down and leave an empty lot, as so many of those similar plans have left around here. What will be needed 30 years from now is unimportant. If it isn’t needed at the moment, it won’t work,

I agree with you 100%, however the house has been vacant for a couple of years and was flooded during Sandy. I haven’t seen any remediation work done since then. It will be replaced by a 6 or 10 family shitbox in the near future.

Local oral history says this house belonged to one of the owners of the Circle line. Can anyone confirm this?

I was there at an “estate sale” last year and they told me the owners had been or were owners of the Circle Line. Never bothered to confirm that. My wife and I bought very little stuff, but we usually do.

listen to joe hill, speaking from the grave…

I agree sell for as much as you can,my folks passed away and I sold there house in the Rockaways and moved west(Wyoming)and only look at ForgottenNY to see what Im not missing,WEINER for mayor?????????????? That should make my income tax free living a very GREAT PLEASURE…..

I’m with you. I relocated to AZ in 2005. I read the internet edition NY Post because the AZ Republic reads like News Day (same owner). It looks like the next mayor will erase the Giuliani legacy & NYC will be the worst of all possible worlds: high taxes, high crime, corrupt one party politics. In short, a banana republic ruled by a Manhattan based elite catering to the numerous special interests with a small & shrinking middle class. If you’re part of that vanishing middle class: good luck. As for that house: too bad. With age comes depreciation. When the cost of renovation is higher than market value you sell it as a distressed property & the new owner follows the market. This is called capitalism & I’m sure that it sounds exotic & cruel to some of you hipsters. However, consider the fact that since 2000 one million have forsaken the Empire State. Was it because we’re not good enough or perhaps greener pastures beckon? FNY is a nice trip down memory lane but the NYC of times past is merely a state of mind. Adaptation is a means survival so move on or be prepared to be miserable.

The plowing under and tearing down of Brooklyn’s single family housing stock is onme reason I left 23 years ago.

This house was my second home while growing up. Confirming It belonged to my Uncle, Frank Clair. one of the original founders of the Circle Line, the Statue of Liberty ferries and the former Breezy Point ferry as well. So many of my childhood memories took place within its walls or on its grounds. Until its recent sales offer, it was still held as a Clair property. It’s usefulness diminished with the end of the SOL ferry contract. It’s heartbreaking to know that rather than someone enjoying it..it will probably be sacrificed to development as so much of the Bay has been.