I have my reasons for calling 350 5th Avenue The King of All Buildings. #1 is, I really think it is, and #2, there’s the original Empire State Building, at 640 Broadway, the southeast corner of Bleecker.

It’s a 9-story building with an unusual shape — there’s a 25-foot frontage on Broadway and 200 feet on Bleecker, with a vaulted basement that is 30′ x 300′. It as designed by future Macy’s architects De Lemos and Cordes in 1897, and originally was home to the Empire State Bank, hence the name. Presently a Swatch watch store and a Two Boots pizzeria take up the ground floor. Until 2011 the basement vault was home to an upscale haberdasher called Nom de Guerre — but it was unmarked and you had to know someone what knew someone to get in. 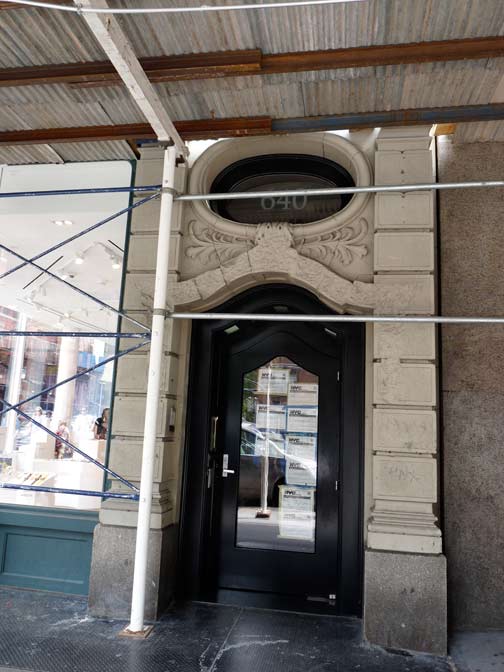 There had been a nameplate at one time identifying it as the Empire State Building, but it’s now buried under the number over the front door.

[…] you’ve seen it? Well, 640 Broadway, designed by DeLomos and Cordes and completed in 1897, was originally home to the Empire State Bank. And above its entryway on Broadway were the words “Empire State […]