The main north-south conduit between Elmhurst and Woodhaven and the Rockaway Peninsula, Woodhaven Boulevard, was also a two-lane dirt road before a major widening and straightening that began in the 1910s. 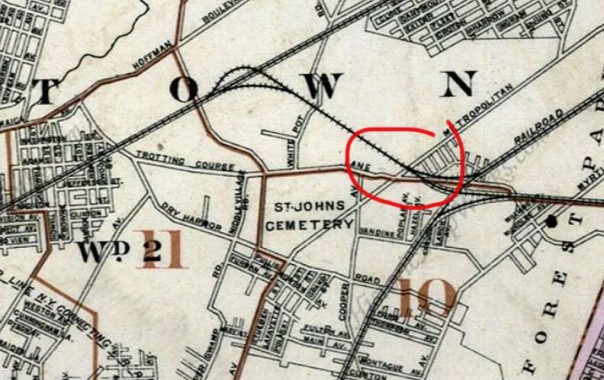 This 1909 map shows major routes in what’s now Elmhurst and Forest Hills that now go by different names (except for Dry Harbor Road, which has retained its name, and Metropolitan Avenue: note the center road, Trotting Course Lane — I have marked in red its intersection with Metropolitan Avenue. The name refers to the race tracks and “trotting courses’ once found in Woodhaven.

Near that intersection, the road had major crossings with the east-west Long Island Rail Road Montauk branch, which is still in place, and the Rockaway Branch, which isn’t. 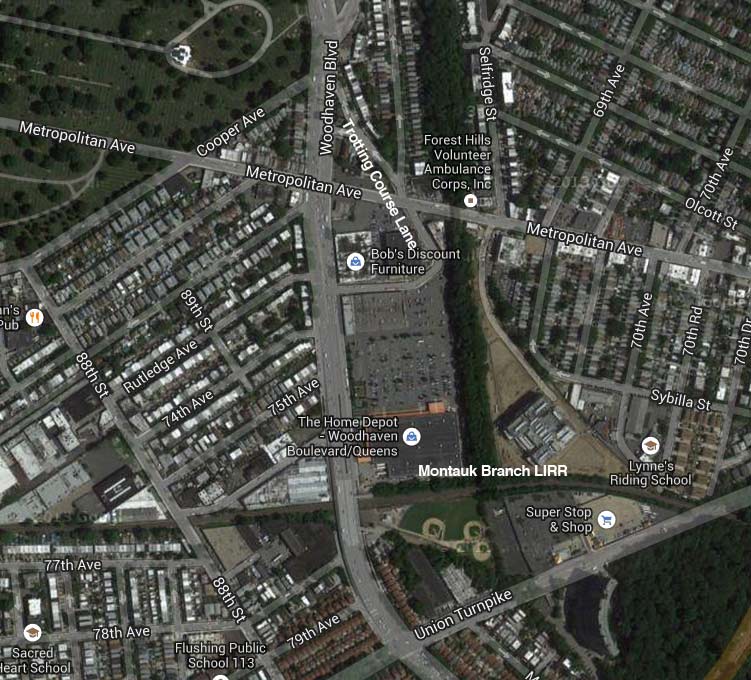 In subsequent years, that piece of Trotting Course Lane was divided in two, and today a Home Depot stands where the old road once ran. 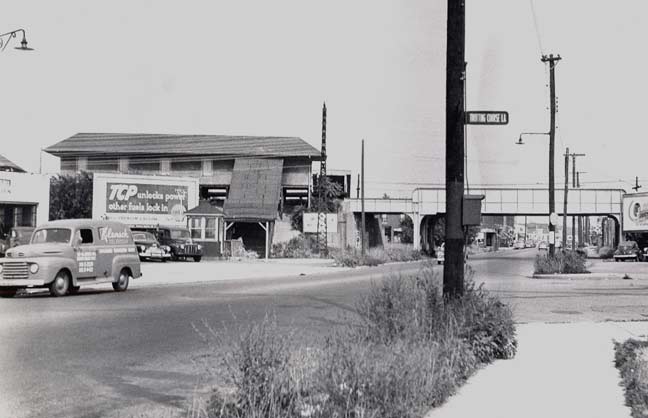 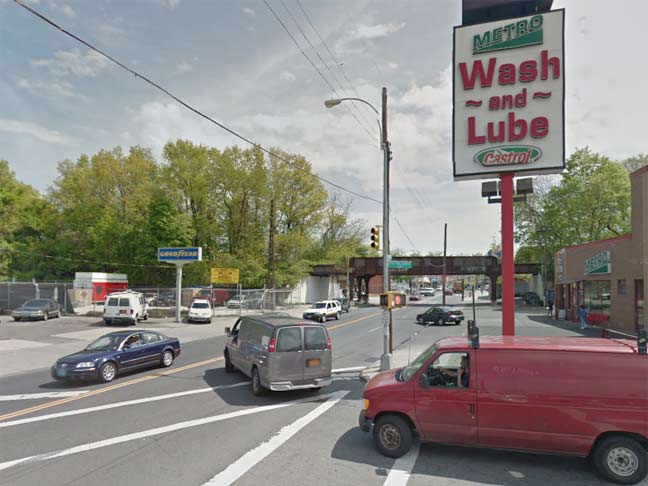 Art Huneke of Arrts Arrchives, an online history of the Long Island Rail Road, sent over several scenes from he old days showing TCL’s interaction with the tracks. These two photos show Metropolitan Avenue at Trotting Course Lane, looking east, with the top photo taken around 1945.

In both photos we see the Rockaway Branch bridged over Metropolitan Avenue but in the first picture the Parkside station is still open for business, as it would be until 1962 when the line was taken out of service. 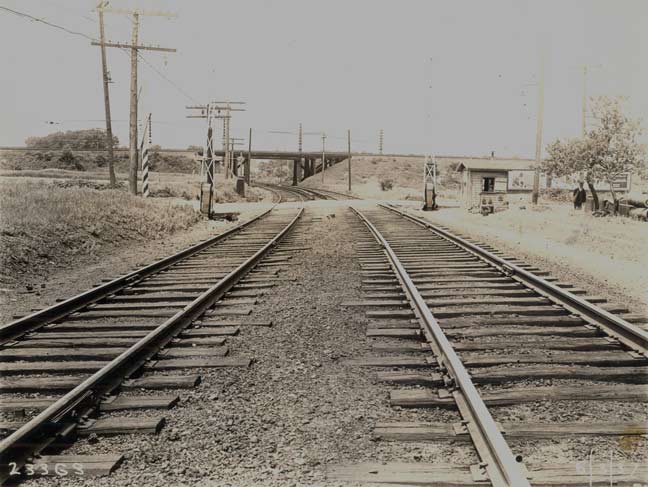 This photo courtsesy Huneke, circa 1915,  shows Trotting Course Lane crossing the Montauk Branch at grade, with the Rockaway Branch on the overpass in the background. 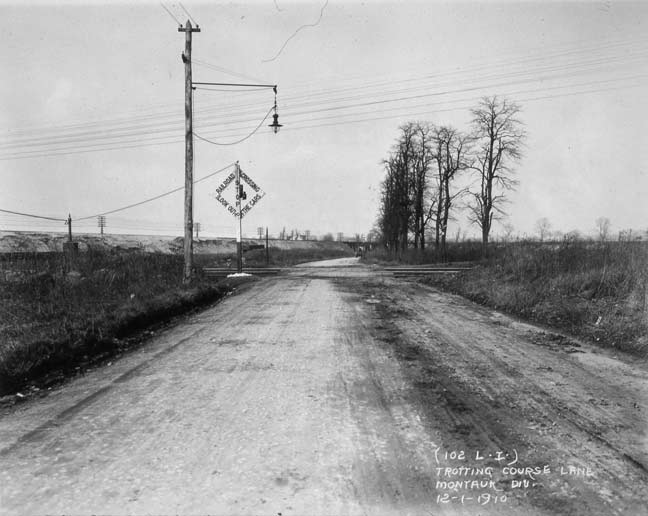 In 1910 Forest Hills was still open country and TCL is shown crossing the Montauk Branch. This location is presently in the rear of a Home Depot fronting on Woodhaven Boulevard. 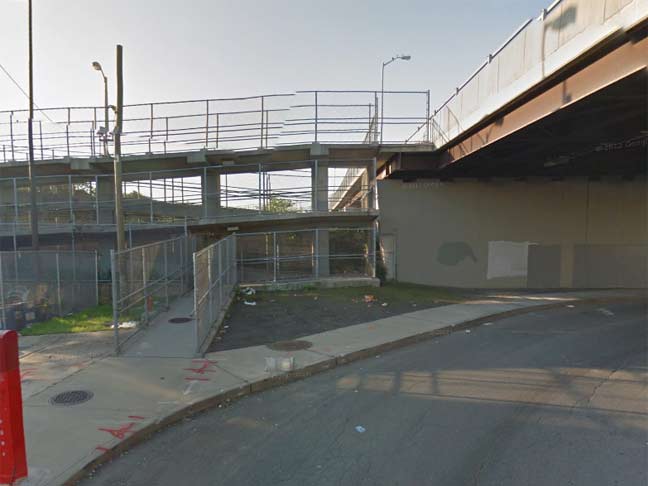 I’m taking liberties here, because Woodhaven Boulevard is a few rods west of the old Trotting Course Lane route, but the crossing looks like this these days, as the mighty Woodhaven Boulevard was bridged over the tracks, with a surface road built for local deliveries.

Next time you are honking your way up or down Woodhaven Boulevard, consider that it was once a rural lane mostly traveled by horses and carts in the dim past.

If you check Bing maps, Trotting course lane exists south of Union, north of the Jackie Robinson and east of Woodhaven. Google doesn’t but at streetview level it also is tagged as TCL.

Isn’t there another section south of Union Tpke, going towards the Interboro?

yes, there is, you nailed the location… (not too far from the horse crossing signs on union coincidentally)

Looking at a GREAT “1924” aerial map available from the NYPL, you can see that TCL continued south from Metropolitan Ave and went under the Rockaway branch just behind the current Home Depot. It then crossed the Montauk branch at grade just behind the new, fancy Queens Metropolitan High School. It then continued alongside the east side of the Forest Hills Crescent apartments and continues as TCL (at least on some maps) to rejoin Woodhaven Blvd. at the Interboro/Jackie Robinson Parkway overpass.

The pictures in this article are great.

At this time there is a major debate in Queens between groups that want to turn the old LIRR Rockaway Branch right-of-way into a linear park (“Queensway”, similar to the High Line in Manhattan), versus groups that want to rebuild the r.o.w. for rail transit. The north end of the line, where it once turned northwest onto the LIRR Main Line west of the Forest Hills Station, is about two blocks south of the Queens Boulevard IND line at 63rd Drive Station. Just geographically east (operationally north) of that station the original tunnel was built with provisions for a turnout that would lead to the old LIRR line.

In 1933, when the IND Queens Blvd. subway was under construction, New York City and the LIRR nearly consummated an agreement that would have seen the subway connection built and the LIRR line incorporated into the subway system. This never did happen, although the LIRR line south of Liberty Avenue did eventually become a subway route in 1956.

The old photo of TCL crossing the Montauk Branch shows it doing so at a point somewhat further from the elevated Rockaway line than I had initially thought. It always seemed to me that one of the reasons why Woodhaven was moved to the west at this point was to prevent too many intersections from crossing each other in very close proximity. Woodhaven’s new route is actually more of a loop than a straight line; it also, in the area south the the Montauk Branch and north of Myrtle Ave., isolates a small enclave of Glendale by creating a natural boundary between it and the rest of the neighborhood. If Woodhaven was extended along the TCL route, it would not have been any “loopier” than the current set up and would have kept the Glendale neighborhood intact.

There’s a really short place named Polo Place between Woodhaven Blvd and Trotting Course Ln. Could it possibly be related to the trotting course?

I once thought that too. However, when you look at the its out, it seems that Polo Place is simply a link between TCL and the new Woodhaven Blvd. route. I doubt that Polo Place even existed brfore Woodhaven was rerouted. The name chosen might just have been coined to relate to the Trotting Course theme. (If anyone can prove me wrong on this, by all means please do so.)

This reminds me of Epsom Course in the Holliswood section of Queens. Apparently, it was once a private trotting race course many years ago. If you look at Epsom Course from a map, it’s oval shape as a track is obvious.

Back in the seventies I dated a girl who lived near there. We often wondered about the origin of the name, thank you for the info, Kevin.

The current portions of TCL south of Metropolitan Avenue (to 73rd Avenue) and south of Union Turnpike (from the Crescent Apartments to 82nd Avenue) are really in Glendale. The Rockaway Branch makes up the eastern border of Glendale, with the exception of the small section of Union Turnpike between there and where the Montauk Branch crosses over, which is also Glendale.

Polo Pl. was part of an alphabet sequence of streets that begins with Austin in Forest Hills. You will note that each street north of Polo begins with the previous letter in the alphabet. Polo Pl. was too short after Union Turnpike was constructed was undoubtedly de-listed for that reason.