Like any big city, New York is located at the juncture of major interstate highways and their auxiliary routes. For example, I-95 has the Long Island Expressway (495) as its auxiliary branch and I-78 has a host of auxiliaries such as the BQE that were never linked to it because of neighborhood opposition in the 1960s.

Nearly 30 years before the Eisenhower administration criscrossed the country with the interstate highway grid, the New York State Highway Department decided to assign its own numbers to some of the longer intercity roads within the state. The shield for state highways was based on a silhouette of the state’s seal.

For Long Island, 25 and 27 were the first east-west routes to appear on the map. Within a decade, auxiliary routes that ran parallel to them were assigned. Route 25 in Queens covers Queensboro Bridge, Queens Boulevard, Hillside Avenue, Braddock Avenue and Jericho Turnpike.

Its two auxiliaries today are 25A, which covers Jackson Avenue and Northern Boulevard; and 25B, which covers Hillside Avenue in eastern Queens. Prior to 1970, there were also 25C and 25D, the former’s numerical designation removed from the roster in 1970 and the latter being promoted to I-495 after 1958.

This being Forgotten-NY, you can be sure that there is a remnant of 25C somewhere within our city, or in this case, just a few feet beyond the border. 25C happened to be Union Turnpike, the nearly straight line route that separated the towns of Flushing and Jamaica prior to their consolidation into Greater New York.

Although the city portion of Union Turnpike was removed from 25C, the short portion of the road running through Lake Success in Nassau County still has two 25C signs posted on it. 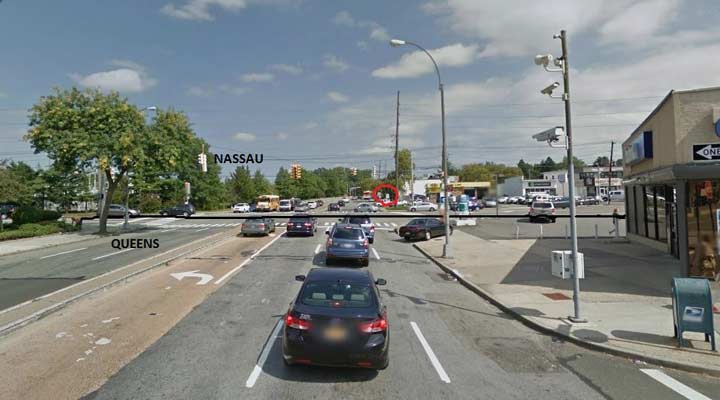 Traveling eastbound, one can see a 25C sign across the city line at the city’s easternmost point, where Union Turnpike intersects with Lakeville Road. Here, the line runs through 272-08 Union Turnpike, a Grab & Go convenience store. At this junction, half of Lakeville Road is within Queens for a couple of blocks, where its city-owned half is known as Hewlett Street. Nearby, a few of the borough’s numbered avenues penetrate into Nassau County. 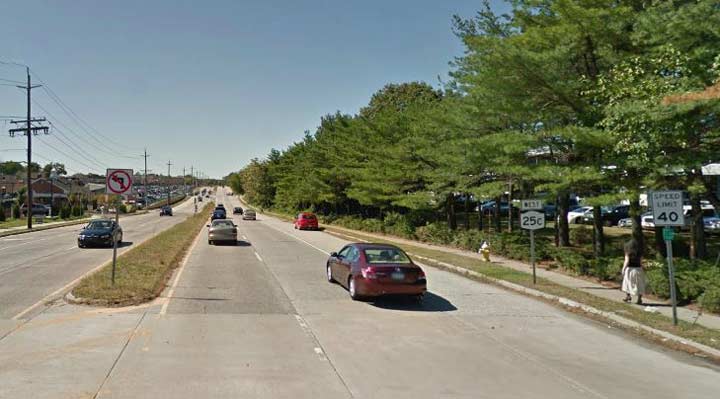 A second 25C sign can be spotted traveling westbound near New Hyde Park Road.
State and federal route markers remind me of small towns where such routes are the main commercial routes, if not the only routes in and out of the towns. Queens still has vestiges of its small-town past if one knows where to look.
1/1/15
Floral ParkNassau CountyQueens
12 comments
FacebookTwitterPinterestLinkedinEmail
previous post

Kevin, I used to be able to browse Forgotten-NY through https://forgotten-ny.com in Chrome, but since early this week I get the screen “No data received”. I finally realized you’re on Facebook, which I’m not, but by clicking the Facebook link to the Clapboard House, I got to this page and was able to send this message. I’ve cleared all my browser history, and even tried IE, but same results. I hope you can sort this out. Happy New Year!

Dunno what to tell you. I clicked the link and it went to forgotten-ny.com.

No idea what’s changed, but if I go to the top of this page, click “Home”, I see the message “No data received”. Methinks I always used to access your website through “Home”, but now I must access it through one of the articles (Now You C It), and go backwards or forwards from there. Not a big problem, but very interesting…

As of 5PM everything looks to be working as before (including “home”). Must be gremlins up here in the Catskills….

You’re right. A small part of the New Hyde Park zip code is within NYC limits in Queens.

Walt is correct. Both sides of 25C in this area have the Post Office designation of New Hyde Park. The area on the North side of Union Turnpike between Lakeville and New Hyde Park Road is the former site of the Sperry plant. It was off-limits during WW2 and for a number of years after. Part of that property was also the first location for the UN until the UN Building was built in Manhattan. The shopping center on the South side of 25C was referred to as the Lake Success Shopping Center, but always had a New Hyde Park address.

On Staten Island there is/was RT. 439 Forest Avenue which is E-W. I believe all the 439 signs are gone. 440 (N-S) graduated in the early 1970s into the West Shore Expressway and dog-legs for about 1/2 mile on 278 (S.I.E) then continues on the M.L.K. Expressway over the Bayonne Bridge. I don’t think that 440 continues into NJ since it was a NY route designation.

While Staten Island’s Forest Avenue no longer is Rt. 439, in New Jersey Rt. 439 still exists and goes until the Goethals Bridge.

I’ve always believed that not only should NY 25C be revived, but extended as far west as Queens Boulevard in Kew Gardens, and as far east as Jericho Turnpike in Garden City Park.