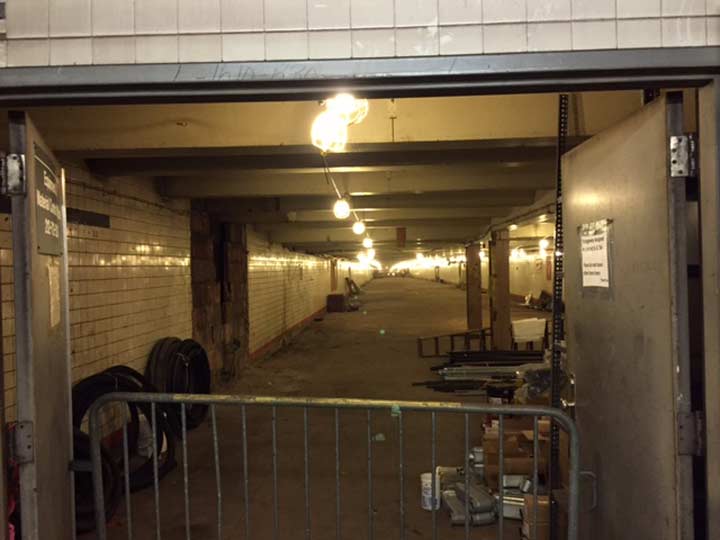 A friend was in the 34th Street BMT/IND station, which connects the R/N/Q lines, the B/D/F/M lines, and the PATH trains to New Jersey, and got this photo of a closed corridor apparently being opened up temporarily for station work.

My initial feeling was that this was the so-called “Gimbels Passageway” that connected 6th and 7th Avenues under 33rd Street and so allowed people coming in from Penn Station to walk underground to the 6th Avenue trains, but it’s not.

It is a closed passageway but it ran lengthwise on 6th Avenue from the 34th Street station north to the 42nd Street station. It was one of a number of subway pedestrian connectors that sometimes offered free transfers, sometimes not. There are lengthy passenger tunnels under 14th Street connecting the 6th, 7th and 8th Avenue lines, but today only the section connecting 6th and 7th Avenues is open. Today, a well-traveled underground walkway lined with shops, plazas and restaurants remains under 6th Avenue between 42nd and 49th Streets.

Maintaining many of the passageways, convenient as they were, became problematic in the 1970s as budget cuts pared subway maintanace down to dangerous levels. The police did not patrol them and they became homeless camps and muggers’ haunts. As Second Avenue Sagas explains, after a rape in March 1991 the 6th Avenue passageway was closed along with several other ones.

However, many of them are still there, if the city ever wants to reopen them and make them safe.

Here’s a video taken in the 6th Avenue passageway: copy and paste into a new window.

Also, the Gimbel’s passageway was much more narrow, with windows on one side.

There are so many cops and National Guardsmen in Penn Station and the Herald Square subway station now that they could reopen the Gimbels passage. It would make a lot of sense actually and be a nice thing on a rainy day.

The Gimbels passageway that was under 32nd St between 7th and 6th Ave. was a scary dungeon of sorts.

With one way in and one way out, I always found myself walking a but faster, then breathed a sign of relief when I exited the other end.

I can see why they closed it.

The Gimbels passageway also had entrances and exits to/from the basement of its namesake store. In the 60s I used it regularly to walk between Penn and the Herald Sq subway/PATH complex, but it had deteriorated in the 70s and was not a safe place to walk anymore.

I always wondered which of Dante’s ‘Levels of Hell’ this corridor most resembled.

I walked it once in the mid-70s when I didn’t get off a D at 34th Street and discovered this tunnel between 35th & 40th Streets. It was pretty empty, and I recall it had stairs at even numbered blocks. Never needed to walk it again, and never wanted to.

If the 80s it was part of a proposed Underground New York, modeled on Montreal, that would have linked up various midtown passageways and added stores & other attractions. That never went past the talking phase.

If the underground shops at the Columbus Circle station are successful, the MTA could revive this passageway as a retail corridor.

They had stores there at Columbus Circle already.

People had more space to walk and now its so narrow.

Alot the of the subway survived the 70s to 90s that can be reopened.

Every time I remember spots no longer used or torn down.

L train 6th ave having alot of space on the mezzanine level.

I remember as a kid being able to walk between the south end of the 6th Ave IND station at 42 Street to the north end of the 34th Street station through an underground corridors — outside of the fare zone. Very helpful when it was raining and I did not have an umbrella.

And there was another passage along I think 33rd Street between 6th and 7th Aves (Penn Station). This one I recall was little used, a bit dark, and potentially dangerous, so it was not a surprise when it was closed off.

And I also remember the passages connecting the various lines along 14th Street.

I remember that passage well. It was a great way to stay out of the weather when walking from Penn Station to midtown 6th avenue.It was wide and you could make faster time underground than above.I recall the passage way was even open during a transit strike .

One of the superb pieces i’ve read this week.

The passageway under 14th between Seventh and Eighth Avenues was closed when it became a hotel for the homless. Convenient when it rained and snowed.