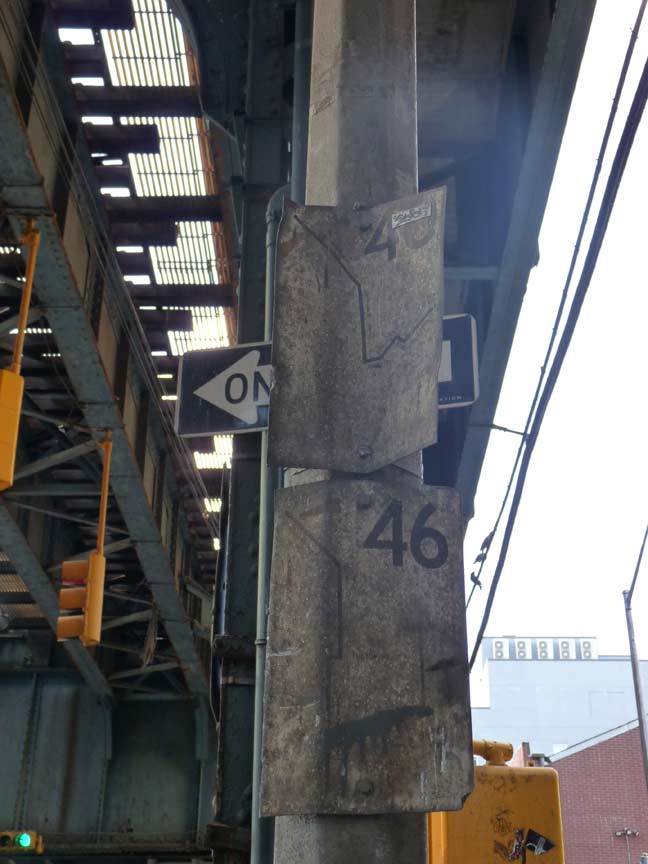 One of the earliest efforts by the Transit Authority (today’s MTA) to provide signage indicating bus routes were these very simple white signs showing the route number in large type and the routes with black lines; these first appeared in the 1960s.

Today, most bus stops have route indicators in large, round signs with expected times of arrival and indicated routes in boxes mounted in 10-foot high posts.

As I’ve been saying for some time, you find all kinds of interesting things under elevated trains, and these signs, one for the B46 and another for the now-discontinued B40 routes, are found on a lamppost just east of Broadway and Hooper Street, now illegible from steel dust and grime.

I think the B-46 was the Nostrand Ave route..Yes?

B-46 is Utica. B44 is Nostrand and these are not MTA or TA signs. They were installed by what is now the Department of Transportation (DOT). Then it was just the Department of Traffic. When Lyndsay became mayor, it became the Transportation Administration. They had nothing to do with the people who run the buses. Even today’s Guide a Ride and bus stop signs are installed by DOT, although the MTA provides the information or the signs.

There are also some B21 signs also around in better condition than what you are showing. That route disappeared on November 11,1978.