I’ll say right off the bat: there’s no such thing as a 200th Street, East or West, in Manhattan or the Bronx, but I hope here to indicate why there isn’t, or at least what’s in 200th Street’s place. When the triumvirate of commissioners drew up the grid plan for Manhattan streets in 1807 (described expertly in Gerard Koeppel’s book City on a Grid) the plan’s northern edge was 155th Street; other commissions planned the streets thereafter, as it was wrongly assumed that it would take over a century for urban Manhattan to reach that far north!

North of 155th, Manhattan gets narrower and more hilly, and while developers leveled Manhattan’s hills as the city encroached north, the uptown hills remained in place. The numbered plan was followed north of 155th, but more spottily (it eventually got into the Bronx, where it ends with West 263rd at the Yonkers city line). When it came to 200th Street, it never was laid out. 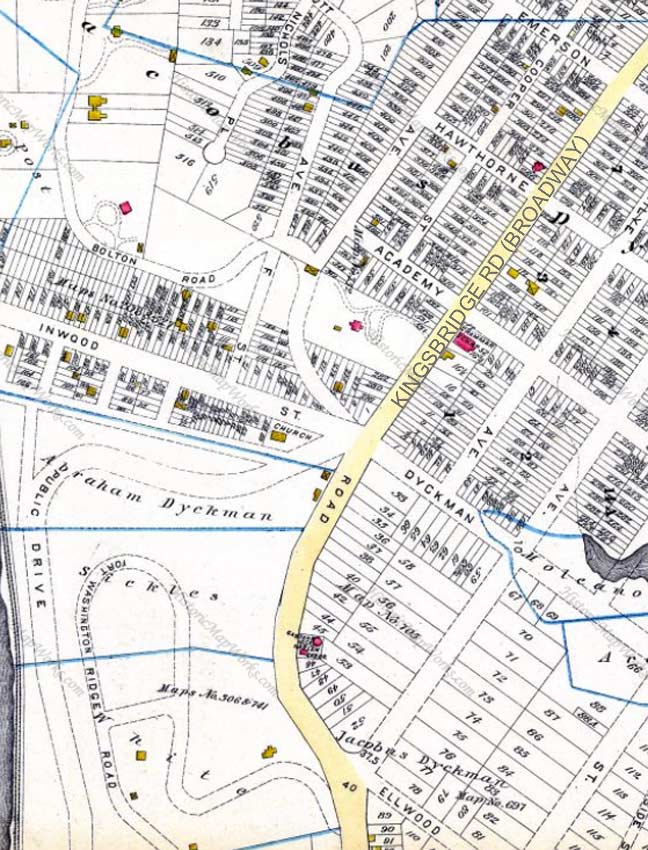 By 1883, Inwood streets had been mapped, but there was still only one existing road, Kingsbridge Road (which crossed the Spuyten Duyvil Creek at King’s Bridge, an early colonial-era bridge still in use). As you can see, some of these street names are still in use, such as Academy and Dyckman, named for a colonial-era family whose farmhouse still stands at Broadway and West 204th (then called Hawthorne Street). Dyckman Street, originally called Inwood street west of Kingsbridge Rd (Broadway) stands about in the spot where West 200th would be.

The Dyckman Farmhouse has been here since about 1785 and is Manhattan’s last remaining Colonial farmhouse. It was built by William Dyckman, grandson of Jan Dyckman, who first arrived in the area from Holland in the 1600s. During the Revolutionary War the British took over the original Jan Dyckman farmhouse; when they withdrew at the war’s end in 1783 they burned it down, perhaps out of spite.

The farmhouse was rebuilt the next year, and the front and back porches were added about 1825; the Dyckman family sold the house in the 1870s and it served a number of purposes, among them roadside lodging. The house was again threatened with demolition in 1915, but it was purchased by Dyckman descendants and appointed with period objects and heirlooms. It is currently run by New York City Parks Department and the Historic House Trust as a museum. A copy of one of the occupying British soldiers’ log huts, with a log roof, can be found at the back of the house. The cellar kitchen is particularly engaging, with old waffle irons, sausage stuffers and a child’s game board.

Presently, Manhattan numbered streets skip from West 196th to West 201st, and both of those streets go for one block or less. Manhattan has never had a 200th Street. But…there’s always a but… 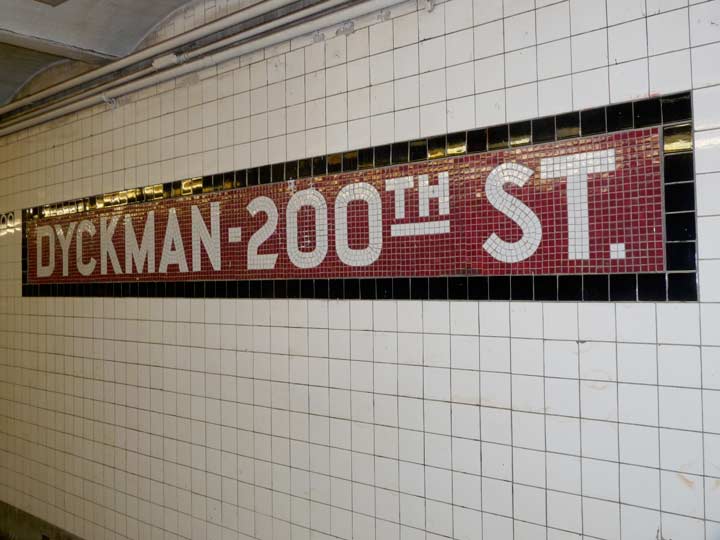 When the 8th avenue IND Subway reached Dyckman Street on September 10th, 1932, the first Independent subway line to open, the contractors saw fit to subname Dyckman as 200th Street. Perhaps there was a surplus of tiles used for the station ID plaques, and they had to do something with them. Nowhere else in Manhattan is Dyckman Street called 200th Street. 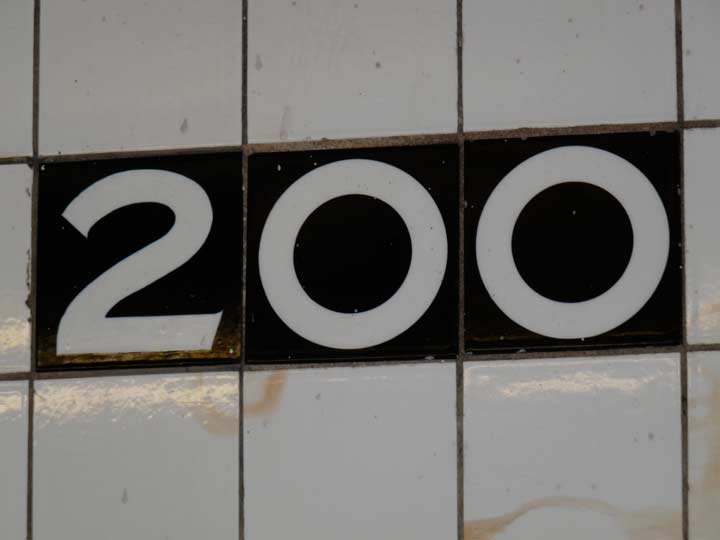 But ask an Uber driver to get you to 200th, both (s)he and the GPS will be in abject wonderment.

Geographically speaking, in the Bronx, West 200th Street would run approximately just south of the Jerome Park Reservoir. However, it was never laid out there, either. But East 200th Street in the Bronx did exist, in Bedford Park. 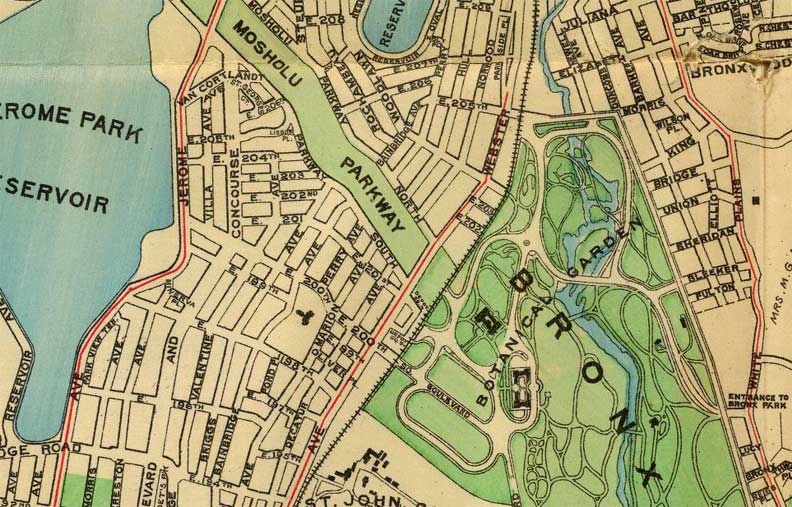 This map from 1900 shows East 200th Street, in place of where Bedford Park Boulevard is today. According to the late Bronx historian, John McNamara, 200th became BPB by 1906. Unlike Brooklyn’s Bedford Avenue, named either for the British town or the Dutch word “bestevaar” (“meeting place of old men”) Bedford Park, Bronx is named for a historical figure: Edward Thomas Bedford, president of the Bank of the State of New York — an associate of Leonard Jerome, the organizer of the Jerome Park racetrack (now a reservoir) and the grandfather of Winston Churchill. 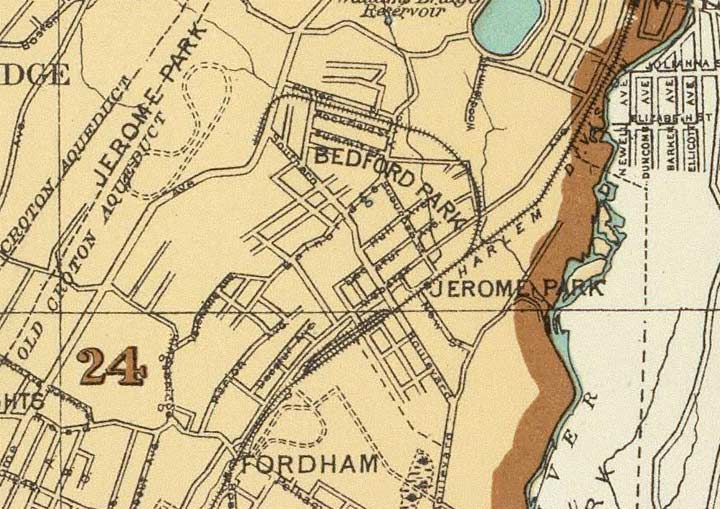 Bedford Park Boulevard’s stint as East 200th Street was short-lived indeed. This 1895 map of the Bronx, then part of New York County (the brown line is the dividing line between the Bronx and Westchester, but this section of Westcheester County would be transferred to New York County later in 1895) shows that BPB was originally a northwest extension of Southern Boulevard!

Thus, there was an East 200th Street in the Bronx for only about ten years at best.

In Queens, there’s a 200th Street, but it’s a quiet side street split between stints in Bayside and Jamaica, nothing special.

Until 1973, the old Third Avenue El station over The Bronx’s Webster Avenue at Bedford Park Boulevard was marked “200th St.” Here’s a photo:

Great photo thanks
when I was living in the Bronx, 50’s through the 60’s we referred to 200th street where the shops were and closer to Webster Ave, and the 3rd ave El. However, closer to the Grand Concourse (where Bedford PK Blvd goes into a tunnel under the underpass was situation and you could get the D train there, it is named on the subway sign Bedford Park Blvd. My parents moved in the 70’s to 250 Bedford Park apartments across from the Underpass.. so it seems it was divided closer to Grand Concourse people called it Bedford, Park actually in 1906, 200th Street was renamed Bedford Park Boulevard,

The front sign of the R12 car in the photo says “SHUTTLE”, probably because the roll did not have an “8” available. On the official subway map it was known as “Route 8” denoted in a variation of blue. The Third Avenue route in the Bronx was too long for it to be a true “Shuttle”.

Is there a spacing between streets in Manhattan as there is in Queens? That is, if there’s X feet between streets in Manhattan, and you have one street 5X feet away from another, then it’s OK to skip from say, 196st Street to 201st. Or were numbered streets mapped out all the way to 263rd, and whatever wasn’t either there already or built (or was impossible to build, given hills) just ignored?

I was raised on Post Avenue, a block from Dyckman.

I lived on Decatur Avenue between 200 th Street and 201st Street between 1947 and 1951. I never heard the name Bedford Park Blvd. used. We only knew it as 200th Street. I walked it every day up to the Grand Concourse to attend St. Philip Neri School. We moved to Gun Hill Road in 1951 and then to Wisconsin in 1952. When I returned to look around in 1999, the street was named BPB.

Actually, that’s not quite true. There do exist a West 205th Street and a West 206th Street, which each run for a single block between Ninth and Tenth Avenues. Neither of them gets anywhere near Broadway.

I grew up in The Bronx right off Bedford Park Blvd. We always referred to it as 200th Street.

The highest numbered street in New York City is 271st Street in New Hyde Park, at the Queens/Nassau border.

I recall reading somewhere that the reason Queens has so many repeated street numbers – for example, in Queens, heading east along Queens Boulevard in Forest Hills we have 67th Avenue, followed by 67th Road, followed by 67th Drive – is because the powers that be didn’t want the street numbers to get extremely high. The highest numbered “other” is 165th Avenue in Howard Beach – wonder what that number would have been if they were all avenues and not “roads” and “drives.” Anyway, I recall reading that somewhere, but I don’t remember where, and I don’t know if it’s true.

Actually, I’d read a different story: that the Queens grid was originally laid out in large, estate-type blocks. When those blocks were divided by the creation of new streets, the designations of “Road,” “Drive,” etc., were used to retain the same number: 64th Avenue, 64th Road, 64th Drive, whatever. (I just picked that particular number out of the air, and I’m sure there aren’t any duplicate streets numbered “64”!)

This would make sense, since the house numbering in Queens reflects the street grid.

Commercial maps from the 1950’s and 1960’s show the east/west streets of Broad Channel named as 188th – 208th Avenues with the north-south streets as extensions of the numbered streets in Howard Beach, except that Cross Bay Blvd occupies 100th St rather than 93rd St. This was part of a never-implemented plan to rename the streets of Broad Channel and to eliminate the courts between 163rd and 165th Avenues next to the (then) Long Island Railroad. The residents of Broad Channel almost certainly objected to the plan.

I was born in a house at 200th and Webster Avenue

And every borough has a 3rd Avenue, though Staten Island’s 3rd Avenue only exists on the grounds of the former Willowbrook NYS facility.

In the Bronx, Third Avenue is spelled out on the street signage & on maps, unlike “3rd Avenue” in Manhattan.

When there is a large distance between avenues, the suffixes Road and Drive fill in. For streets, the fill-ins are Place, Court and Lane, in that order. In fact, the city’s official maps include an extra zero (e.g. 67-099 Alderton St) because there are a few places where the distances are so great that the numbers go beyond -99. On the above-mentioned block of Alderton St, the numbers go as high as 67-215.

I’ve seen maps of Manhattan where Dyckman St, as well as Thayer, Alden and Sickles St, are named West 200th St. down to West 197th St. Elwood St. is not explained by this, as West 196th St. intersects it. All of these streets do not follow Manhattan block numbers. At 10th Av, we find 1 Dyckman St, rather than 500.