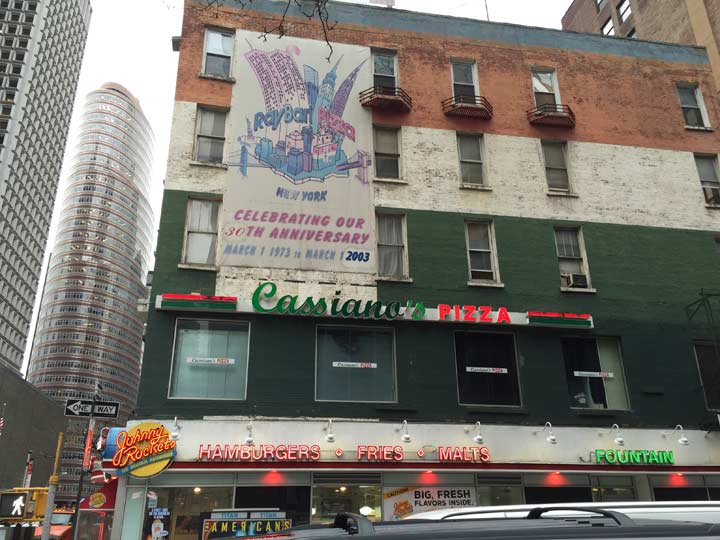 Sicilian immigrant Joseph Bari opened his first pizzeria in 1973, purchasing a –what else — Ray’s Pizza at 3rd Avenue and East 76th Street and renaming it for himself, in the grand tradition of Ray’s Pizza, Famous Ray’s Pizza, Original Ray’s Pizza and other pizzerias named Ray’s that became a NYC tradition since Raffaele “Ray” Cuomo opened the first Ray’s on Prince Street in 1959. I don’t know the social engineering that goes into naming every subsequent pizzeria for Ray, but there you have it.

The last Yelp review for Ray Bari at 3rd Avenue and East 56th Street was in 2011, and I assume that was the year business came to a close there. The space is now leased to Cassiano’s (which is full of mirrors, like Ray Bari’s was — the last thing I want to do when eating pizza is look at myself ) and a branch of the Johnny Rockets chain. Years ago, Bari painted the building in the Italian flag tricolor, which remains.

What also remains is the Ray Bari anniversary sign, which was last changed in 2003. I imagine Joseph Bari or his family still own the building and hence the sign remains.

LAST OF THE SCROLLS, Riverdale

I never did understand why the colors on that building are horizontal when the Italian flag has them vertical.