One of my favorite apartment complexes in NYC, London Terrace, takes up the entire block between West 23rd, West 24th, 9th and 10th Avenues — one of the few developments in NYC that can make that claim. The complex, built from 1929-1934, consists of over 1700 apartments in 14 connected buildings and was considered the largest apartment complex in the world when completed. The units surround a private garden and residents have access to a swimming pool and health club. One-bedrooms are in the $3,000s. 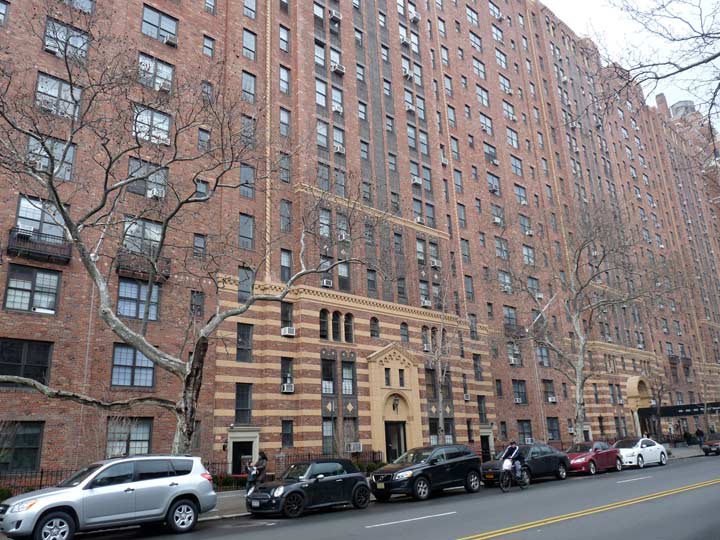 Developer Harry Mandel began acquiring land in this block in the late 1920s and construction began in 1929. The complex was named for an earlier development built in the 1840s that was also known as London Terrace, as they were built to look like typical London apartments at that time, known as flats in Britain. Much of the property was leased from the descendants of Clement Clarke Moore of “A Visit from St. Nicholas” fame. Though the Moore family had a colonial-era residence in Newtown, now Elmhurst, Queens, Moore inherited his grandfather’s estate, “Chelsea,” and resided there the rest of his life until his death in 1863 at his summer residence in Newport, Rhode Island, He resisted the relentless grid plan that was under construction in Manhattan in midcentury, but donated 66 acres that became today’s General Theological Seminary.  His great-great grandson, also Clement Clarke Moore, laid the cornerstone for the new London Terrace in December 1929 and rental units first became available in mid-1930. The complex was constructed by the architectural firm Farrar & Watmough. 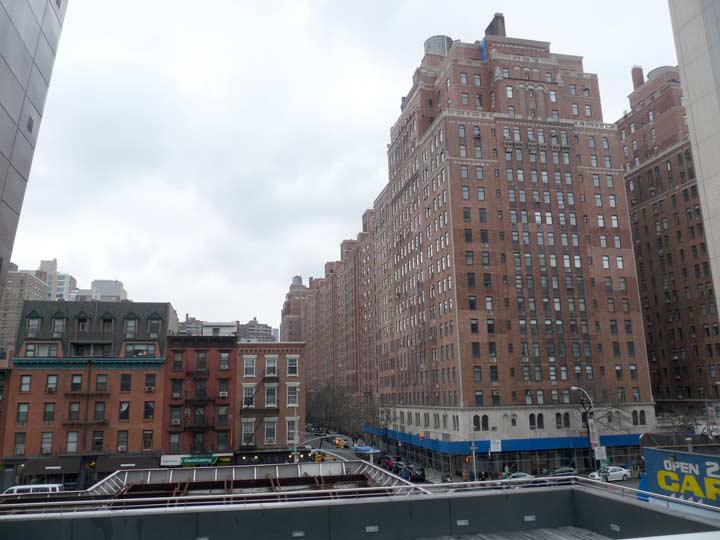 Farrar and Watmough completed the mid-block buildings facing West 23rd and 24th Streets by 1931, while the exterior buildings facing 9th and 10th Avenues were finished in 1934. Unfortunately the Great Depression occurred just as the building began construction, and it fell into default in 1934. Developer Harry Mandel was wiped out in 1932, losing a fortune of $14 million, about $240 million by today’s reckoning. Ultimately, though, London Terrace became a financial success because of its proximity to the brand-new 8th Avenue IND Subway. The 9th Avenue El also ran past it for about a decade after completion. 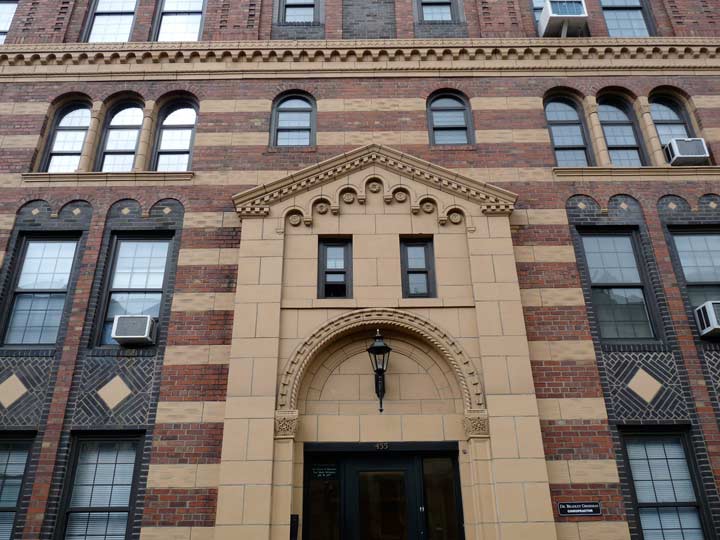 Presently London Terrace is operated as two separate entities, London Terrace Gardens on the side streets (one entrance is shown here) and London Terrace Towers on 9th and 10th Avenues. As mentioned, High Line Park is now nearby and the region is rapidly gentrifying, for better or worse. An area highlight is the Half King, a bar/restaurant on West 23rd near 10th opened by adventure author Sebastian Junger and is home to literary readings. 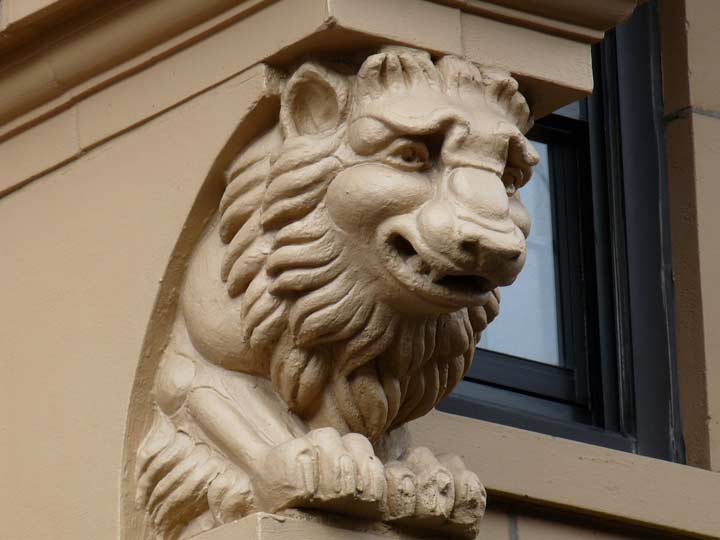 In the AIA Guide to NYC, authors Norval White and Fran Leadon say:

This vast buff brick pile, in proto-modern planar style with faintly Gothic verticality, is actually two rows of connected apartment buildings flanking a block-long private garden. The name comes from a row of four-story houses that once stretched along the same 23rd Street frontages, facing the 18th Century Clarke mansion. When the building first opened, the doormen were dressed as London “bobbies” as a play on the name. 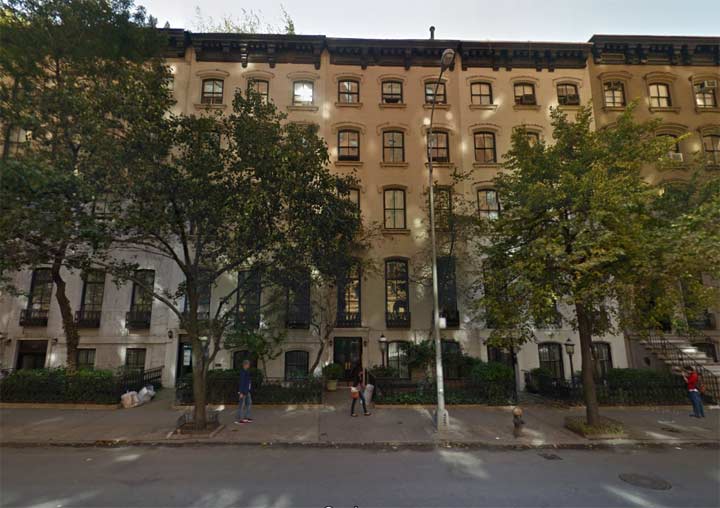 On the south side of West 23rd Street, facing London Terrace, you will find a handsome row of attached Italianate townhouses at #428-444. These were all built between 1855 and 1860 and were among the last parcels of Clarke’s estate that were opened for development. Just east of the development at what is now #420 was his birthplace, and according to legend “Visit” was composed when Clarke was inspired by a visit at one of the townhouses. Doubt remains that Clarke even composed “Visit.” 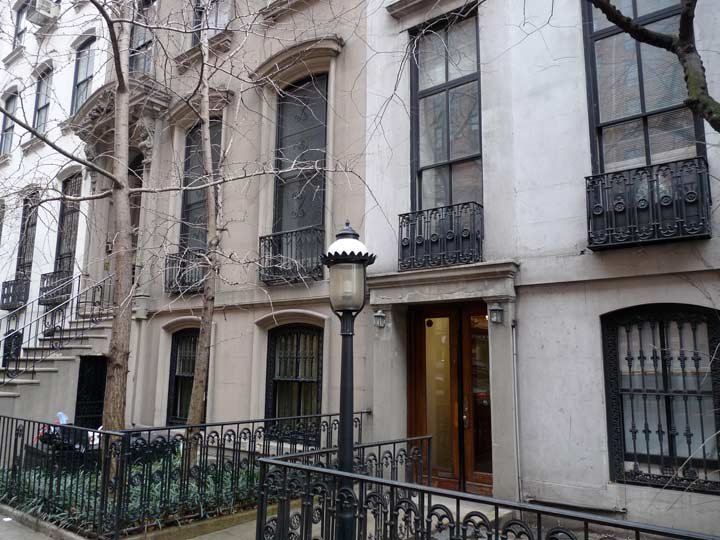 Collectively, the townhouses are now part of a co-op complex called Fitzroy Place. Supposedly, they were so-called with an eye to area history, as Fitzroy Road was a colonial-era thoroughfare that ran in the path of today’s 8th Avenue, over a block to the east. However, if that’s true, it might have been better to call it the Abingdon, since 23rd Street occupies the roadbed of another colonial-era path, Abingdon Road.

Thanks for this! I had wondered about this complex for some time.

I did hear that the doormen at this complex are dressed just like the palace guards that stand in front of Buckingham Palace, though I’m not sure that this is the case anymore or that they will stand still no matter what you do them just like their counterparts over there.

The link to London Terrace in Kevin’s first paragraph includes a photo of the faux “Bobbies” who once guarded the complex. They disappeared long ago.

I lived somewhere in this massive ziggurat during my infancy and early toddlerhood (1934-1936), after which my Folks emigrated me to the Kingsbridge neighborhood of The Bronx. Being slow, I recollect absolutely nothing about my early life at London Terrace, but I suppose it was pretty nice. My Pop’s 1934 Federal tax return reveals that his entire 1934 gross income would barely cover a month’s rent for a one-bedroom apartment today — and he was well paid, for the time! But he saved on trolley and el fares for a couple of years because he could walk to work, at West 27th and 8th.

Hi Vail, Yes it is! We still enjoy the indoor swimming pool. 🙂