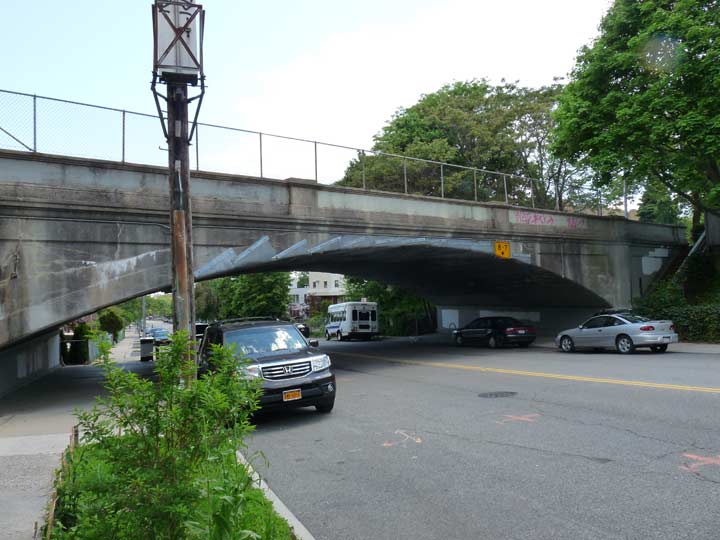 The Seeley Street Bridge  is one of NYC’s “secret” bridges, in that it doesn’t show up on maps; I’ve only found a couple more like this, such as the cast-iron Eagle Avenue Bridge that spans East 161st Street in the Bronx, or the bigger Grand Concourse bridge over East 173rd Street. The bridge spans Prospect Avenue, which cuts through a deep valley and makes a turn to the south. Engineers must have thought it better to just bridge Seeley Street over Prospect Avenue when the street grid was bring built, instead of making it ascend and descend a steep grade.

From you I get the story.
Thanks Kevin!

This is an area where three street grids intersect, actually they overlap. There’s the western Brooklyn grid, with its numbered streets and avenues which comes up to Terrace Place (actually on the old border between Brooklyn and Flatbush) with some reaching across Seeley to Vanderbilt Street. There’s the local Windsor Terrace grid from the 1850s which parallels that of Parkville to the south. And there’s the 1870s southern Brooklyn grid with the “east and west” numbered streets, East 2nd through East 5th terminate at Vanderbilt Street and East 7th at Reeve Place.
The bridge was built circa 1903 to connect two pieces of Prospect Avenue. Originally Prospect Avenue dead ended at the old city line. When the 1870s grid was laid out it provided for the extension of Prospect Avenue south to Ocean Parkway, occupying the space where East 6th Street would have been. The section between Ocean Parkway and Vanderbilt Street was developed, but owing to a very steep slope and the fact that the two sections didn’t actually line up, the north and south sections remained separate. Circa 1903 the city, desiring a direct route between the Hamilton Avenue ferry and Coney Island, acquired the land at the present sharp bend between 11th Avenue and Terrace Place to open Prospect Avenue all the way through and reconstructed the roadway. The resulting cut through the hill necessitated bridging Seeley Street over Prospect Avenue.
The area between 11th Avenue and Terrace Place had once been sand pits. Later the Pilgrim Laundry with its landmark smokestack stood on the west side of Prospect, with the east side occupied by 1930s era gas stations. (I’m thinking Texaco and Sinclair) Today that block sports clusters of Fedders Specials.