In the history of Forgotten-NY there have been certain roads that have not received their own page by virtue of their fame, making it is easy to presume that nothing is “forgotten” about them. Such an example is Manhattan’s Park Avenue, a metonym for old-money urban living.

Originally planned as Fourth Avenue on the 1811 Commissioners Plan, it received its railroad tracks in the 1830s. In 1875, the tracks in the middle of Fourth Avenue were depressed into a trench and covered, resulting in nearly three miles of green traffic medians between Grand Central Terminal and 96th Street. In honor of this transformation, Fourth Avenue was renamed Park Avenue and it quickly became the sought-after address for New York’s high society, along with nearby Fifth Avenue.

At 96th Street, the topography dramatically changes from Carnegie Hill down to the plain that hosted Harlem Creek before its burial. Here, the railroad emerges to the surface, running atop a stone embankment towards Harlem and points north. On this northernmost of traffic island, the median widens and allows for seating in a design that hearkens to the past. 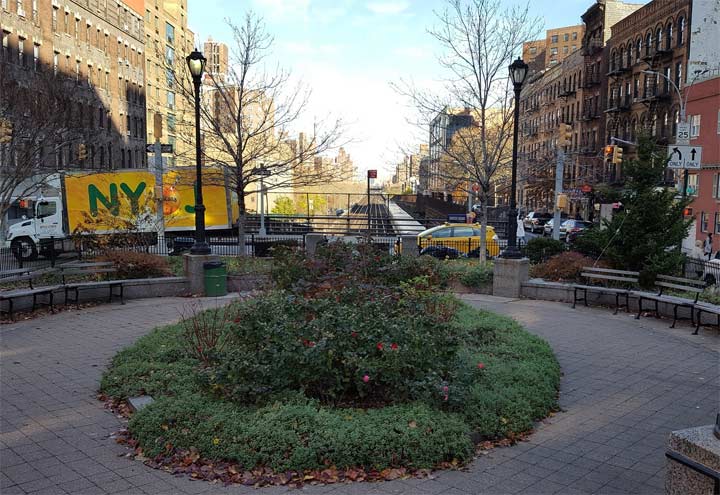 Completed in 2006 by the architecture firm Abel Bainnson Butz, the elliptical seating areas capitalize on unbostructed views of trains entering and exiting the tunnel portal. The median between 96th and 97th Streets is the only one on Park Avenue that allows for park-like seating. The rest are here for show but there was a time when Park Avenue was truly a pedestrian-friendly linear park, the first of its kind in the city.

On each block, circular holes allowed for ventilation in these tunnels with vegetation serving as a buffer against train noise and smoke. Steam trains were not banned on Park Avenue until 1903, when electric and diesel trains took over. Coincidentally that year the stations on 59th, 72nd, 86th, and 110th Streets were abandoned after facing competition from the nearby Third Avenue El. 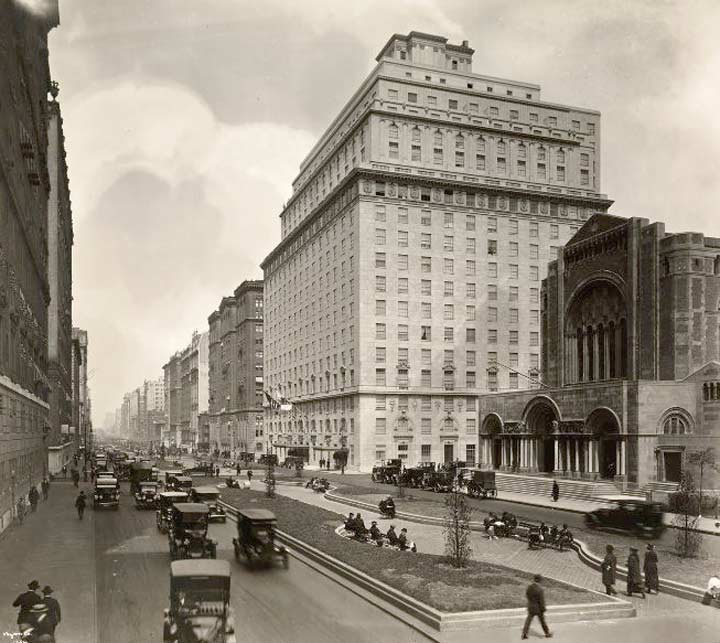 It was around that time that the circular skylights were covered and the filled spaces were transformed into seating areas along a mid-Avenue pedestrian path. New York has plenty of linear parks today, such as the High Line, Aqueduct Walk, Ocean Parkway, Eastern Parkway, and Vanderbilt Motor Parkway, but Park Avenue was the oldest example of this category. In the above photo from the MCNY collection, the landmarked Saint Bartholomew’s Church overlooks the avenue. 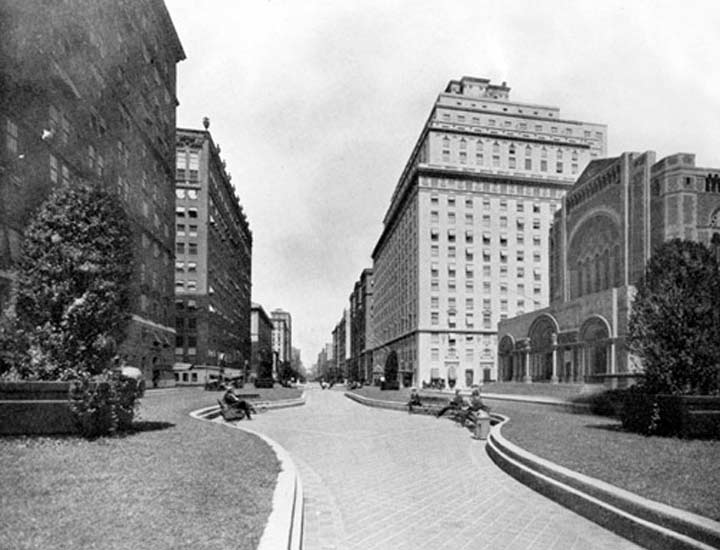 Unfortunately with the increase of automobile traffic, the edges of Park Avenue’s medians were shaved in 1927 to allow for a third lane in each direction. From that point, the parks of Park Avenue were no longer accessible for long-term enjoyment. Certainly they have their beauty with trees, flowers and sculptures, but there’s no place to sit. From the 1930s to 1970, Park Avenue was designated as New York State Route 22, a series of connected roads running from Houston Street to the Canadian border. 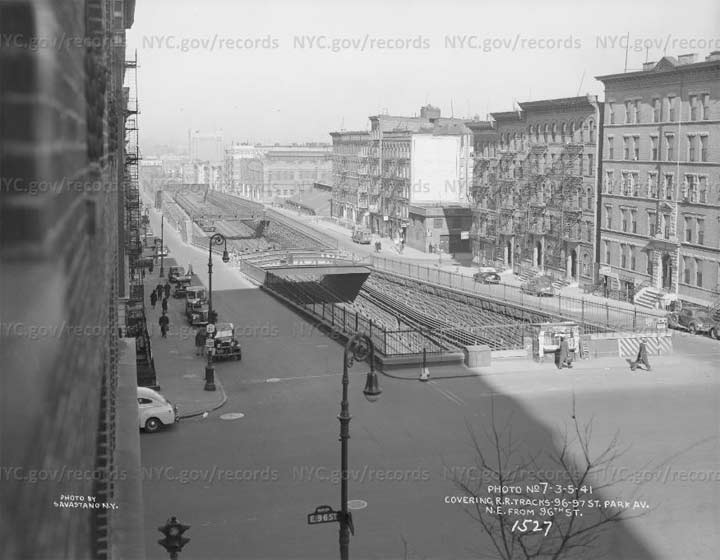 In 1941, the tracks on the slope between 96th and 97th Streets were covered, creating the northernmost median on Park Avenue. 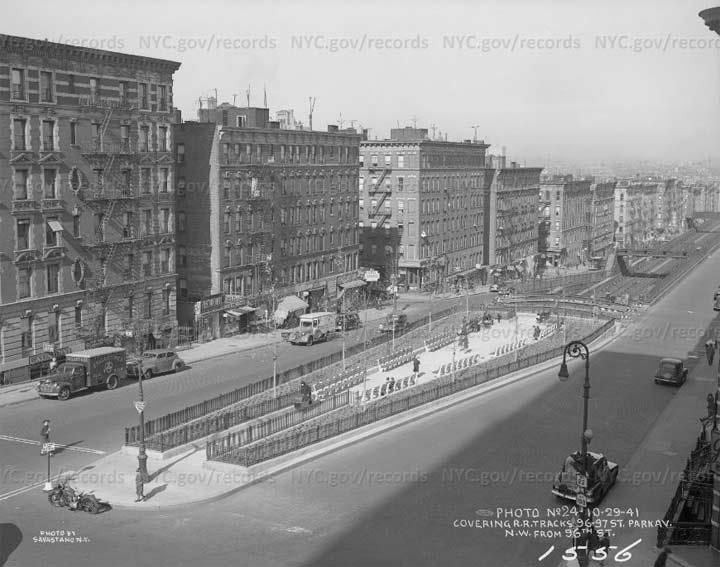 Initially it was a bland affair comprising of a plaza with rows of benches facing opposite each other. The pedestrian drawbridge at E. 98th Street would later disappear, making the next crossing of the tracks going north at E. 102nd Street. Photos of this block before and after 1941 are from the Municipal Archives collections.

With the 2006 transformation of the space, a small reminder of Park Avenue’s past is open to the public. Occasionally, there is talk of giving Park Avenue a “road diet” by expanding the medians once more. For now, motorists continue to fiercely defend their three lanes in each direction as many of Manhattan’s other avenues and Broadway had their traffic lanes shaved in favor of bike lanes and pedestrian plazas.

Two notable women designers had their impact on Park Avenue: architect Clara Coffey and sculptor Louise Nevelson. In 1970, nearly four decades before the Parks Department introduced the Parks Without Borders program, Coffey removed the tall fences and hedges on the medians. Her design made these mini-parks more visible to pedestrians and motorists. 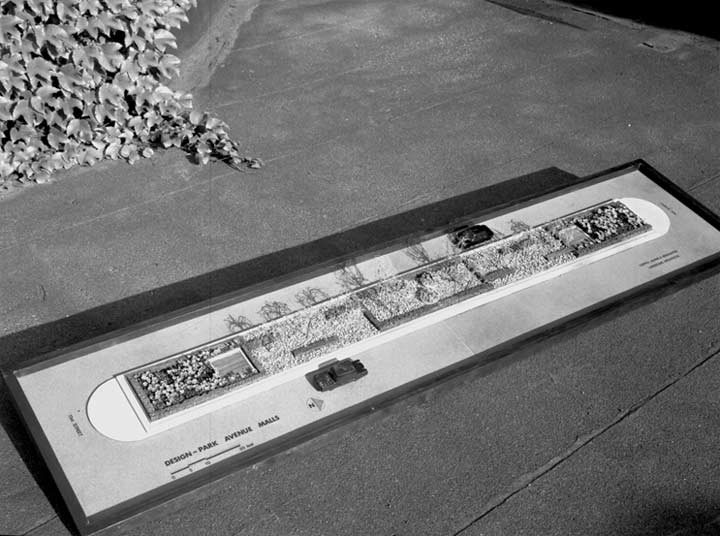 Funding the 51 medians from 46th to 97th Streets; the five medians between 34th and 39th, and the 19 medians from 14th to 33rd Streets isn’t cheap. This is where the conservancy groups step in. For its last 10 blocks, Carnegie Hill Neighbors picks up the tab and further south it is the Fund for Park Avenue, both of which plant the tulips, light  the Christmas trees, and install temporary sculptures. 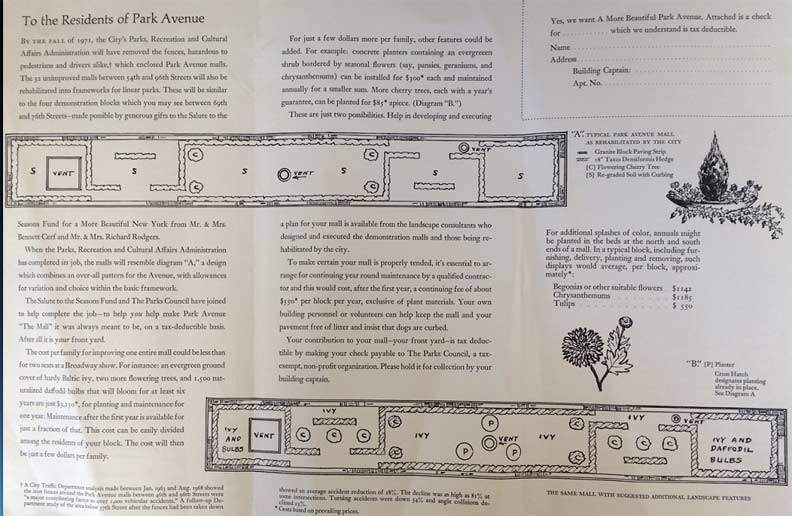 Artworks on the Park Avenue Malls come and go but there is one sculpture that is permanent, located near the highest point on the avenue: Louise Nevelson’s Night Presence IV. Originally installed at Grand Army Plaza in 1972 by the Public Art Fund, it was relocated to Park Avenue two years later. Copies of this work can be found at San Diego Museum of Art and the University of Wisconsin-Madison Elvehjem Museum. 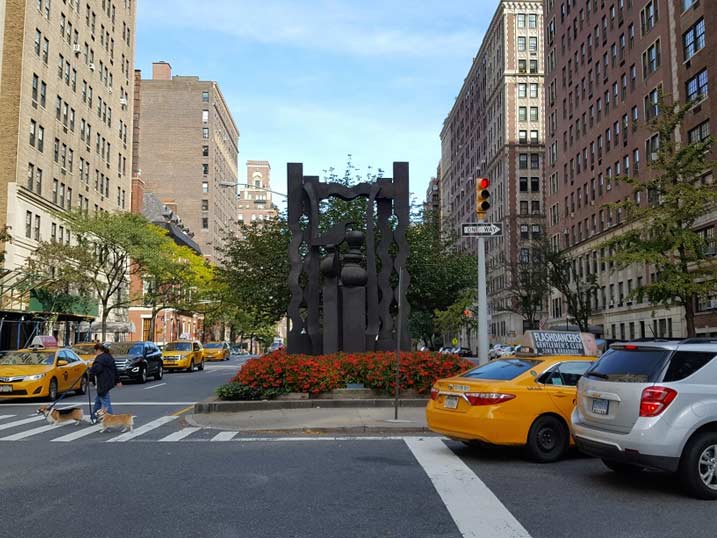 Uptown from the seating area, the brownstone embankment resembles a medieval wall. The avenue descends towards 107th Street and then rises again towards 116th Street. This wall is a vertical habitat of resilient plants that grow out of the crevasses between the stones. The embankment was constructed in 1875 in tandem with the Park Avenue tunnel below 96th Street. 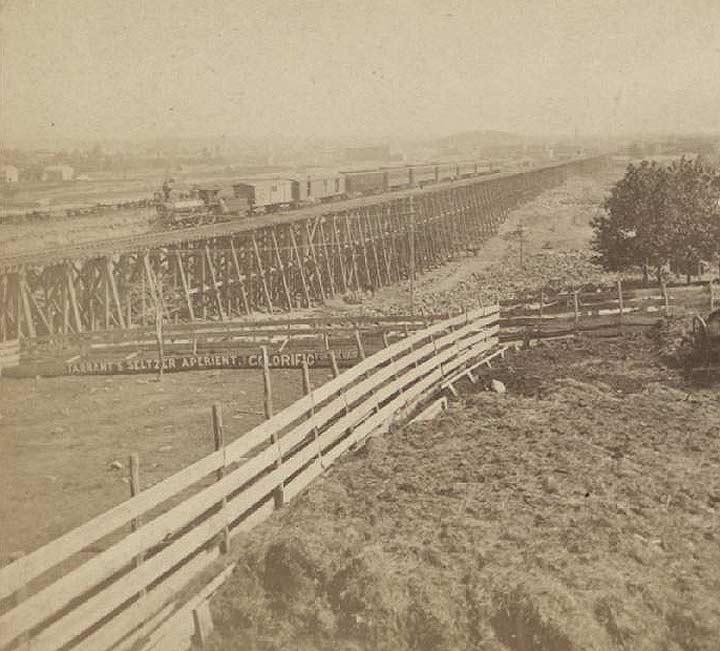 This dip in the landscape was once much deeper and had Harlem Creek running through it. In this 1870 stereoscopic view looking north, the stone embankment had not yet been built and trains bound for Midtown ran atop an Old-West-style wooden trestle. The hilltop on the left side of the tracks is Snake Hill, also known as Mount Morris, the rocky centerpiece of Marcus Garvey Park. 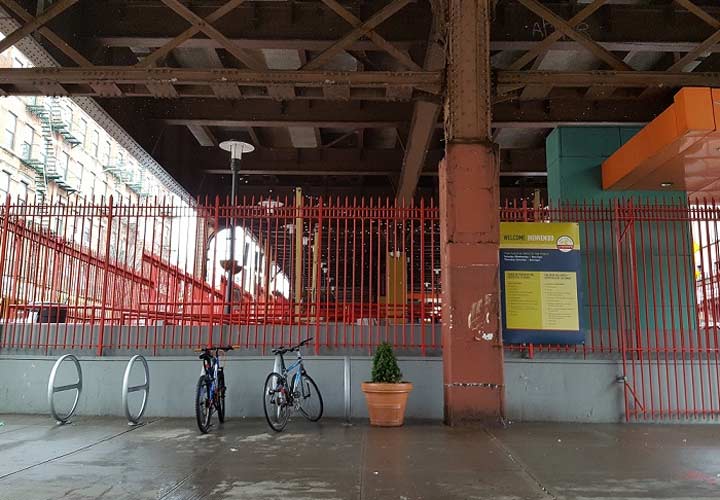 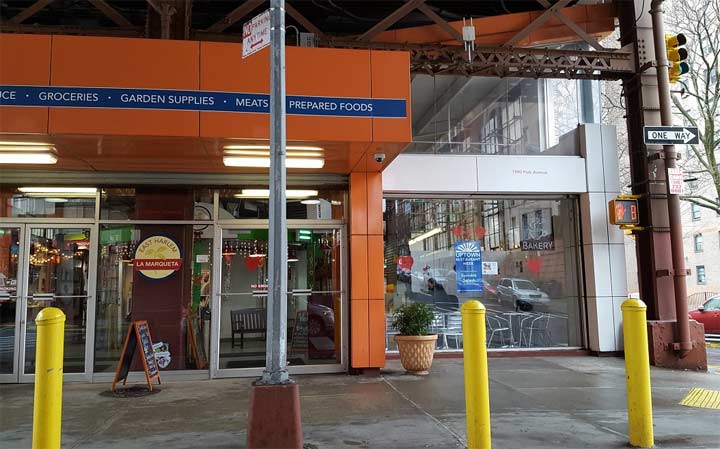 To the north of 111th Street, the tracks run as an elevated line similar to the prewar elevated subways that paralleled it on Third Avenue and Second Avenue. La Marqueta occupies the space beneath the tracks. 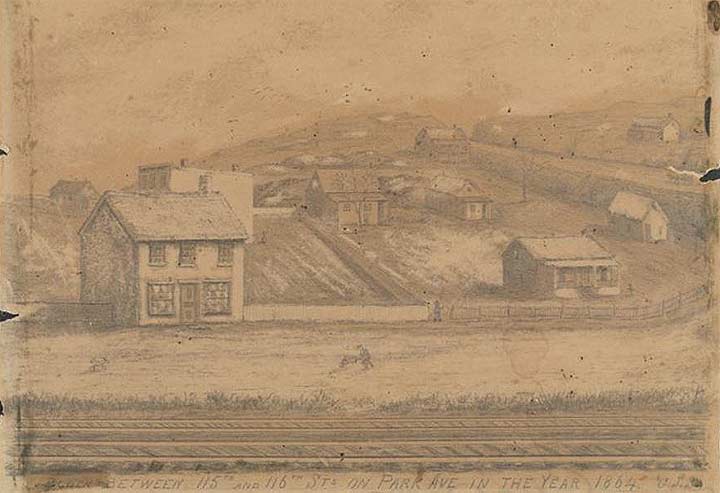 The earliest view of 116th Street and Park Avenue is an 1864 pencil sketch from the MCNY collection showing the tracks running at grade. 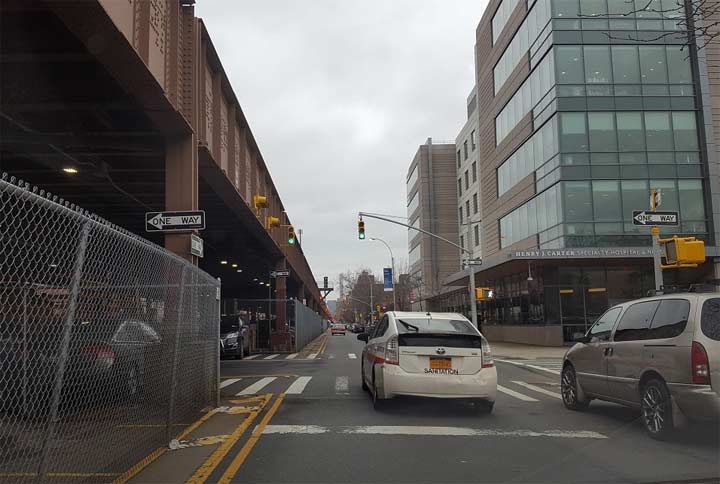 There is certainly plenty to write about concerning Metro-North’s other Manhattan station at Harlem-125th Street, but I’ll let the railroad’s blogger Emily Elizabeth Moser tell its story. As much as Forgotten-NY has documented Park Avenue, Kevin’s previous highlights include the annual Summerstreets event that opens the Murray Hill Tunnel and Pershing Square Viaduct to pedestrians and bikes, a building on Park Avenue that recalls its previous name, its unique lampposts, and my contribution: the little-known Park Avenue of Queens.

Steam trains were banned in the Park Avenue Tunnel due to a law passed in 1903, after a serious accident in January 1902 killed 15 people when two steam-powered trains collided in the tunnel just north of Grand Central Depot. In 1906 electric trains began using the Park Avenue tunnels. Steam-powered trains had to couple to electric locomotives in order to enter Grand Central. Local commuter trains began to use multiple unit cars (similar to subways) around the same time. Diesel trains were not used in those days, because diesel locomotives were not developed until the mid-1920s, and did not become widespread until after World War II. Should also note that the diesel locomotives that ran, and continue to run, into Grand Central have always been dual- mode locomotives, meaning they use third rail power inside the Park Avenue tunnel and switch to straight diesel power once they are outdoors.

Also note that stations on 59th, 72nd, 86th, and 110th Streets were abandoned around 1903 after facing competition from the nearby Third Avenue El. Don’t believe there was a station at 96th Street, but there was one at 72nd Street as well, which was not mentioned. Go to this link from https://www.nycsubway.org/wiki/Metro-North_Grand_Central/Park_Avenue_Tunnel for more details.

I wonder how far under Park Avenue the Metro North Line tracks are ?