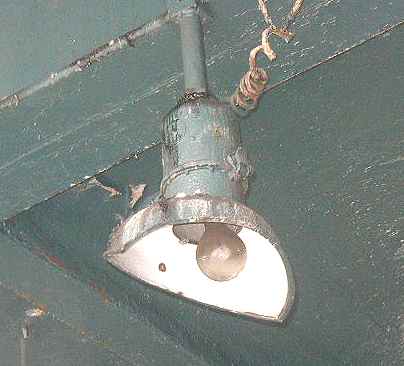 There are still a few of them left and some are actually working.

“Crescent moon” style luminaires, called “crescents” because of their shape, were in vogue from the mid-40s until they were replaced by mercury vapor lamps in the early 60s. The “crescent moons” were very flexible in that they could be used both on standalone cast iron poles, wrought-iron masts attached to telephone poles, or on the new finned masts that started to come in in the late Fifties.

A few working “Crescent Moons” can still be seen in New York City on railroad underpasses in out of the way areas, but these are becoming fewer as the years go by. There are still areas where extinct ones still hang on, though… 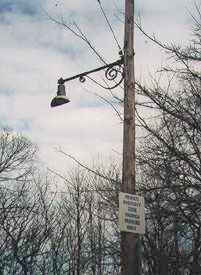 This “crescent moon” is part of a set that were found in a church parking lot in Little Neck, Queens in 1999. They hadn’t worked for quite a few years. The mast it hangs on has been generally put to use over the past few decades to hold orange fire alarm bulbs. 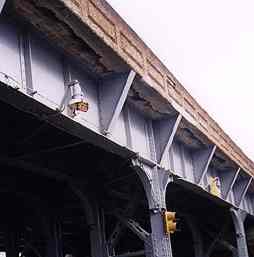 They carry incandescent lightbulbs whose candlepower can’t compete with mercury and sodium-style lightbulbs that have been used on city streets since the Sixties. The lamp at right probably dates from the 1930s or earlier.

At last inspection in 2011, they were there no longer.

This set of “crescent moons” can be seen in Van Cortlandt Park in the Bronx, just as you get off the train. They haven’t been used in many years and are waiting for a park restoration to go to streetlamp heaven. The side streets of the outer boroughs used to be lit with thousands of these style lights.

This pathway is a forgotten route in itself; it leads to the interior of Van Cortlandt Park and if you follow it far enough you get to the abandoned Putnam branch of the NY Central Railroad. 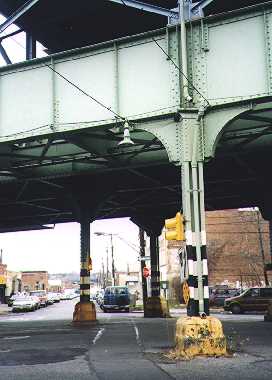 A couple of “crescents,” neither of which work anymore, can be seen on the trestle under the Dyre Avenue station, the last stop on the #5 line. At left is the corner of Dyre Avenue and Light Street.

This section of the #5 line was once the New York, Westchester & Boston Railroad. 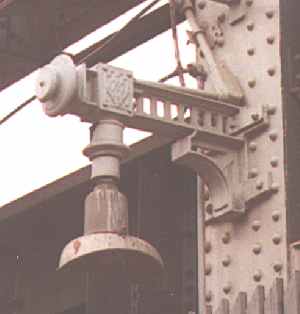 The Manhattan Bridge had dozens of Moons on its walkways on either side from the 1940s until the 1980s. The walkways closed in the 1960s, and the Moons fell into disuse and were finally removed. Note the detailing on the masts – I was sad to see these go in the 1970s.  In 2001 the south walkway was reopened with brighter lighting. Photo: Bob Mulero