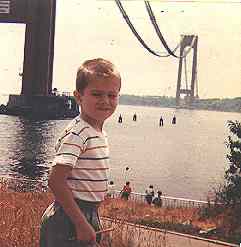 My name is Kevin Walsh. After a 35-year residency in Bay Ridge, where I witnessed the construction of the Verrazano Bridge as a kid, I moved to Queens to be closer to a job as a copywriter/graphic designer at a well-known direct marketer in Long Island. That job has disappeared but FNY has endured.

I had been noticing ancient advertising and unremarked-upon scenes in New York City for years, but it wasn’t till I moved to Flushing and saw the ancient remaining Victorian and older buildings that stand among the cookie cutter brick apartments that I put two and two together and noticed there was no one out there who was really calling attention to the artifacts of a long-gone New York.

FNY began principal photography throughout 1998 and launched in March 1999.  Within weeks, it was profiled by David Kirby in the New York Times, and FNY began a slow yet steady build in readership.

In 2006, HarperCollins published Walsh’s book Forgotten New York: Views of a Lost Metropolis, which is, as of 2011, in its 5th printing.

Do you recall a Subway TV ad done by believe or not “Evil Knievel”? He had moved to NYC and they got him to do an ad where says I’ve jumped cars and the snake river canyon but I don’t play with subway doors. Those things are dangerous”. A bunch of friends who were in high school in the 70s remembered it but we can’t find online. In retrospect, it was somewhat humorous given the fact that he broke every bone in his body but was fearful of subway doors.

I would love to get in touch with you. My mom and I lived above the hardware store in one of the pics you posted about Flushing circa 1980. I just had a dream last night about that apartment and am hoping you can help me with an address or anything that can help me track down pics. Thank you!!!

Hello…I have been searching for information regarding a hardware store owned by my father in the 1960’s (not sure if exact dates.) I believe the address was 188 eckford, Greenpoint across from the school P.S. 34. I’m trying to find the name of the store and hopefully a picture. any info you might would be greatly appreciated. Thank you!

I’m a NYer who lives so very far away (Iowa) and FNY means a lot to me. Thank you Kevin.

Hi
I’ve got old photo of Ny I think
I’m just wondering
Is it queens boulevard ?
Or I am wrong ?
I would like receive ur opinion.
Where I can publish the photo?
Thank You in advance

I’m trying to pretty up my front yard, while throwing some much needed light. I’m looking for a good source for an old or antique street lamp. any ideas or suggestions where to find some old street lamps?

Any idea about the cow statue on top of the 7-11 at Hillside Ave and Springfield Blvd?

Interested in a photo of the tea room at the mobrary in Kew gardens. Mentioned in the tour of Kew Gardens From 2011

I am a former New Yorker living now in France. I just stumbled upon your site. Thanks to the web’s aptitude for getting distracted. Glad I did. Can you put me in a newsletter mailing?