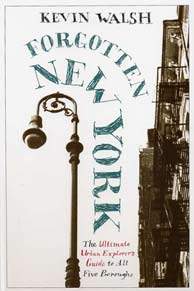 Forgotten New York: Views of a Lost Metropolis was published by HarperCollins in September 2006. It is presently in its 5th printing.

“There have been numerous books published which present exhaustive overviews of New York City and environs, but “Forgotten New York” is the first to focus exclusively on the vanishing details which once defined the metropolitan area. So much of the larger urban picture is made up of small but significant specifics — street furniture, architectural subtleties, physical or geographical characteristics of particular neighborhoods — that when they begin to disappear, the entire fabric of the neighborhood, and the larger urban area, are affected. Kevin Walsh has spent a lifetime defining, finding, and chronicling these elements, and “Forgotten New York” is devoted to remembering them, in the interest of understanding the continuum of the larger picture via its changing landscape.”

–Nigey Lennon, author of the Frank Zappa biography “Being Frank: My Time With Frank Zappa”, and “The Sagebrush Bohemian: Mark Twain in California.”

“Instantly my favorite guide to the city. Walsh has a phenomenal eye and an almost fanatical attention to detail.” (Luc Sante, author of “Low Life” )

There are no more nooks nor crannies in NYC left to find hidden gems. Kevin Walsh has found them all. (Stan Fischler, author of “The Subway and The City” )

“This is a wonderful guide to Gotham old and new by someone who really knows his stuff. Invaluable!” (Kevin Baker, author of “Strivers Row“)

“Mr. Walsh grew up in Bay Ridge, Brooklyn, where he accompanied his parents and grandmother on wide-eyed walks and bus rides through the streets of Bay Ridge and Borough Park, learning as a child not merely to see but to notice. He also experienced, at the age of 7, the destruction of a whole part of Bay Ridge when the Verrazano-Narrows Bridge was built by Robert Moses. That taught him a lot about urban loss. Early on, his course was set. He got the idea for his Web site in 1998…”  (Francis Morrone, “His Kind of Town,” New York Sun)