Throughout New York, lampposts are mounted on walls under special circumstances. Sometimes, there is not enough room on a narrow sidewalk to safely install a complete lamppost. At other locations, the city fears that truck traffic into a building garage is sufficiently great to not risk placing a lamppost on the sidewalk. And, at other times, an alleyway is simply deemed unworthy of a complete lamppost, so a wall bracket is installed to provide at least some light.

In the early 20th Century the conventions of the era led castiron lamp designers to copy the styles used on ful lampposts, and we’ll concentrate on that aspect here. Later, these lamps became more utilitarian (and therefore boring) in nature. 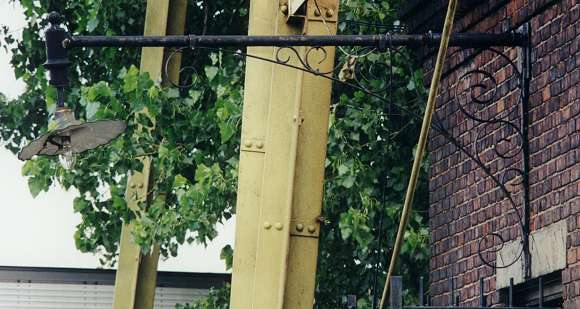 This extremely ancient dinosaur among lampposts is on Van Dyke Street in Red Hook, Brooklyn, guarding the entrance to a shipyard. At one time, NYC had dozens of such cast iron masterpieces jutting from brick walls. They were used primarily in tight spots where there’s no room for a lamppost installed at a curb. This one is unique among the ones that remain in that it has kept its original radial-wave diffuser and incandescent bulb.

It’s no longer unique — copycat brackets, complete with new radial wave lamps, have been installed on the Beard Street Warehouse and other waterfront Red Hook locales. 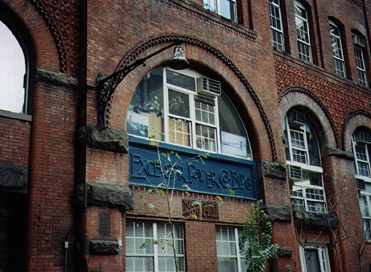 This cast iron wall bracket is on Gold Street and Edens Alley in the Fulton Market area in Manhattan, on the Excelsior Power Company Building. As an added attraction, the gorgious blue Excelsior sign is mounted next to it.

These wall lamps, and other castiron NYC lampposts, are classified by catalog. In 1934, the NYC Bureau Of Gas and Electricity (which like today’s Department of Transportation) was responsible for streetlighting) published The System Electric Companies: Photographs of Street Lighting Equipment As Of November 1, 1934. The pamphlet gave code numbers to every type of streetlight in NYC, identifying 76 types! Of those 76, only 19 have representative samples today.

The pamphlet classifies these as “Type G” wall brackets, since they match the “Type G” “Corvington” stanchions, without the shafts. 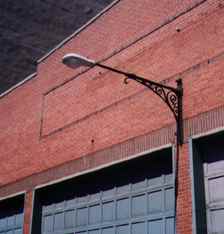 Modern times, and the high powered sodium lights made necessary by crime, have taken their toll on this wall bracket, on West 25th Street near Tenth Avenue. Most of the painstaking cast iron work is still there though. 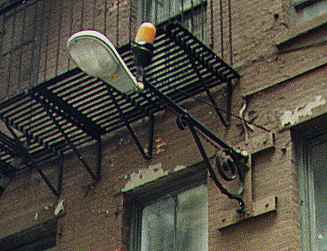 The presence of an orange fire alarm light on this wall bracket gives it an unusual appearance. It’s on Stone Street and Mill Lane in lower Manhattan. This cast iron arm is used in the city on telephone poles to support orange fire lights, but in this case, it carries a sodium streetlight. The building on which it is supported is one of the last old residential buildings left in lower Manhattan, though Battery Park City has spurred a residential renaissance over the past few years.

8/2000: Recent Stone Street renovations have cost this lamp both its sodium and fire alarm lamps. The mast is still there. 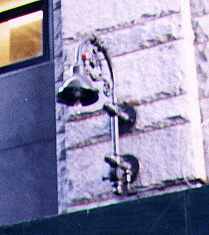 This unusual wall bracket lamp on Nassau Street near Beekman (near the Brooklyn Bridge) is one of the few bishops-crook style wall brackets remaining. Again, many more of these kind of lamps used to hang from buildings in NYC, but this may just be the last Mohican! 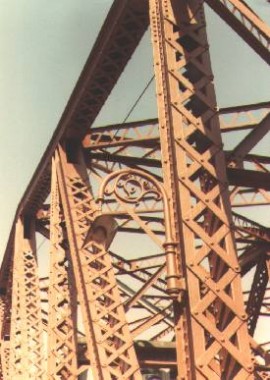 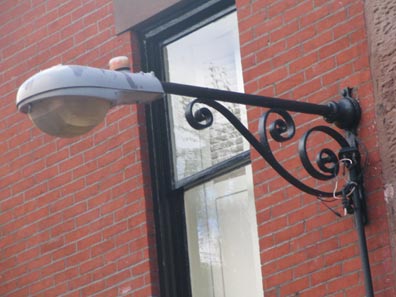 Sadly, the incandescent light on this cast iron wall streetlamp in Hunts Lane in Brooklyn Heights has recently been replaced by a modern sodium diffuser. The cast ironwork remains, however. 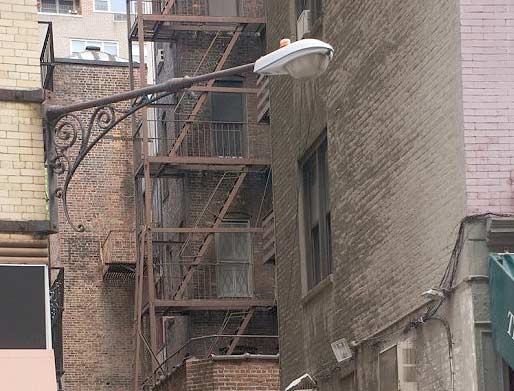 No one can say why it is named after Broadway, which is on the other side of town. 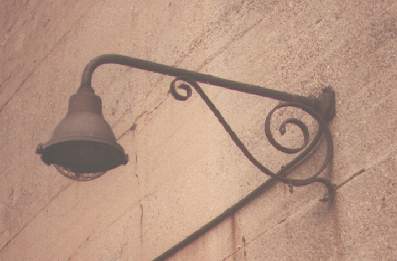 The connecting railroad that leads from Penn Station through Astoria into the Bronx and connects with the Amtrak line to Boston passes over several Queens streets. Originally, these wall brackets, unused for decades, lit the shadowy areas underneath the trestles. There are about a half dozen of these left in Astoria. 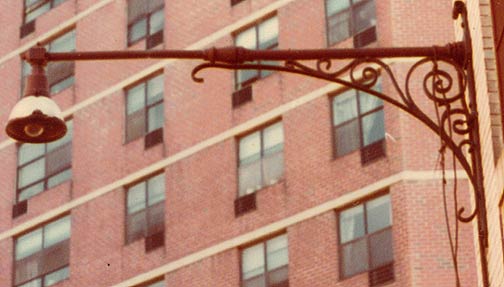 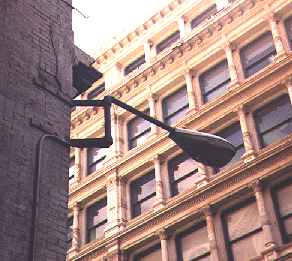 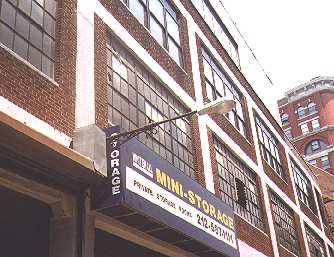 This Type G is nearly obscured by awnings on West 10th Street between Washington St. and West Street. 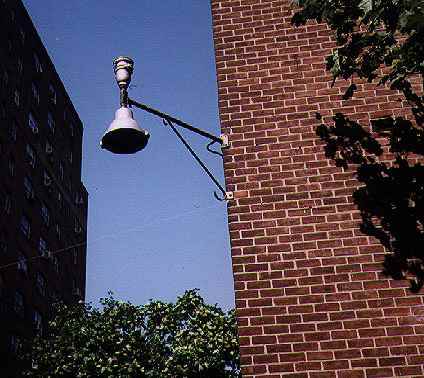 This simple, no frills wall bracket lamp is mounted on a building on the corner of Broome and Cannon Streets on the Lower East Side. The structure on top of the diffuser once held an orange fire alarm lamp.

Cannon Street itself, which once ran between Grand and Houston Streets on the Lower East Side, has mostly been eliminated by housing projects, and exists now only as an obscure alleyway between Broome and Delancey Streets. 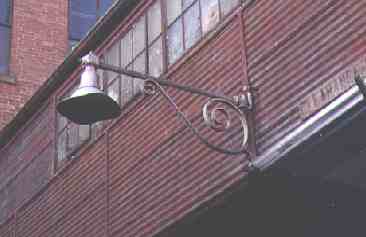 A battered lamp in College Point has been attached to an overhead walkway. Most likely it hasn’t lit up for 25-30 years. 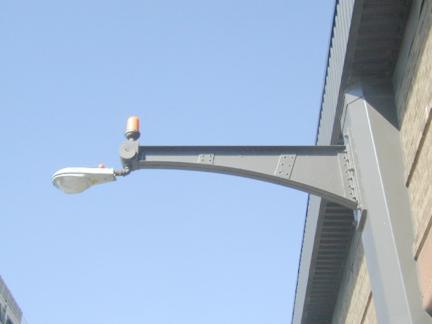 Vintage (1930s or 1940s) wall lamp, one of a flock of such lamps on a warehouse between Greenwich and washington, north of Spring. This one is complete with an orange fire alarm light. 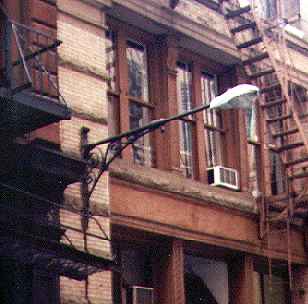 Till its removal, this one can be found on narrow Thomas Street near Hudson… 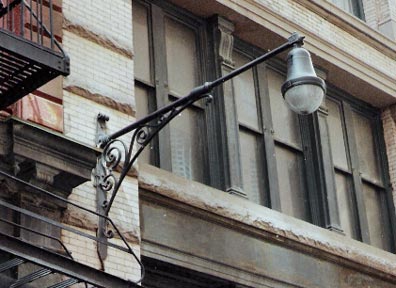 …and here’s what it looked like in the 1970s, when it still had its old Bell luminaire. 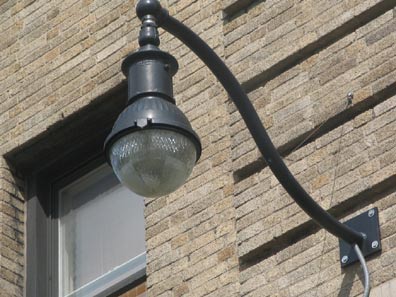 A very interesting development on a house at St. Nicholas Avenue and West 168 Street in Washington Heights: a retro-Gumball with old school curved mast. I hope this catches on around town. 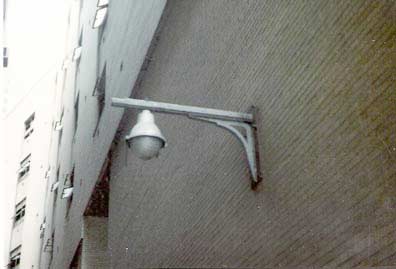 1950s wall fixture on JP Ward Street near the brooklyn battery Tunnel. This is a wall version of the upright lamps on the ramps. 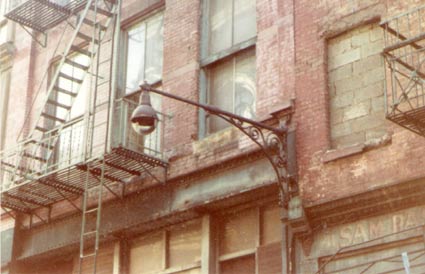 The title card above depicts a Type G wall bracket on Wooster Street near Canal, outfitted with an unusual mercury luminaire (these glow a greenish-white.) This is the same post in 1978 with gumball luminaire.  Photo: Bob Mulero 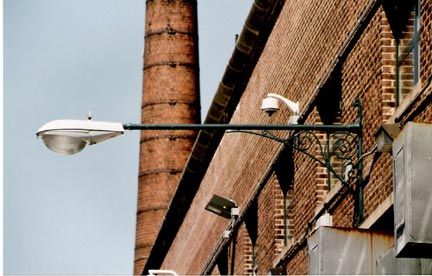