Throughout the five boroughs, there are scattered some streetlamps that look as if they didn’t eat their spinach during their formative years. Their growth seems stunted.

Actually, the city has valid reasons to install such short poles. The above pictures were taken in the vicinity of 23rd Avenue and 82nd Street near LaGuardia Airport. Lampposts in the immediate vicinity of airports are much shorter, so pilots will not mistake them for airport and runway lights in foggy or snowy weather. 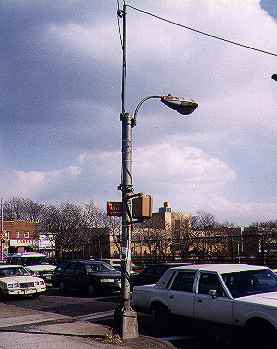 In other cases, short poles are a reminder that the elevated train network in New York City is less than it once was.

The short pole above stood at Jamaica Avenue and 136th St at the Van Wyck Expressway.

The Jamaica Avenue elevated, the J train, once ran along Jamaica Avenue to 168th Street. In the late 80s, the line was rerouted and submerged along Archer Avenue to connect with the IND at Parsons Boulevard.

Until then, Jamaica Avenue had a collection of short-poled streetlamps that fit under the el tracks. The tracks came down in 1978, but the city hasn’t gotten around to installing regular-size poles in some cases.

2nd. Liberty Avenue and 80th Street, Ozone Park. An example of a dwarf pole in its home environment.

3rd. Occasionally, mutant Dwarves appear. This one on Seneca Avenue and Palmetto Street in Brooklyn has to curve around the station platform.

4th. This 82nd Street dwarf has a short mast but a regular-size shaft.