REMAINS OF THE THIRD AVE. EL

Not much remains of the Third Avenue Elevated, which ran from Chatham Square, in the City Hall area, all the way to Gun Hill and White Plains Roads in the Bronx, from 1878 to 1955. The Bronx section of the Third Ave el, designated the #8 train (though few knew about it since the “low-V” cars that ran on the line lacked signage on the front) ran from the Hub (East 149th Street and Third Avenue) to Gun Hill Road from 1955 to 1973 when it too passed into history.

(1973 saw the removal of two ancient features of the NYC subways: the grade crossing on the Canarsie Line and the remaining section of the Third Avenue El).

Probably the Third Avenue El’s most famous film appearance was in the 1947 film The Lost Weekend, in which a desperate Ray Milland struggles down Third Avenue, looking for a pawnbroker to hock his typewriter, desperate for money for another drink.

Deep in the heart of the 149th St IRT station (#2, #5 lines), in a room accessible from the platform only through a locked door,appear two tiled signs pointing to the Third Avenue el, which ran from this station until 1973. They pointed to staircases that would allow a transfer from the subway to the el. 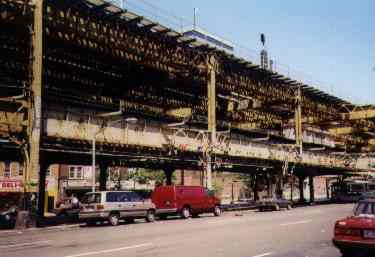 There are two decks of tracks on White Plains Road just south of the Gun Hill Road station (#2,5). The old Third Avenue El used these tracks as its terminal station. As a matter of fact, signage from the old station can still be found on its platforms, which of course are inaccessible to the public.

By summer 1999 the MTA had removed all signage and traces of the old Gun Hill Road Third Avenue El station from this platform. 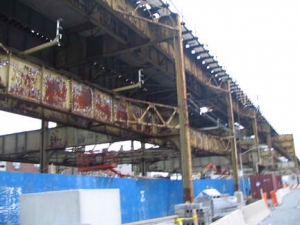 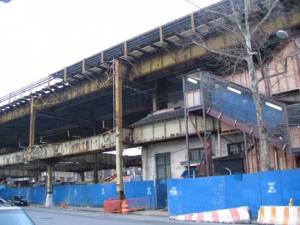 (Above two photos) in 2005 the MTA was dismantling the last of the Third Ave El tracks underneath the IRT White Plains Road line. 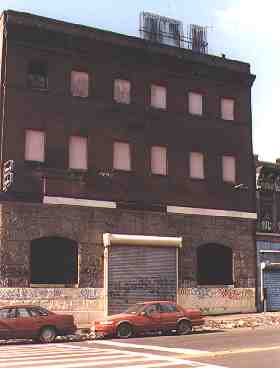 BUT…some excellent pictures of the Third Avenue El in its final days, including the final day of operation as well as the el’s destruction, can be seen at William Palter’s excellent collection of pictures, which can be accessed by clicking here. Don’t miss it!

Courtesy Michael Bates, here’s a ride up the 3rd Avenue El in the 1950s set to a Haydn concerto: 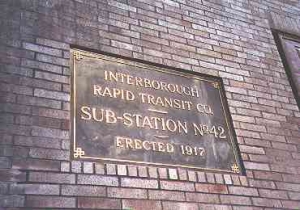 A nondescript building on East 57th near Lexington Avenue was once a Third Avenue El substation.

When the Bronx portion of the Third Avenue El closed in 1973, a free transfer to the Bx55 bus was substituted. This continued until 1996, when the Metrocard afforded free bus/subway transfers throughout the system.

Thanks for visiting the site!