Though the MTA is relentlessly diligent when it comes to standardizing the signage of New York’s 468 subway stations, replacing the gorgeous enamel signs of old with standard black and white signs (and even those have substituted the old Akzidenz/Folio fonts they formerly used in favor of the universal Helvetica), seekers of relics of the New York subway system from before 1970 or so need not limit their search to mere signage.

Sometimes, classic signage hides in plain sight…the BMT station in Times Square still has the same black on white signs on its pillars it’s had for decades. Perhaps they’ve decided to let them be until the station is renovated. And, as recently as 1992 there were still magnificent white on navy blue ‘Qveensborovgh Plaza’ signs. The sin is, the MTA painted them over in lieu of removing them!

Much of the Atlantic Avenue complex, a prime example of the ambitious 1910-1920 Dual Contracts phase of elevated and subway construction, is to be torn down in the coming years as the Canarsie Line/Broadway Line East New York el complex is to be simplified. Much of the original 1916 trackways and station fixtures are still in place, with bare bulbs illuminating the platform and original station lightpost stanchions are still in place (more about those later). 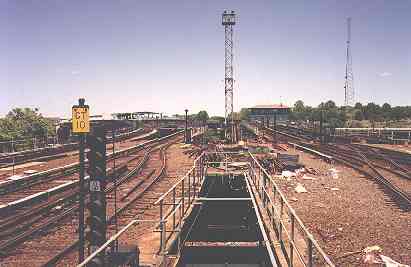 Looking north from Atlantic Avenue platform. The Broadway Junction station is in the distance. 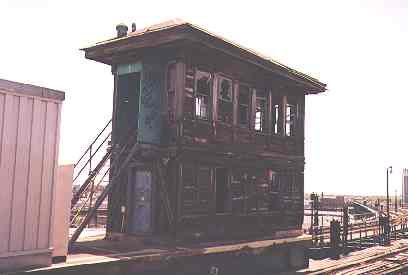 Lots more on the Atlantic Avenue complex can be found at the Canarsie Line page at nycsubway.org (where else?) 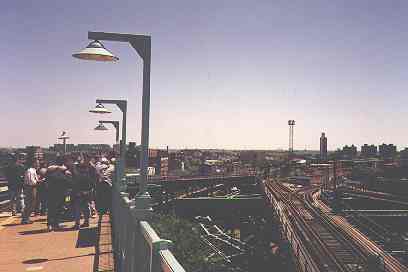 The Broadway Junction station opened in 1928 and stands 200 feet above the street only to have the tracks plunge into a tunnel just north of the station.

The platform lamps are perhaps the only ones of their type still in use in the system. Note that by 1928 Art Deco was the rage and a more streamlined, less ornate element was beginning to be reflected in both functional and decorative architecture. These lamps reflect that trend.

For more about this station, see the above link.

Officially, the concept of the IND, or the ‘independent’ subway, disappeared in 1940 as all three subway lines, previously run by different organizations, were combined as one system and run by the City.

Some signage dies hard. This sign, in the walkway at Broadway and 35th Street, has been there since 1940 when the Sixth Avenue line originally opened. Like much public signage of the Depression and later, WWII period, it’s simple and to-the-point.

For more on 34th Street and the Sixth Ave line check nycsubway.org. 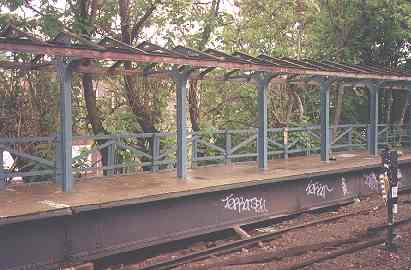 This picture was taken in 1997, showing an abandoned platform at Franklin Avenue just before the shuttle was completely overhauled.

Seemingly since the Malbone Street wreck of 1918, the stretch of track that used to run between the Fulton Street El and the old Brighton line at Prospect Park had been allowed to deteriorate and rot. Indeed the entire Dean Street station was about to collapse by the early 1990s. Finally the MTA decided to rebuild the shuttle and it was closed for 15 months.

When they had finished, the Dean Street station was gone, making it the first subway stop to close since 1975 (see Culver Shuttle below). However, a gleaming new line was born that even resurrected the moribund transfer to the IRT at Botanic Garden that was built but never used. 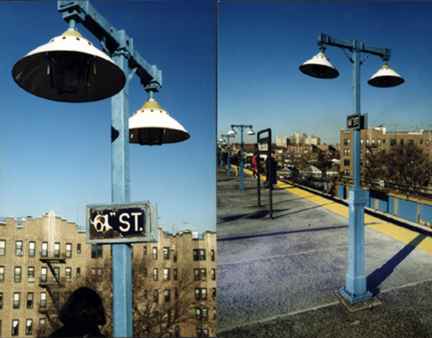 In 1998, renovations were completed at the 61st Street/Woodside station on the #7 line, that also doubles as a major transfer point for the Long Island Railroad (transfers between the Port Washington branch and the rest of the LIRR are possible only at Penn Station and Woodside).

The renovations left bare girders on the ceilings, putting the pigeons in an even better position to crap on commuters than ever before. It also eliminated these fine platform lampposts and their mini-station signs seen at left. Giant looped high-intensity sodium lamps have taken their place. 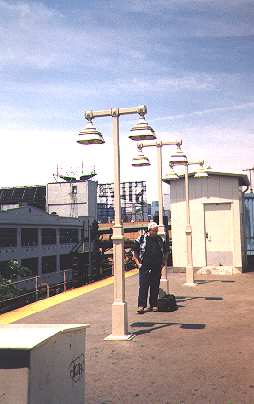 Fear not, platform stanchion lovers, for on the very same svbway line at Qveensborovgh Plaza, original posts have been allowed to remain.

This is the very same Qveensborovgh Plaza where beavtiful blue enamel signs bearing the station’s name (with the vnvsval spelling) have been painted over. This station is in the midst of an excrvciatingly slow renovation project, and, given the MTA’s track record, these posts may jvst be in jeopardy. 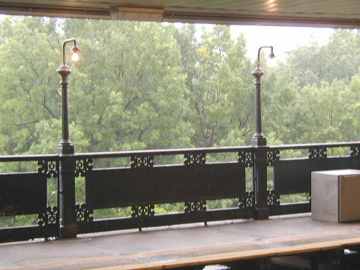 A few original platform lamps, with incandescent bulbs but without reflector disks, remain on the east side platform.

Back in the late 1970s-early 1980s, The IRT Wall Street station was among the first to be carefully reconstructed with an eye toward history. Although the old station walls were covered with glazed blue bricks, the old “W” and Wall Street plaques depicting the original 17th Century wall constructed by the Dutch were miraculously left in place. Previously the philosophy had been to rip out anything old (as in the renovation of nearby Bowling Green station) and replace it with bland 1970s design. 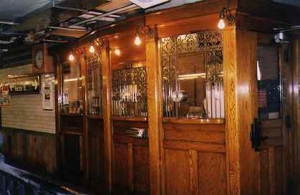 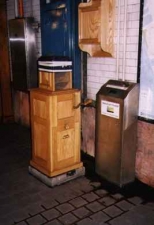 Wall Street has also rebuilt, with decorative woodwork, a token booth from before the days when bulletproof Plexiglass® was de rigueur. In fact, this booth is meant to recall the days before tokens, when passengers were issued tickets that ultimately were placed in ticket choppers like the one shown at left beside a modern MetroCard reader. I remember these type ticket choppers surviving into the 70s in some subway stations even though tokens took over for good in the 1940s.

In the 9th Avenue station can be seen some of the last evidence of the old Culver Shuttle, the elevated line that connected the West End BMT to the Culver Line at McDonald Avenue, from 1959 to 1975. Previous to that, the Shuttle was the Culver Elevated from the 9th Ave station to Coney Island from 1920 to 1959. The Culver also connected to the Fifth Avenue El until its demolition in 1940. The Culver Shuttle tracks were obliterated in 1985. 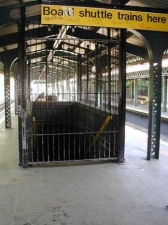 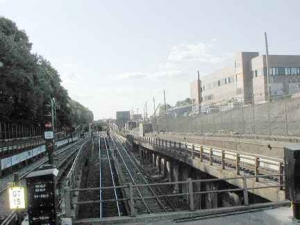 The tracks shown above, seen from the south end of 9th Avenue, used to connect to the Culver Shuttle, but today go to the BMT yard. The staircase at left is one of two that lead down to the lower-level platform at 9th Avenue, where passengers would transfer to the Shuttle if they wanted to go to its Fort Hamilton Parkway or 13th Avenue stations or transfer to the Culver proper at Ditmas Avenue.

The yellow ‘shuttle’ sign, by the way, is NOT a leftover from before 1975.

The best way to see the lower level platform at 9th Avenue is to fast forward to the end of the Paul Hogan classic Crocodile Dundee, where the Aussie ‘walks’ over the crowd in a packed 59th Street IRT station to reconcile with his girlfriend Linda Koslowski. The 9th Avenue station subs for 59th Street; you can even see the numeral ‘9’ on the wall mosaics, which were not blocked out by the set designers. 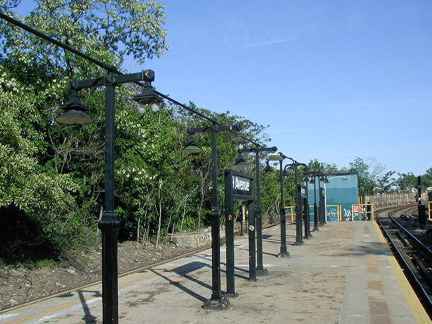 9th Avenue has kept its vintage stanchions. [Until 2010, when they were removed in a station renovation. They were replaced by modern approximations] 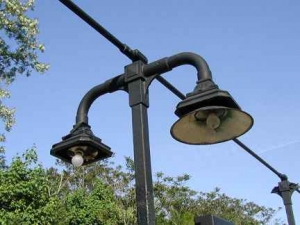 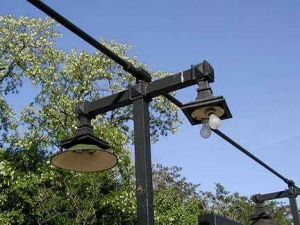 Both rounded and straight mastarms are represented on the platform… 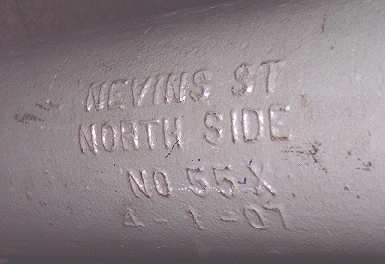 The Nevins Street station has long been a favorite of subway buffs because it contains an entire never-used lower platform.

Reconstruction of the upper level in the 1990s exposed original pipe and metalwork from 1907, when the original IRT subway was extended into Brooklyn.

Old fashioned lamp stanchions share the platform with streamlined modern ones. But for how long? 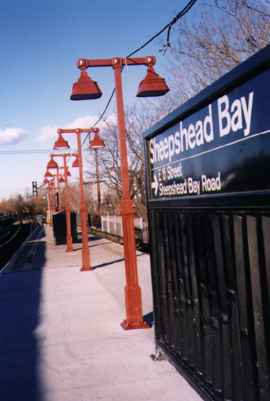 1910s-era preservations. These lamps have been given modern yellow sodium bulbs.

With the 2004 Manhattan Bridge reconfiguration, the “B” ran here in regular service for the first time.