It might be argued, mostly by people who’ve never been there, that Staten Island has mostly alleys and nothing else. In fact, most of Staten Island by now has been thoroughly suburbanized and landscaped, with regular, rigid street patterns imposed, especially in the southern sections of the island.

By 1912, most streets in Staten Island no longer carried their original names. Nothing new here, though…the other four boroughs have also experienced similar street naming shifts. 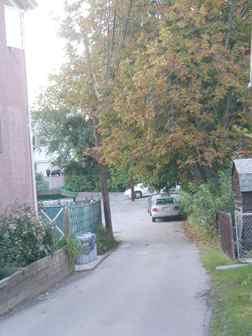 Rosebank, a neighborhood in Staten Island’s southeast section, is in the shadow of theVerrazano-Narrows Bridge, is one of Staten’s older neighborhoods and contains many one-block lanes. One such lane is Bang Terrace (see below). 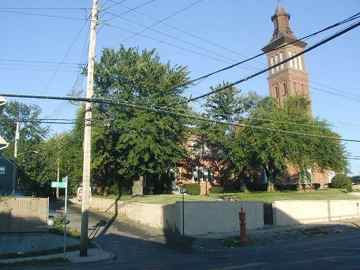 Church Lane is a very narrow street alongside St. Mary’s Roman Catholic Church, which dates to 1857. Its bell tower can be seen from all over Rosebank and adjoining Clifton. (The first Catholic church on Staten Island was likely St. Peter’s in New Brighton, but its present distinctive church building was begun in 1900. St. Mary’s at the very least is among the oldest Catholic churches on the island.

Bang Terrace is a very short lane in Rosebank. Only its street sign gives it away as being more than a driveway. Unusually for an alley, it has a slight S-curve. As for its unusual name, it’s probably from a former local property owner.

Fingerboard Road’s unusual name, according to local legend, comes from a large wooden cutout of a finger on a sign pointing to Richmond’s county seat, which was formerly in Richmondtown (Fingerboard Road connects with Richmond Road, the road to Richmondtown). Of course the sign disappeared many years ago but the name remains.

Among the candidates for Most Beautiful Street in Staten Island are these two hidden lanes just off busy Clove Road in Grasmere. While Lakeview Terrace can boast some of Staten Island’s more eclectic examples of houses on its north side, its south side, as well as that of Lake Side Place, has a view of Brady’s Pond (below)

Brady’s Pond with Lakeview Terrace in the foreground

Where: between Boyd Street and Crove Street, Stapleton

Nestled along the series of high hills that runs through Staten Island’s midsection (called Ward Hill, Grymes Hill, Dongan Hills and the tallest, Todt Hill), Hygeia Place is one of two streets in Staten Island named for a Greek goddess. The other is Minerva Place, in New Brighton.

Stapleton, about a mile south of the ferry to Manhattan, was the site of several breweries in the 19th Century and has miraculously maintained its small-town atmosphere.

Hygeia Place used to have the more pedestrian name of Henry Street. By 1912, it had assumed its present name. Hygeia was the Greek goddess of health, so it’s possible Hygeia Place was named in honor of a local hospital…that’s my guess.

Where: between Anderson Street and Tilson Place near St. Mary’s Avenue, Rosebank

Kaltenmeier Lane is a recently paved back alley in Rosedale. Its name is almost as long as the alley itself. Nearby is another alley with a name just as long…Shaughnessy Lane.

Nearby is the fast-disappearing South Beach Branch of Staten Island Railway, which, amazingly, can still be found on the latest Hagstrom even though service ended in 1953!

Where: between Chestnut and St. Mary’s Avenues, Rosebank

White Plains Avenue, along with similarly narrow Oak and Smith Streets, forms a small neighborhood-within- a neighborhood in southern Rosebank. 19th Century houses cluster close to the narrow sidewalks. It’s unknown why this street is so named, but possibly the hometown of an original developer was White Plains.

For your webmaster, White Plains Avenue is notable for what it no longer has. In the late 1980s, long before the concept of Forgotten NY, I discovered an antique bridge with wooden planks spanning the Staten Island Railway at White Plains and Chestnut Avenue.

Of course, when I returned to photograph it in the early 1990s, this relic had been removed, leaving only its abutment (above). If any Forgotten Fans have any information on the old bridge, drop me a line!

Amboy Road is the main road between New Dorp and Tottenville, and predates the much straighter Hylan Boulevard by a century or two. Amboy is a Dutch name; it’s likely that Amboy Road is so named because its terminus in Tottenville may have connected to a ferry to Perth Amboy, New Jersey, just across the Arthur Kill. I am aware of one that was at the foot of Bentley Street.

There are a couple of older sections of Amboy Road, named Old Amboy Road in each instance, that meander off the main road. This one, in Eltingville, branches southwest only to take a turn and recross Amboy Road once again. It gets a new name once it has done so and becomes Albans Place.

Where: between Amboy Road and School Street, Great Kills

It’s not that Seeley Lane is especially tiny, it’s that walking along it you get the feeling it looked about the same 50 or 100 years ago. Sidewalks are still missing and it’s part of a maze of small streets, like Pleasant, Scarsdale and School Streets, that probably make up the original settlement. The DOT has also unusually ignored Seeley Lane’s 1964-vintage yellow and black ID sign.

Where: off Van Duzer and Wright Streets in Stapleton

This is just another in a series of picturesque dead ends along Van Duzer Street, which meanders along the base of the high hills in Staten Island’s midsection.

Where: off Ellis Street west of Arthur Kill Road, Tottenville

Weir Lane ambles toward the Arthur Kill, complete with an ancient dwelling in the midst of junkyards at Staten Island’s rump, the southern edge of New York State. The Outerbridge Crossing can be seen through the trees in the background. The razor wire keeps people off the at-grade Staten Island Railway.

A ‘weir’ is a device for catching fish, as well as a Scottish name.

Another similarly-named dead end, Weir Avenue, can be found in nearby Pleasant Plains.

Where: betwen Barker and Alaska Streets near Richmond Terrace

Woodruff Lane is a short alley between two little-known cemeteries, Staten Island and Fountain. The West New Brighton neighborhood has many notable Victoirian-era houses such as he one at the end of the road on Barker Street.

Staten Island has hundreds of alleys…more to come!

WHO ARE THOSE GUYS (AND GALS) Part 4, Midtown