THROWIN’ EM A CURVE. Lamppost designs at the dawn of the modern era. 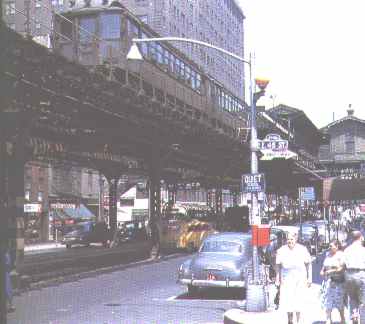 It’s 1950 and on Third Avenue, the el trains rumbling overhead, like the Triceratops and Tyrannosaurs of the Cretaceous, are blissfully unmindful of their upcoming doom. The shrews, rats and moles scuttling about at the feet of the dinosaurs in that long-ago era were equally unaware of their coming hegemony, and the evolution of an obscure branch of their lineage tohomo sapiens and, therefore, world domination (though those Japanese longhorned beetles may dispute that).

So the appearance of a strange, silver colored streamlined lamppost on 3rd Avenue and 46th Street in 1950 was the precursor of the NYC streetscape for decades to come. Who’d’a thunk it?

Photo from By The El by Lawrence Stelter

This prototype octagonal-sided aluminum lamppost, photographed at 3rd Avenue and 46th Street in the early 1950s, differed in several key ways from its even more streamlined descendants.

For one thing, there’s the matter of its fire-alarm indicator light. In 1950, the city hadn’t yet worked out a standard style for how the indicator lights would be mounted, and so they were simply using the delicately decorated beaux-arts style mast that the old cast-iron bishop crooks and Corvington longarms were using. (A remaining example in Coney Island is seen at left)

Later editions of the octagonal pole would mount the alarm light at the top of the lamppost shaft, affix it to the top of the streetlamp itslf (giving it a two-headed appearance) and lastly, use a simple, unadorned pipe to mount the light, which by then had morphed from a globular shape to a more cylindrical one.

Of course, classic humpbacked navy blue and white street signs were still used at this point, and the same brackets used in the cast-iron poles are used here. Later, simple aluminum braces would affix street signs to poles. The incandescent “cuplight” uses a lengthened diffuser, which, believe it or not, are coming back in vogue today on modern “retro-crooks” and Corvingtons.

Many features of this pole survive to this day...the four fluted “feet” on their bases are still with us, after falling completely out of favor in the 1970s and 1980s, made a big comeback in the 1990s. Of course, the poles are still octagonal.

Soon, Sixth Avenue, having been renamed Avenue of the Americas by Fiorello LaGuardia in 1945, would be dominated by the new curved-mast octagonal poles sporting medallions depicting countries in North & South America, as well as the very first greenish-white mercury lamps produced by General Electric and known as Form 109. The 109’s would be replaced by more prosaic GE designs by the mid-1960s.

Early octagonal aluminum octagonal poles all boasted a curved mast with a similarly curved bracket. It was an elegant, stylish design, and many cities in the USA still use it as a primary lamppost design. The curved-mast in New York City, however, would soon be replaced by a simpler straighter mast, as well as the infamous cobra-neck which your webmaster still swears was patterned after the Martian war machines in the 1953 George Pal adaptation of H.G. Wells’ War of the Worlds.

Ah, but the curved-masts, while having no real strongholds remaining, still can be found scattered about here and there… 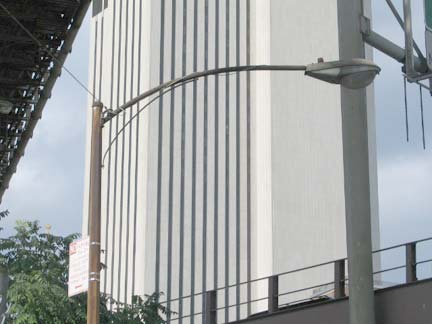 This one is in a Department of Transportation yard under a Brooklyn Bridge approach at South Street. 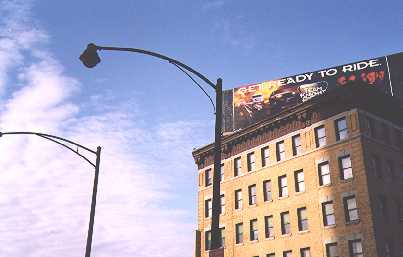 A curved-mast is seen at the Manhattan Bridge entrance at Canal St & Bowery in 1999, complete with cuplight fixture. Its longer-armed cousin, the double-curved post, is seen at left.

The posts were removed when the entrance was remodeled in 2000.

Fairfield Avenue and West 237th in Riverdale, Bronx…where both cornes are ocupied by Curves!

The curved-masts always adapted well to use beneath elevated trains, which remained a special bastion for them well into the 1970s. They could get places their straighter-armed cousins just couldn’t. Here we see examples in Brighton Beach (left) and Bronxdale (right)

LEFT: Again, the el connection. At Hugh Grant Circle in the Bronx (named for a NYC mayor, not the cheeky British actor) plenty of Curves can be found, in both their octagonal and cylindrical shaft designs. A spanking new R-142 subway car runs the #6 route IRT line between Brooklyn Bridge and Pelham Bay Park.

RIGHT: Van Cortlandt Park, Bronx. Highway versions of the curved-mast feature cylindrical poles in lieu of the usual octagonal shape. The New England Thruway kept this style until the 1980s. For some reason, this highway ‘curve’ is found far afield in VCP.

Verveelen Place, a dead end on Broadway in Kingsbridge.

White Plains Road near Pelham Parkway. Under another el.

Retro-crooks: new lampposts designed to be identical to the bishop crook poles which first popped up around 1910 and hung around till the early 1960s.

Corvingtons: unofficial Jeff Saltzman-coined name for the longer-armed cast-iron poles which appeared around the same time as the Crooks and were used to illuminate wider streets and boulevards.

For more on classic NYC lampposts do NOT miss Jeff Saltzman’s Streetlite Site.