WE’RE FADING TO GRAY this week as we mourn the possible imminent death of one of Brooklyn’s last colonial links. Red Hook Lane, running diagonally in downtown from Fulton and Pearl to Boerum Place and Livingston Street, has been there even before the British and Dutch arrived in Brooklyn as an Indian trail, but it looks like it’s about to become yet another of New York’s already sparse alley population to be lost to real estate development.

1766 (left) and 1827 maps showing Red Hook Lane. Many of the streets in the 1827 map of Brooklyn Heights, like Constable and West Jackson Streets, have changed their names; see the Downtown Brooklyn Street Necrology for a fairly complete list.

Like many of Brooklyn’s oldest roads, like Fulton Street (originally Kings Highway in the 1700s) and the more familiar Kings Highway, Red Hook Lane started as a nameless native American trail that colonists found convenient enough to expand. By the mid-to-late 1700s Red Hook Lane stretched southwest to the Brooklyn neighborhood that bears its name and was the principal route for both British and Continental Armies. Red Hook’s Fort Defiance, a five-gun redoubt located at about today’s Dwight and Beard Streets, played a key role from August 27-29, 1776 during the Battle of Brooklyn.

With Washington’s vastly outnumbered troops hunkering down in Gowanus and Prospect Heights, British Admiral William Howe decided to send in an armada to finish them off, but the guns of Fort Defiance forced Howe’s seven ships to turn away. Howe and the British won the Battle of Brooklyn; Washington’s forces took heavy losses, but were not eliminated and fought on. Fort Defiance was destroyed during the battle.

Local historian John Burkard maintains that American militiamen would position themselves along Red Hook Lane and take potshots at passing British troops. One such rifler picked off a British major and one other soldier before being shot and killed himself. The three men’s remains can supposedly be found under an empty lot at Columbia and Nelson Streets. Fort Defiance is apparently unmarked except for a small sign at the Coffey Street recreational pier, about 5 blocks away from its true location. 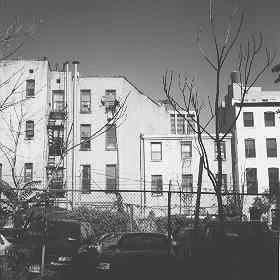 Fairly early in its history...by the mid-19th Century…Red Hook Lane had been truncated to the one-block stretch it presently occupies. Traces of its former longer route are scant, but this brownstone between Atlantic and Pacific just west of Boerum Place has a slanted eastern side, meaning it was built along a diagonal property line running along Red Hook Lane’s old route.

Identity crisis. From the 1930s to the 1970s, Red Hook Lane became the southern end of Pearl Street, which runs, in bits and pieces, from the East River south, beginning its numbering at the river. The only building on Red Hook Lane bears that out, as it’s numbered 415, reflecting its former Pearl Street address. Sometime in the 1970s, Red Hook Lane was given back its old name. Soon after that, the stretch of Fulton Street from the waterfront to the Brooklyn-Queens Expressway was similarly renamed from Cadman Plaza West to Old Fulton Street. Fulton Street had been cut in two with the creation of Cadman Plaza in the 1950s.

Red Hook Lane today. It is threatened by a proposed office tower. Massive plans for redeveloping downtown Brooklyn call for 4.5 million square feet of new office space on four sites, 1.5 acres of public park space and 1,000 units of housing. The city has proposed demapping Red Hook Lane so that a developer would be free and clear to build on it, while community leaders have called for preserving the alley, or, at the very least, creating a way of commemorating it: an office tower, 85 Broad Street, in downtown Manhattan preserves Stone Street‘s old path which now runs through the lobby.

We’d lose a fallout shelter sign and a graffitied face. 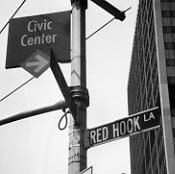 Brooklyn has already lost a Yellow Hook: the then-rural area was renamed Bay Ridge in the mid-1800s after a yellow fever epidemic caused uncomfortable associations.